Help ! Early 120s had a fairly large aluminium wedge between the spring and the axle. This is not the small tapered wedge of the 140 but is a fairly thick aluminium block. I thought I had photographed everything before dismantling but this one got missed out.

Does anyone know which way around the wedge goes ? Big end at the rear or the other way around ?

image.png2170×117 4.99 KB
I think we have discussed that packing piece before so there may be something in the archives.

Urs Schmid has a picture and it looks like the thick end may be to the rear but I can’t be sure.

Viart gives his opinion that it is a racing mod to lower the body but I think that is wrong. It was used because the saddle on the early ENV axle was not tall enough. My later ENV has a taller saddle.

Ultimately you want the wedge to put the axle at an angle such that the pinion shaft is parallel with the gearbox shaft when the car is at normal riding height with average passenger load. They need not necessarily be inline, but they must be parallel to avoid unpleasant vibration. If you put them in backwards it will probably be obvious after you get the car together.

Rob’s right, I’m sure that would be why they are there.
Just one point - yes, the pinion should ideally be parallel with the output shaft inclination (unless you’re doing some aggressive drag racing), but it is important that it is NOT in line through the driveshaft/propshaft. The UJs are designed to work through an angle, so if you have everything inline in road trim you will get accelerated UJ wear. I spent ages researching driveline angles when I was doing engine and gearbox swaps in my Mustang…

Thank you both very much for the advice. I hadn’t thought of drive angles. I have the front of the springs in I now have the fun of trying to stretch the springs to locate the rear. I guess at that point I will be able to judge whether the two shafts are parallel. Sod’s Law says that they won’t be !

I have noticed that where the original spring bushes have flat ends to them, and require a distance piece, the new bushes have a convex end that protrudes belong the spring obviating the need for a distance piece. I have put two flat washers either end of the bush and hope that this will suffice. They are certainly snug so fingers crossed!

Here is the older thread.

Lovers, In working on a friend’s XK140 DHC I noted his does not have the taper wedges under the rear axle, see http://xks.com/i-7087552-12-0053-taper-wedge-axle-to-spring.html At $30 a pop I am wondering if they are really necessary. Can anyone ejacate me on their function? Is it simply to take thrust on acceleration, or is there a more subtle function? Thanks,– –Gary ('56 XK140 DHC S817720) Salt Lake City, United States –Posted using Jag-lovers JagFORUM [forums.jag-lovers.org]–

I don’t quite see why u-joints would wear at all if the shafts were in line, let alone more.
Certainly if the two were at different angles, with non-constant angular velocity they would be trying to beat each other up.
This is why some off-roaders and monster trucks go through a lot of u-joints.

Rob,
Viart’s book (which is fantastic but not always right) says the 140 had some thin fibre taper wedges inserted but the early 120 wedges were quite big bricks by comparison.
Regards

Yes, Viart suffers from lack of pre-publication peer review (we could have caught that one). Schmid has this: 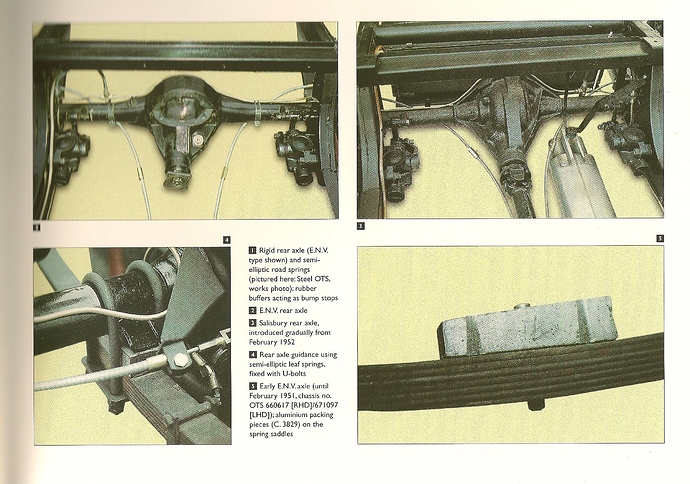 Yes I saw that in Schmids book. And from it it seems that the slope is toward the front. I may actually have got it right ! Thanks for your help.

As I understand it Rob, if the components are all in line the roller bearings in the UJs don’t roll, and can cause Brinelling of the bearing surface. The working angle for UJs is 2-3°, no more.

All this is well and good, but as we’re restoring original vehicles using the correct parts should get it back to what Jaguar specified and that’s good enough for me. Building a 600bhp hotrod is a different matter - Currie set the pinion angle for my Mustang’s 9" at -5°, which is drag-race stuff and not really appropriate given that the input shaft inclination is -3°! I did a little surgery on the spring mounting pads to bring it into cruising spec. Even if the axle is warranted to 1300bhp, I won’t be doing burnouts anywhere in Cambridgeshire…

Racers DO change the pinion angle for more (or less) bite…Ideally, the pinion centerline should be parallel with output shaft, but offset (right-to-left) to promote needle bearing migration.

Does anybody know if original-spec rear springs are available for the XK120? By that, I mean with each leaf tapered and rounded at the ends, as originally done. Aftermarket springs are just cut off square and with no chamfer. Probably makes no difference, but just wondering…

I’ve just had some springs built by Jones Springs of Wednesbury. U.K. they have a web site. Their leaves are tapered as per the originals.

each leaf tapered and rounded at the ends

Eaton Detroit Springs, Inc. [eatondetroitsprings.com] may be able to supply leaf springs meeting original specs. I corresponded with the owner last year and provided specs and photos of original 140 springs at his request, but opted to use after market springs I had in hand from SNG. Blame it on the feeling I was already bleeding money building a rolling chassis. Jaguar is not listed as one of the supported makes so you will have to call and confirm.

Eaton Spring are brilliant - I’ve had a lot of Mustang springs from them (OEM).

I will, however, be going to Jones in the Black Country for my Jag springs as it’s very close to where the originals will have come from. They might, just might even be British steel.

it is important that it is NOT in line through the driveshaft/propshaft.

Important point, and thanks for mentioning it: on my Rover, the shaft is level, fore to aft, but is very slightly offset, left to right.