I know that one of the sump bolts is shorter than the rest, but which one? Viart states it is on the left hand side but then has a picture with one on the right hand side. Also does anyone know why it is shorter ?
Thanks
Tim (GB)

I believe it will hit the engine mounting bracket bolt, That would be the lower front bolt on each bracket.

From memory it is on the right hand side of the car, which is the left hand side when looking up at the block from below. That is it is the side with the oil filter/induction, not exhaust.

I remember using a depth guage to check which hole it was.

Be alert to the oil pan bolt lengths on the 150. The bolt for the right front corner position needs to be a bit shorter than the others so that it will not jam against the lower timing cover bolt. Check out: http://www.jag-lovers.org/v.htm?1235701528 Enlarge the second picture if you need, and are able. Gene McGough XK-150 FHC S834515DN XJ6C II 1976

OK, I was close but no cigar.

Morris, you are close.
Clive is also correct that it is on the right side.
It is the one at the right front corner into the block, and the reason it needs to be shorter is a long one would interfere with the horizontal bolt coming through the timing cover. 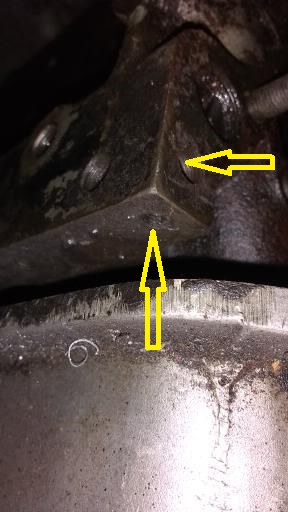 Thanks Guys, Viart has the short bolt a third of the way back of the sump either left or right depending on which picture you look at. I think Rob has got it ( and it prods a memory sitting at the back of my brain) I think it must be front right. I had the depth gauge on both of Viarts suggestions and they were the same. Ill try the gauge on the FR tomorrow and see what I get. As ever, a great facility to ask questions and thank you all for coming to my aid. I have a very early 120 with the aluminium sump. Every bolt position is dished into the sump hence its very difficult to get a seal. I get oil stains running down the sump from each bolt. I have changed the lock washers to copper washers to see if that helps. My worry is that the bolts will shake loose as there is now no locking washer. We shall see !
Thanks again
Tim

I don’t understand why oil would leak from the bolt heads. The gasket should prevent oil getting to the sump bolt holes from the sump itself.

I would think it more likely that oil would weep from between bolts. You can file the sump ridges on the mating surface flat, I have done that on my steel sump.

Yep, I always put Permatex all around each bolt hole.
I see Viart page 176 he has a label 5/16UNF x 3/4" (25) with the arrow pointing to the short one, and 5/16UNF x 5/16" (1) pointing where the long ones go. I suppose that should have been 5/8" long. I can understand why somebody in a metric country would get fractional inches wrong. But the labels are certainly in the wrong places. Page 177 is useless other than he got the fraction right this time.

Hi, Thanks for the continuing interest. I did put RTV (I think that’s the same as permatex) around each gasket bolt hole but plainly it wasn’t enough. I suspect that the aluminium sump has become distorted over the years and is a bit wavy. Ideally I should have had it faced where it joined the block and each bolt hole should also have been faced. I didn’t so now I’m trying to put fingers in the dyke. I’ve tried copper washers but I think they will work loose. We shall see. What I take from this thread is that the short bolt should be at the front right of the sump. I’ve read that somewhere else but can’t remember where. Viart is wrong and contradicts himself (I forgive him. Its a wonderful book), so its good to have somewhere to turn to and ask the question. Thank chaps.
Tim