I don’t find this number in my references. What is the source of this number?

Someone on ebay has one. I was looking for a spare for my 3 1/2 Litre.

i’m not at home right now. I’ll look into it further in a couple of days.

Hello, I was looking at the same distributor cap for 511438 (2 1/2 litre) as it’s local and was also uncertain of it’s compatibility with the DXH6A distributor it’s fitted with, so I did the smart thing and contacted Roger. He was able to inform me that the p/no. is more than likely to be 407288 and suits a DVYH6A distributor (as fitted to COMMER Trucks, a couple HUMBERS and a SUNBEAM TALBOT) .I have been reliably informed by the Distributor Doctor in the UK, that 407279 is N.L.A and he uses 415708 as a replacement. Hopefully this information will be of assistance to you.

Rob,
The numbers are in these ebay ads. 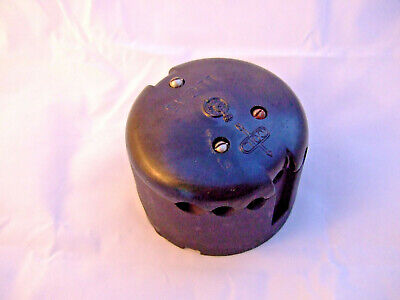 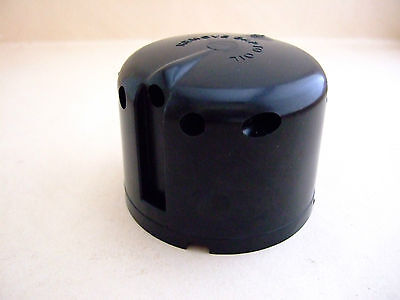 If you want accurate ‘period’ information regarding LUCAS components, your best reference is the ‘period’ Lucas MASTER CATALOGUE. For IGNITION Components the appropriate MC is the LUCAS 710 of which there are about five different editions…, so its useful to check a few of them to see if there were supersessions/updates… See attached page 10 out of LUCAS 710 of October 1948 - this is as far as I am aware the first post-war publication, superseding the pre-war LUCAS 400B… 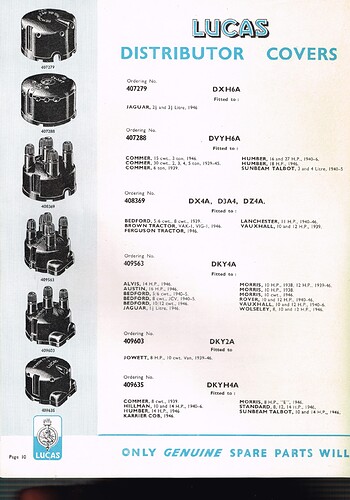 LUCAS 710 Oct19481920×2739 483 KB
Note this Oct 1948 issue provides excellent photographs of all the Distributor Caps that were available from 1945 up to Oct 1948 publication date, and does indeed show the usual Mark IV 407279 but also the 407288 and shows it suits the DVYH6A model range of distributors as suits/fitted to three COMMERS, 2x HUMBERS and a SUNBEAM TALBOT. Now this all came about when Anthony asked for help identifying the advertised ‘407283’ Distributor Cap, that after checking all my pre-war and post war Lucas Catalogues up to the 1970s, simply does not exist, so I then remembered in my box of NOS Lucas parts I recalled having something similar… Sure enough, I found a new old-stock side entry cap, but no box nor labels, but molded into the underside in very small numbers I could see what looked like a molded in 407283, but with a magnifying glass and in direct sunlight could see that the final digit was not a ‘3’ after all, but a malformed ‘8’ which was helped by knowing I was looking for an ‘8’ . So sympathy to the vendor claiming he had a ‘407283’ rather than a correct ‘407288’, as he too does not have original box/label, and I dare say didn’t do his research before listing advert… The 407288 I have is identical to the 710 Oct 1948 photograph, and identical to the advertised (incorrectly) ‘407283’…
Rob_Reilly (Rob Reilly) December 8, 2022, 2:30am 9

Excellent, as usual Roger has the valued information at his fingertips.
It appears from the pictures that the differences between 407279 and 407288 are two at least, possibly three.

Thanks much Rob and Roger.
Regards,
George