I should have known things went too well…

After adjusting the valves on my car, it won’t start - doesn’t in fact even try to start. It turns over, and will eventually pop / bang …and that’s it. You might be thinking a few things:

a) You turned the engine over with the cams disconnected and now everything is all messed up - well, that didn’t happen… sort of. I did have a close call where I turned the engine ever so slightly, but I was able to just turn it back into proper alignment - I don’t think the slight turn would have been anywhere near enough to get the cams messed up - and I was able to turn the engine back the hair necessary anyway. Once I had the cams out, the engine was never turned. Before I closed everything up I verified that the harmonic balancer showed 0 degrees, both cam notches fit with the cam timing tool, and the distributor was pointing at #1 plug wire.

b) Your distributor is 180 out or too advanced / retarded. Possible I suppose, but I did not, in any way. adjust or move the distributor. The car started fine and quickly before.

I noted that in the manual it asks you to set timing with the front cylinder (#6) in compression. I rotated the engine around so that the rotor pointed to #6, the balancer again shows 0 degrees. The notches on the cam for the timing tool are not visible however - which I think is normal. Both front exhaust valves are closed (looking through the oil filler cap) but not pointing straight up - I read a post indicating they should be pointing directly away from the tappet?

SO - what are the options? I plan to pull off the cam covers (again) but I am not sure what to check - I already verified the timing notches line up and fit with the timing tool when the rotor points to #1 and the balancer indicates 0 degrees. I am also 99.999% sure I installed the appropriate cam into the proper side. The changes I made to the valve clearances were mostly minor (0.001 - 0.002 on the intake and the same for exhaust, in most cases giving more clearance, not less). and I am very sure the measurements taken were accurate - I used multiple feeler gauges on either side of the desired value to check for proper clearance both before and after adjustment. I also set the chain tension back to exactly where it was before work started.

Should the cam TDC notches line up when #6 is in compression? If I did somehow get the cams all messed up ( although I really cant see how) what would be the best means of validating and resetting them?

Its always good when you fix a car to run (or not) worse than before.

Cam and ignition are both set with no 6 (front) at TDC, so perhaps your cams are 180 deg out. It’s hard to get the cams swapped, the inlet has the dog drive for the tacho.

To follow on Kevins question, when you say the lobes are not perpendicular to the buckets, where are they pointing?

Ah - good point about the tach drive - I have the cams in correctly base don that.

As for the lobes, looking through the oil filler cap, the front-most lobe is just coming out of opening the valve, so not quite 90 degrees to the tappet, the lobe one back is further rotated to pointing directly away from the tappet. I’ve added pictures of current situation, that may be clearer:

This is the lobe furthest forward, closest to the front. 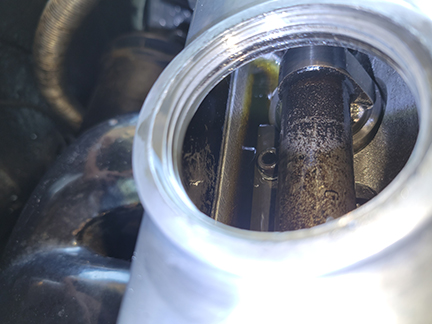 This is the lobe one back from that. 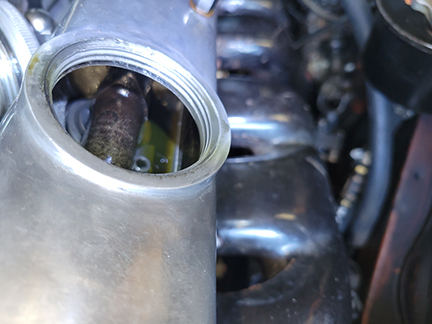 Here we see timing mark more or less at 0 degrees.

Distributor pointing at #6 - more or less. 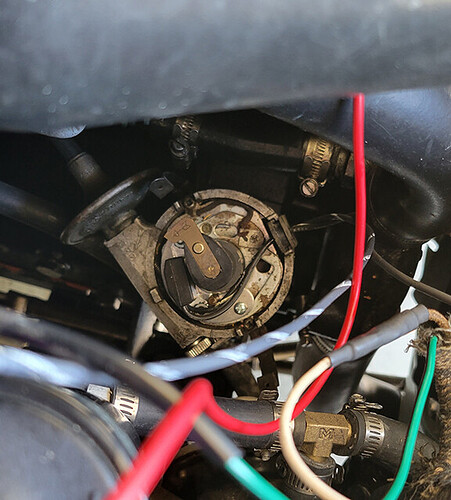 I took out #6 (nearest radiator) spark plug to verify the piston was at the top, and you can see the piston through the spark plug hole. 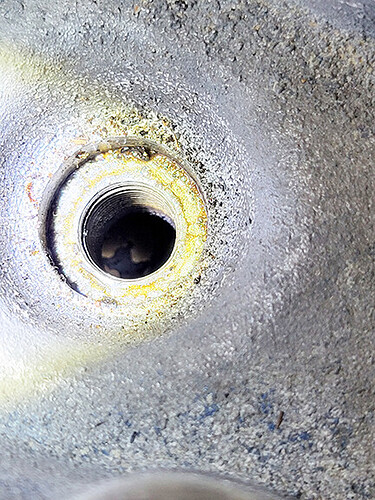 If cam and ignition are both set with no 6 (front) at TDC, and that means you could put the cam timing tool into the slots in the cam, then something is off because as it sits, the timing slots in the cam are at the bottom. I guess it depends on whether #6 is in compression - given that the exhaust valve is closed, I assume that is true.

Those cams are not in the correct relation ship, turn the engine until they are perpendicular and see where the timing marks/distributor are pointing to.

With no 6 at TDC, both valves should be closed and the exhaust about to open. If your cams are 180 out, as it appears, rather than retime the cams, swap your ignition leads at the distributor. 1 to 6, 3 to 4, 2 to 5. Just move them directly opposite where they currently are. Easier, quicker and less chance to damage anything. If the cams are 180 out, the ignition will be firing with either inlet or exhaust valves open at various times causing the spitting and backfiring you describe.

I think I may have the car set at #1 currently in my distributor picture. Its maddening trying to find a proper diagram - but I think #1 on the distributor cap is closest to the block, to the immediate right of the vacuum advance - so I need to turn this around more I think to get it to #6

I don’t think you can turn the distributor far enough; the vacuum advance unit hits the block. If the timing is still correct, it’s easier just to swap the leads over.

Yes. Set it to TDC with the exhaust cam of 6 pointing to the left when viewing forward through the oil filler. Distributor rotor should then be aligned with the no 6 terminal on the distributor cap and the points will have just opened.

Well, I set the distributor to #6 for real this time, which is around the 4 - 5 o’clock position if looking down on the distributor from the passenger side fender. The #6 exhaust valve was appropriately pointing left, indicator on the harmonic balancer at 0 degrees. Once I did that, I realized the plug wires were wrong - 6 on the distributor going to 1, etc. I have no idea how the car ran with the wires wrong, but it seemed to work just fine prior to any work being done. I can only imagine that perhaps the cap was shoved on incorrectly and so when I removed it to check timing and then replaced it correctly, I changed the firing order of the wires. I reset the wires to the proper firing order and that helped, but its still not running.

Now at least the car will crank over normally, no banging. I seems as though it wants to start but will not, and sometimes spits fuel out the carb. I was able to get the car to run, all be it very badly (like on 3 cylinders) with my foot on the gas a little, but other than that - its not running. Ironically, this is technically BETTER than it was before I moved wires around, but the car started, ran and drove quite well before I did any work at all - so its honesty baffling. I’m done for today though. Perhaps I’ll have a flash of inspiration.

P.S. rotating the distributor did act to change the cranking speed and the level of “almost wants to start” - but I couldn’t find a spot where the car would start.

Might be time to go through things methodically from here. If cams are right, set ignition gap and timing so points just open at the firing mark, not hit and miss by moving distributor. Also, have the ignition leads been placed in the correct order? As in correct rotation of rotor? You wouldn’t be the first to get that wrong ( guilty as charged) Spitting through the carbs indicates ignition advanced. Otherwise, check for dislodged wiring in the distributor, or make sure you’re getting spark at the plugs.

This is the tale of two idiots.

The first idiot (The previous owner’s mechanic - I’ve only had this car about a month) Set up the wires incorrectly, and somehow managed to get the cap on so that the firing order worked anyway. When I took the cap off, I really didn’t pay attention to how it was positioned, because they are only supposed to go one way. When I replaced the cap, I replaced it correctly, but this had the result of moving the wires around - thus the no-start issue.

The second idiot (this would be me) upon realizing the firing order was wrong, went about correcting it, all the while FORGETTING that Jaguar distributors rotate counter clockwise( dumb rookie mistake…you’d think after 2 XJ6 and 4 MKII that I’d have this stuff down) - so while I had the right firing order, I did it in clockwise rotation - thus the car almost wants to start and sort of runs on three cylinders if you push it (cylinders 1 and 6 are correct in either case).

I went out and corrected the firing order to the counter-clockwise rotation, and she fired up on the first push of the starter button.

Right now the car is running at around 12 degrees BTDC, I believe 10 degrees is the target for the 3.8 with 9:1 compression. I’ll need to adjust the distributor slightly, then go about dialing in the carburetors, but at least she’s back to starting right - and best of all, the miss is gone. Engine is not 100% silent, but much improved and the engine seems to more responsive - though of course a road test will tell the tale.

Thanks for the feedback and help.

Glad you’ve got it sorted, it can be confusing if someone has been in beforehand and stuffed things up. I had a service manager many years ago whose mantra was " think simple". I had a photocopier that kept blowing fuser lamps, so I got a lamp, my multimeter and started doing resistance\ current\power calculations trying to work out what the problem was. Service manager came over and quietly pointed out that the cooling fan wasn’t working! Sometimes in my haste to find a fault, I try things without thinking things through properly. Take your time and think logically.