I am looking for the correct air cleaner for my 1966 Mark 2 - 2.4 with Solex Carbs. This was originally a British Consulate car.
In Jaguar Saloon Cars by Paul Skilleter, he says " Early and late Mark 2 engine bays - up until May 1960 an oil bath air cleaner was employed, after which the round paper filter was used. In contrast, Nigel Thorley in “Original Jaguar Mk1/ Mk11 maintains " the 2.4 liter continued to use an oil bath air cleaner system, but this was modified with a revised type circular sump and silencer” He later says that the large grey round filter was only used on the 3.4 and 3.8 Mark 2. Additionally, none of the pictures of engine compartments with 2.4 Solex in Saloon data & other books show the large round filter, as shown in the lower picture, but rather the air cleaner in the upper blue car picture. Please let me know what is correct. I appreciate any help,
Gene Kahn 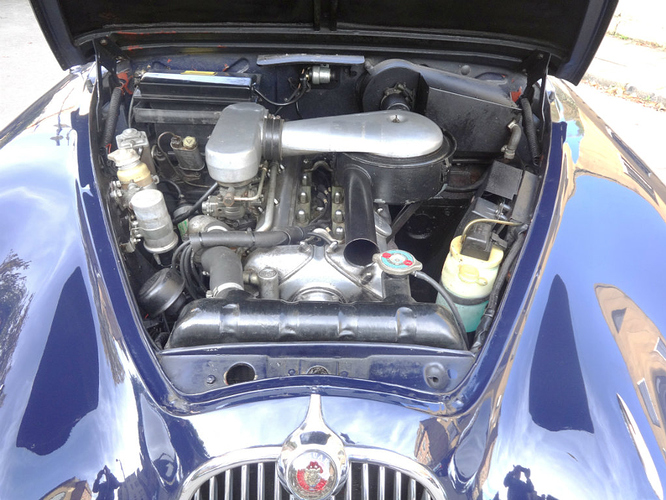 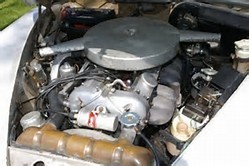 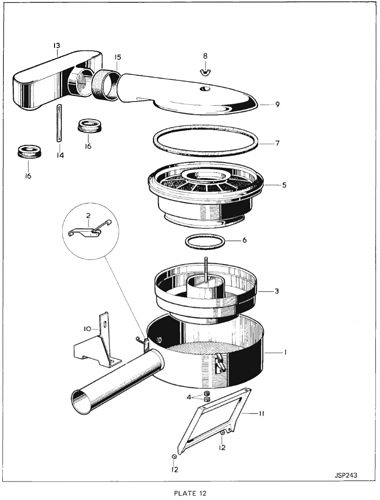 The 240 had SU carbs so is totally different, the air cleaner looks like an oval muffler.

Yes, I see that but my engine is a BJ 5870-8. I see no reference to an oil bath air cleaner for a BJ engine. Any thoughts. Thanks for all your help
Gene 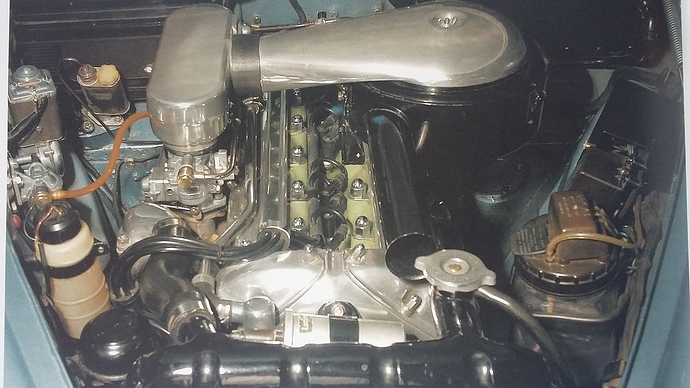 Thanks for your help. Excellent photo

No problem , the book says the glass washer jar was replaced with a plastic one in May 1966

The 2.4 parts catalogue I have says it was first published in April '64 and revised in Dec '69 and it mentions BJ engine numbers in other places, but you’re right, not in the air cleaner section.
I think it is safe to assume the air filter was unchanged for the BJ engines and the revision writer simply forgot to list it.
It wouldn’t be the first mistake in these factory publications. I have counted 62 errors in the XK120 parts catalogue. After all, they were only intended for use by the parts counter men to order replacement parts when the cars were current, not by restorers 50 years later wanting to know what was original.

I’m ready to make that assumption as well, particularly since all of the 2.4 pictures that I have seen show it. Thanks all,
Gene

My UK sourced RHD 2.4 has the oil bath filter.

Never seen them with anything else.

Thanks for confirming this
Gene

to resurrect a thread - I am looking for parts for the air cleaner. Specifically, the donuts between the carbs and housing, the sleeve between the housing and aluminum cross-over pipe, and the two rubber seals in the oil bath unit. Anyone found a supplier for these parts?. Resurrecting a 2.4 filter system and need the lot for chassis 146. Also, anyone successfully converted one of this to a paper filter setup?
(in the diagram - #'s 6, 7 15 and 16)
thanks
Bill

Hi I have a 2.4 with solex and its identicslto top picture . I am trying to find out if there are two flexible rubber tubes whichjoin and go to the distributor back pressure ( one from each carb ) or only one.
Thanks
Steven Eustathiou

Hi Steven you can only fit one hose to the distributor, normally from the front carb, if the back carb has a nipple then it should be capped,