As the car is now back home from paint, I will soon be starting the rebuild.
I was reading Chris Rookes book again in preparation.
I notice that Chris rebuilt the front frames around the engine and gearbox (in position). That looks like a sensible thing to do.
QUESTIONS:

It just appears a sensible low risk method and convenient…but I’m sure there are views on the process. 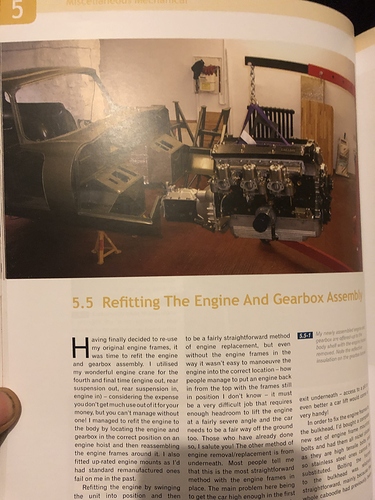 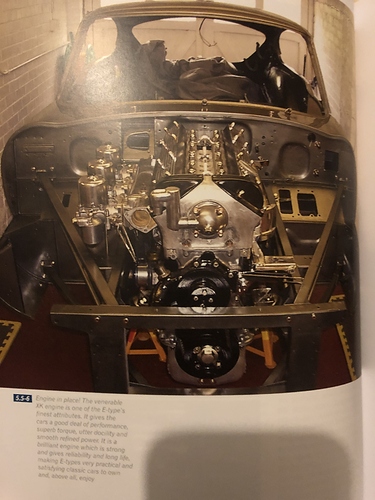 My opinion, FWIW, since I’ve never followed that path…

Once assembled, the engine rests in the frame which puts pressure on the suspension system which transfers the load to the tires.

That’s a whole lotta pieces to attach until it can stand on it’s own.

Obvious advantage: Minimal risk of scratching paint while several hundred pounds of engine and gearbox, dangling from a chain are carefully angled and re-angled into place. And have to raise the front end half-way through the process.

If you get the engine into just the right place first and support the tub properly while assembling and supporting the frame. There’ll be much fewer heart-stopping moments. Miss the pre-positioning of the engine or miscalculate temporary supports and you’ll discover brand-new curse words.

See if the published instructions tell you how to preposition the engine so the motor mounts can be bolted in. IIRC the engine drops into the left one during the traditional process…

As always it’s a trade off. I have built the frames around the engine but that was not on a total restoration, it was a frame replacement and clutch overhaul. So I removed everything from the frames and ‘wheeled the engine plus gearbox out with the frames attached.
In your case I think i would prefer not to have the engine installed until after the wiring looms, brake pipes heater pipes etc etc are in their permanent place. The better access and reduced weight without the engine and trans in place must make life easier?
once everything is installed I would roll the engine in from underneath.
Just my humble opinion
While ever way you choose it’s an exciting time! Keep the photos and commentary coming!

Hi, If I am not mistaken I believe Jaguar made the cars with the engine and frames all attached. It was installed as a unit. I think I recall seeing the engines and body frames in a photo.
Regards,
Allen

That is how I disassembled and then reassembled my Series 2 when I did a firewall-forward refurbishment: 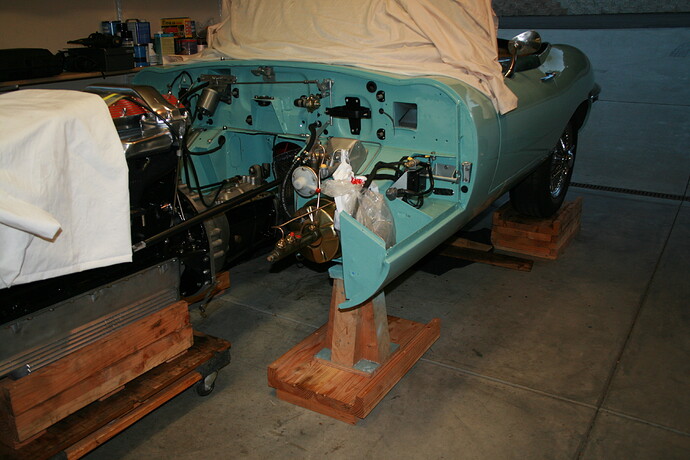 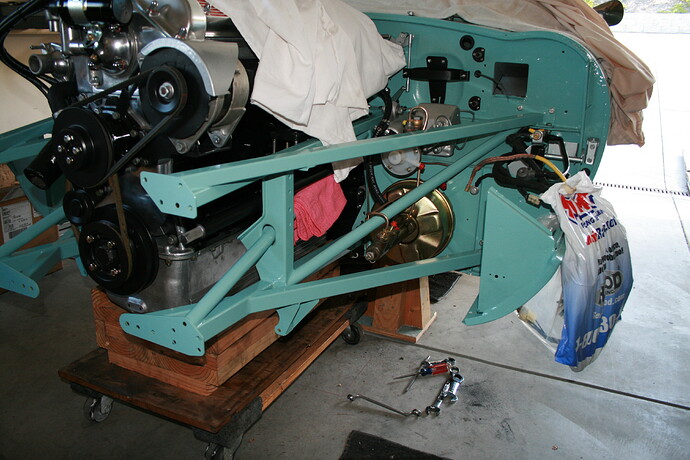 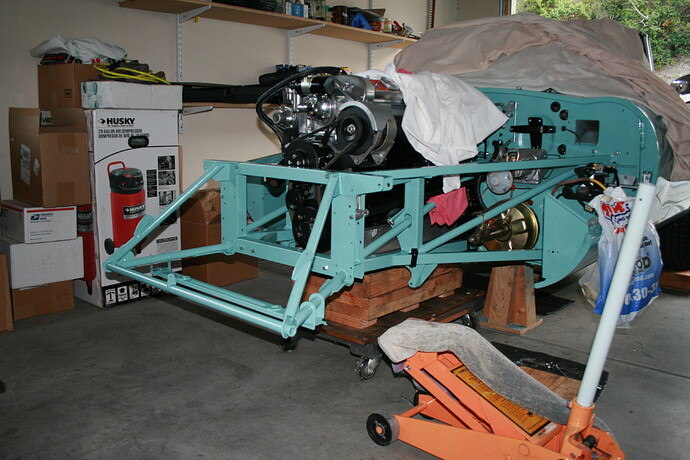 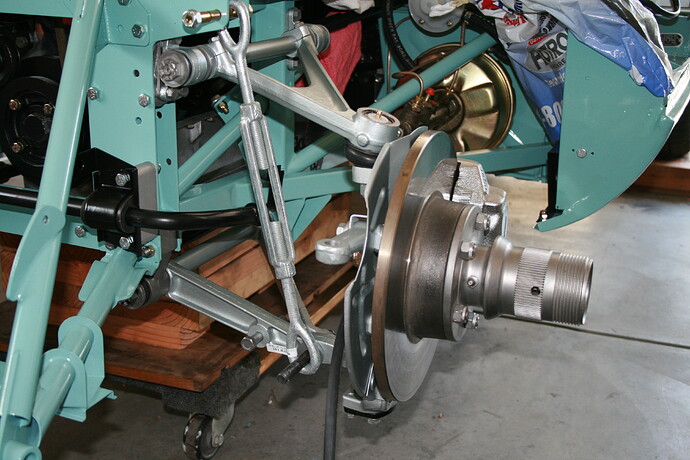 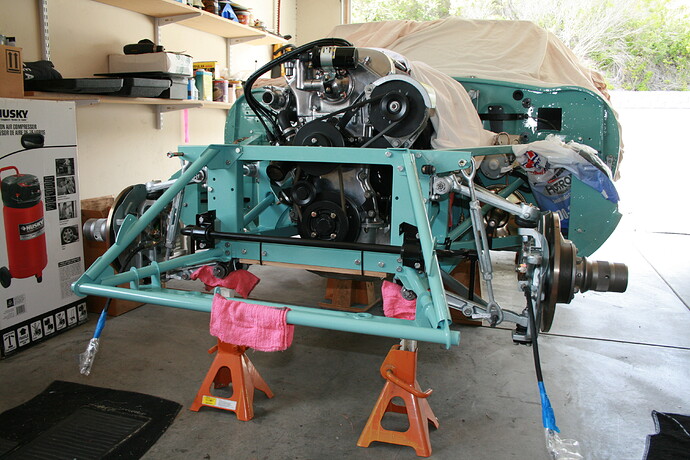 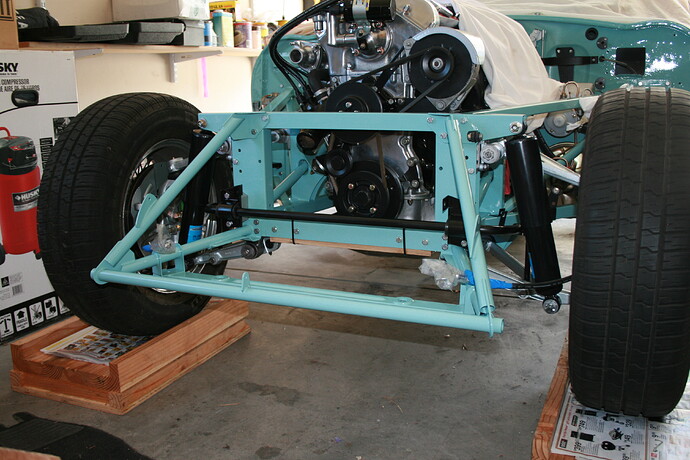 It was an advantage having taken the car apart this way and documenting each step when it came time to reassemble it, as I just did the steps in reverse order avoiding any possible gotyas about sequencing.

That’s very useful to see David thanks. I can see you fitted quite a few bulkhead items before fitting the engine and frames.

What alternatives have people used to replace the rigid fuel pipes from the irs bulkhead to the front fuel filter?
I’d like to use the originals but don’t know how to protect the surface finish…plus they have suffered dinks over the years.
I can reuse the fittings, but what pipe is easily available available? Would copper be suitable? 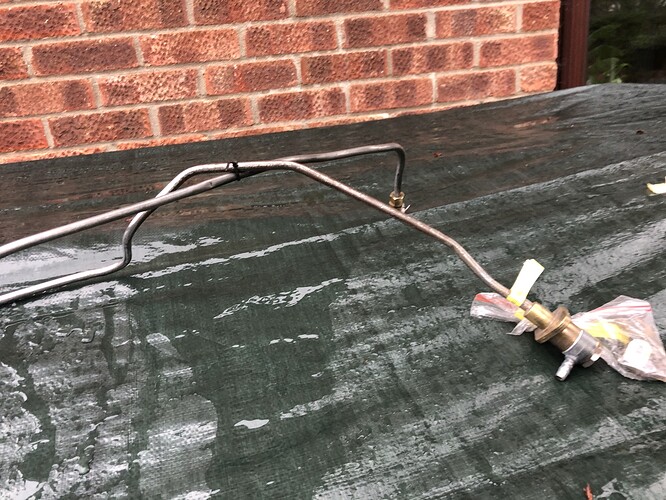 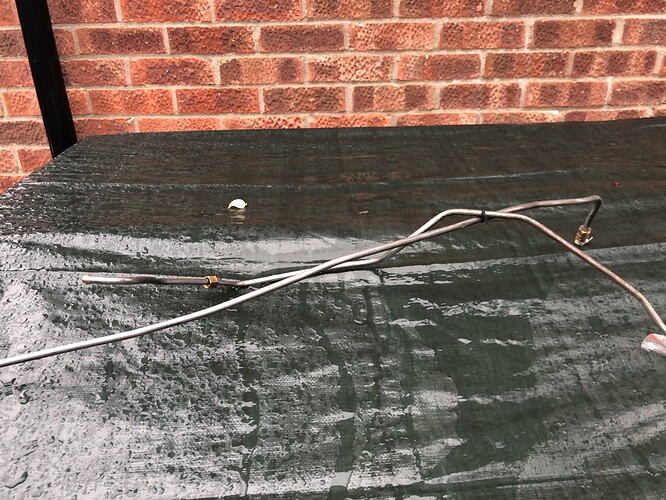 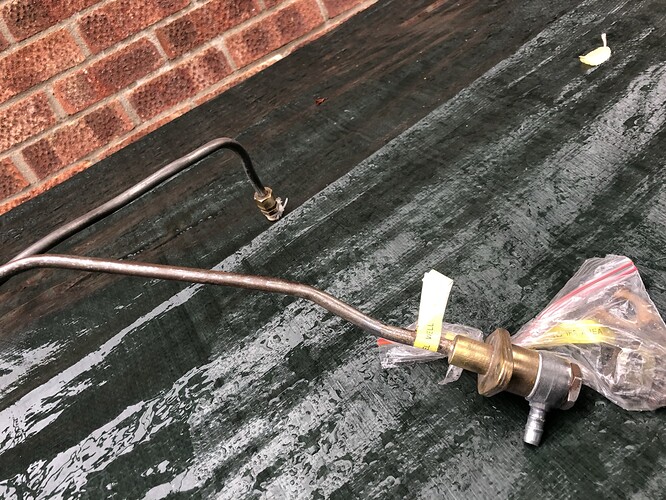 Not copper its far too soft…Cunifer(copper/nickle) is readily available in the correct sizes…a great supplier in the UK for brake pipe/fittings is https://automec.co.uk/collections/brake-pipe-coils

If you need a new “cuss” word, here’s one for you ODERFRIGGALOTZONPEGALUMER…
I use it more and more to help me calm down…
Enjoy the trip Don

don’t know why my emojis don’t print out??

What is the desired gap between accelerator, brake and clutch pedals?
I have the opportunity to adjust so would like to know any views… 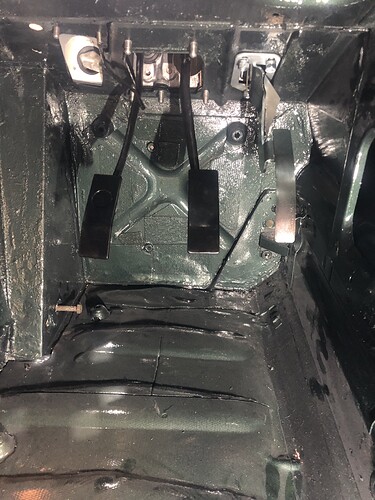 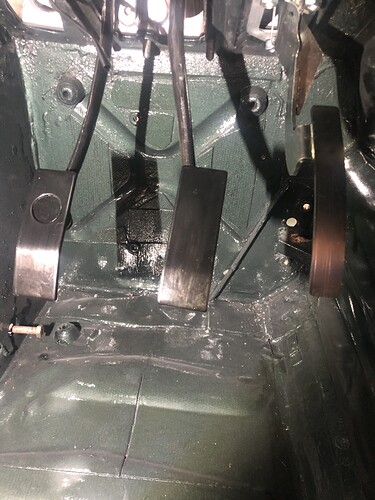 Phillip, I am confused on two levels. I own two 1966 build date 2+2s. Neither have a “suspended” throttle pedal as shown in your picture. The base of the throttle pedal is hard mounted to two captive studs on the floor. Also, I would not consider them adjustable from a gap standpoint, if by gap you mean the horizontal distance between the pedals. You can of couse adjust, to a limited degree, how far up towards the driver they come before they hit their respective stops. 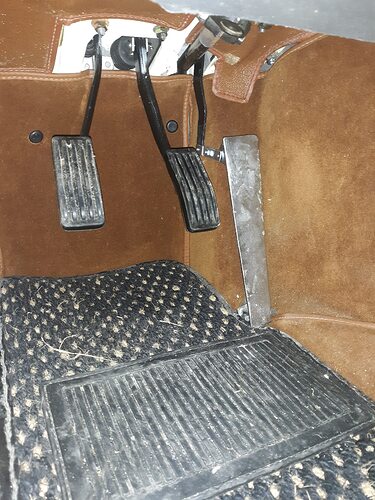 Phillip, I am confused on two levels. I own two 1966 build date 2+2s. Neither have a “suspended” throttle pedal as shown in your picture.

The original poster has a RHD E-Type. The pedal configuration is different. I suspect that any advice on pedal setup from those with LHD cars will have limited benefit to the original poster, as the action of the accelerator pedal is very different.

As David says…it is RHD.

Well, duh, I knew there had to be an explaination. And no long bellcrank rod across the firewall. That would be nice! 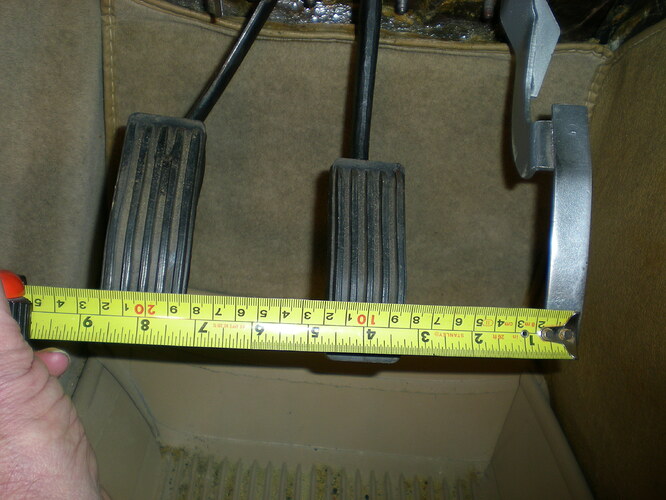 That is just what I was after thank you Phil.
Can I ask if you used heat to bend the arms or just tweaked them cold?

Philip.
I have a friend who runs an engineering shop, he gave the pedals a couple of light swings on a fly-press cold. Using heat would be just as effective.