Hey all! It’s been a million years since I’ve posted here! So I’m, I guess, trying half heartedly to sell my SI XJ6. I’m moving and the house I bought had the garage door removed at some point in the past to finish part of the drive in basement/garage combo, and to get a real garage door installed before winter is just one thing to many to want to deal with after all the other hassles of a semi long distance move! I really don’t WANT to sell it, but it’s the practical thing to do, so I feel like I have to at least give it a try. I’m not willing to cheap sell it too much though, as at a certain point it just really isn’t worth it.

It’s not perfect, but it has some good qualities to it also. A lot of the interior is pretty decent, the body is by and large excellent with respect to rust other than around windshields (mainly rear) thanks to a botched seal job that was done. I hate the people at that auto glass company! It is an eminently restorable vehicle IMO if one wants to get a few things up to snuff.

From what I can tell I think that’s a pretty reasonable asking price for a running, driving, not too bad Series I. If it was some random SIII or whatever I don’t think it would be reasonable, but for a black on black SI… That’s a different ballgame IMO. What do you guys think? I keep getting endlessly bombarded by interested people, and about half the people who have seen it IRL low balled me juuust a bit lower than I’m willing to go.

What do you guys think is fair? And I suppose also, anybody interested that’s in the PNW? I’m secretly hoping I don’t get any credible offers so I can tell myself I tried to do the responsible thing, but shucks I just couldn’t sell it in time! Haha.

After much hesitation I have finally decided to sell my 1972 Series I Jaguar XJ6. It is black... 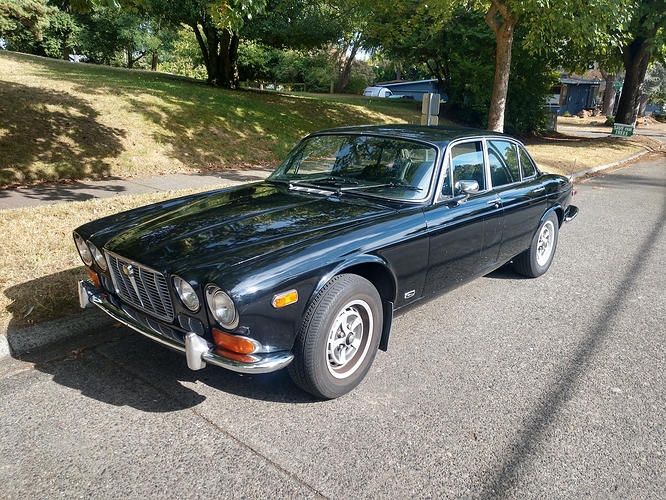 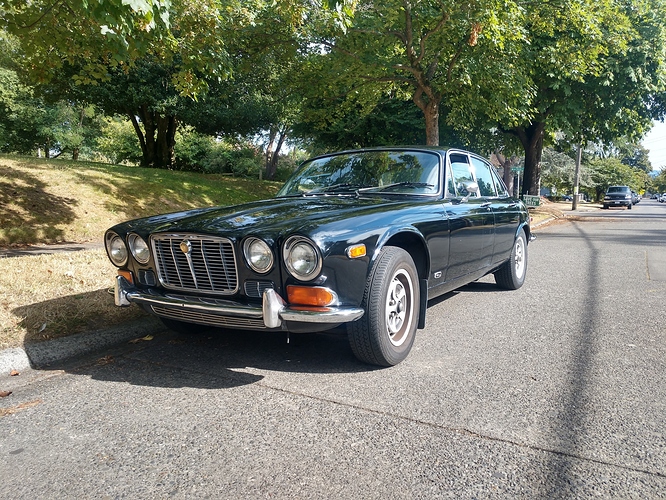 I was just about to comment: I often wonder what cars like this actually sell for, because most I’ve seen, the owners are asking WAAAY more than I think they’re worth.

To that point, $4500 seems a reasonable price, if the conversion was done properly.

Well, it was done with the John’s conversion quite a few years back. So it was done right, but a long time ago. It has its quirks to be sure, but I’m being hyper honest with everybody I talk to about it all.

I think a lot of people have the “But I spent this much money on it!” problem with car pricing. Truth is it doesn’t matter how much anybody has spent on a car, it still is only worth roughly what the market will bear. If I was trying to count up all the money I’ve spent on owning this car for ~15 years it’d be a heck of a lot more than I’m asking, but I have the sense to know that doesn’t mean it’s worth that much. If I spent another $5-10K fixing things on it and getting it really nicely dialed in, I’d probably end up with a car worth only a few grand more than now. That’s just how it is with cars most of the time.

In the grand scheme of things I think the fact that it’s running okay, has a decent body with only a few minor issues, and has some nice qualities to the interior makes it worth approximately what I’m asking for it. One could spend just a few hundred dollars to keep the car a so-so looker but prevent any degradation of the body via rust and just cruise the thing for many years with doing nothing else. For ~$4-5,000 I don’t think that’s too bad given values I’ve seen cars go for on eBay that all had their own issues.

But again, glad to hear somebody else say they don’t think I’m crazy

I’ve had a few offers in the mid $3000s range and I’m just like “Uh, no. I’ll just keep it.” Because that doesn’t seem in line with sales I’ve seen on eBay, and for that little money why would I bother to even sell it? Just as a functional 3rd car it has more value than that to me!

is lack of any engine pics deterring people?
no boot pics?
seems reasonable to me looking from 2000 miles away.

does it have AC?

So in my experience on Craigslist, lack of information doesn’t deter anything. When you leave off stuff it actually just makes more people contact you. I had a TON of emails, calls, and quite a few who saw it. Everybody assumes it’s all perfect unless you state otherwise. So the fewer people you want to deal with, the more specific you get about problems.

On this one I wanted to not get too flooded, but not completely deter everybody right off the bat! Hence a fair amount of info and pics showing some flaws, but not everything. I also ran out of pictures or I probably would have shown some of that anyway. I think I balanced it pretty well, although I could have deterred a few more email tire kickers with a shot of the trunk or not blinged out engine.

It was a model with AC, but the AC has been disconnected and nut running for some time. It’s just a cheap to replace GM unit though, if the compressor isn’t even still good. Might just need a charge and new belt thrown on.

So for all those wondering what they actually go for… I let this girl go for $4200. I really just wasn’t going to go lower than that, as I might as well just keep it at less than that. I think that was eminently reasonable given it being a SI, and with the pros and cons it has. You’d be hard pressed to pay anything less for something in better condition IMO.

It made me really sad selling it… I’ve owned that car far longer than any other car I have ever owned. It was really the first car I ever bought I actually liked too, AKA that wasn’t a utilitarian purchase. I know I’ll pick up another SI someday, but it still won’t be the same car! Oh well, life goes on… Now to shop for a 4x4 for winter I guess.