So, the bottom radiator house from the water pump to the bottom water pipe split on my 1974 XJ6 series 2 4.2 auto.

Ordered a replacement – was told it was part no. C41097 which checked out on what appeared to be reputable Jag spare parts websites.

I’m first to admit I may not be the world’s best Jaguar mechanic but I think I could call myself “competent” but after several hours, I simply cannot get close to getting the top end of the hose over the connection from the water pump housing.

There appears to a flange on that connection (see pic below) and the supplied hose just isn’t big enough to get anyway close to going over said flange, so I’m beginning to wonder if this is the correct hose?

Photographing the hoses side by side and one can see that the inner diameter of the failed hose is bigger than the replacement and likewise it’s about 15 to 20 mm shorter overall than the removed/failed hose.

I’m not as competent as I think and this hose replacement job requires certain tools or skills I’m currently lacking?

A non standard water pump was fitted at some point with a larger diameter pipe connector requiring a different hose?

Anyone shed any light on this as currently I’m currently not making any progress on what I had anticipated to be a fairly routine piece of work.

So many thanks in advance – much appreciated. 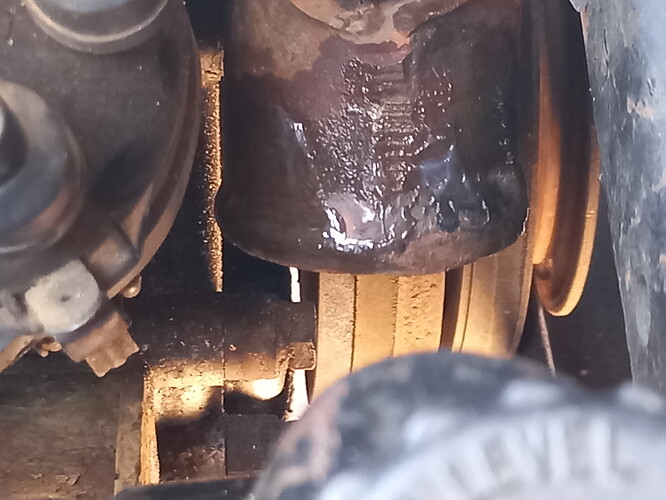 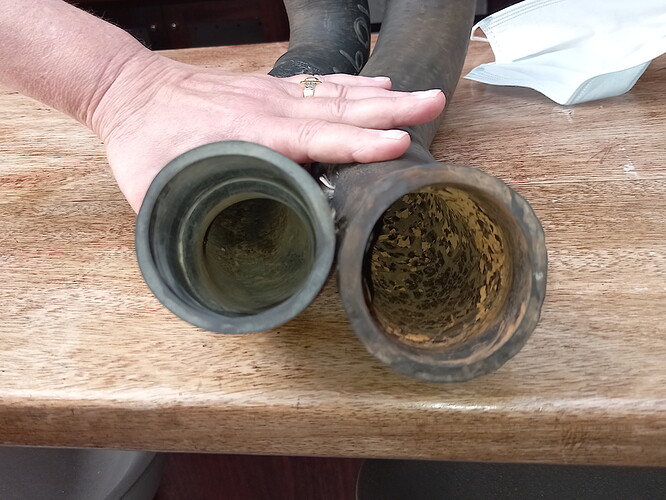 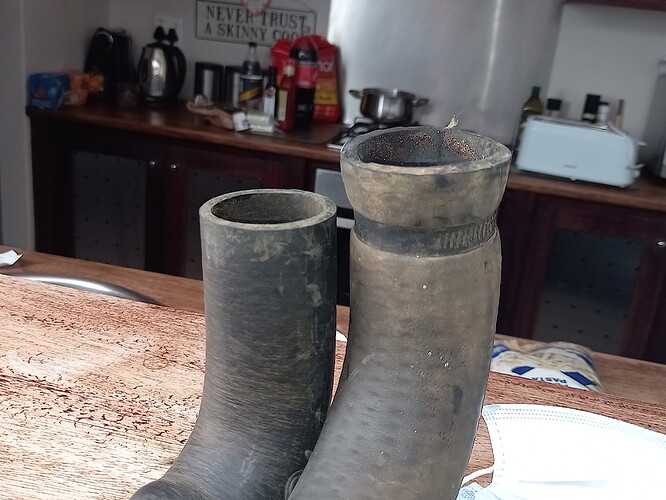 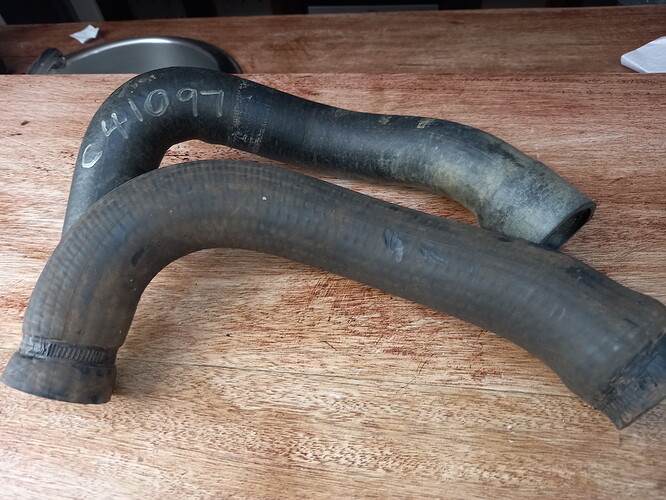 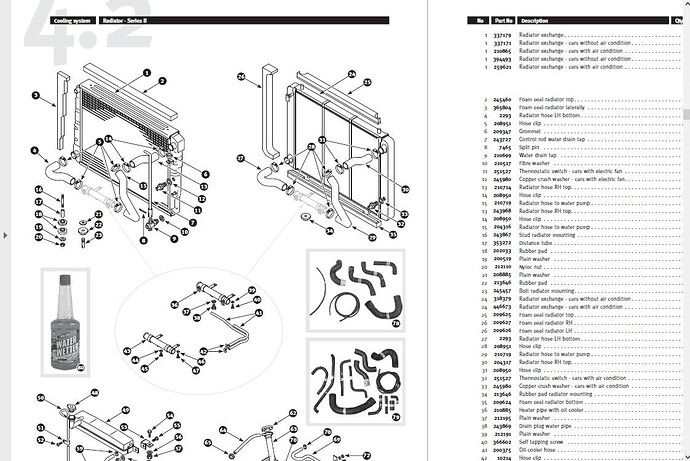 Hi Dave,
Try again with heat and lubrication. Are you sure that the old hose, where not swollen, is actually larger?
I did that hose in a field, still drunk, and while hard to get on I eventually managed to with some heat and dishwashing soap.

Hi Dave,
On the SNG web site they list the part number as C41098. From the photo it appears to have a ‘stretched’ end(can’t for the life of me remember the correct term - swaged?) which would help your cause? Have a look and see what you think.

if I understand you correctly, you’re trying to swap the lower right hose. Then you should need part C41097, as per the original SII parts catalogue. 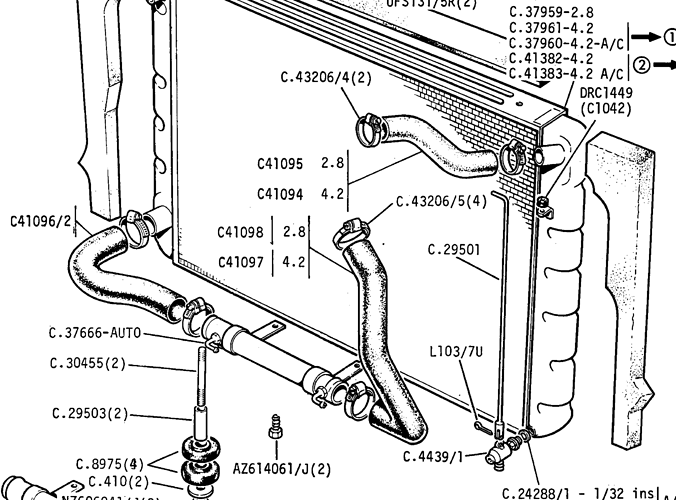 Your spare is marked C41097 which looks fine for me.

Your third pic shows that the diameter of old and new hose is fairly identical, the difference being the “flared” end of the old one. As much as it may hurt but I’m afraid you’ll have to get it in place as it is - in a recent thread someone wrote “like a piano through a revolving door”- dish soap, temperature and maybe the rear end of a coffee spoon may do the trick.

The only spoiler, besides “natural” tolerances of cheap rubber repro parts leaning to the tight side in your case maybe, would be a different water pump. Yet, in the parts catalogue even the picture looks just as flared as I’d expect from your pic: 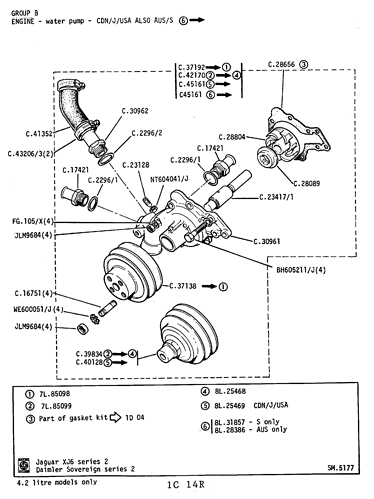 The good thing is that you have to start with the harder end as long as you’re able to twist the hose on. The other end will have to be “easier”, as you won’t be able to exercise more than 10° twist - you don’t want to pull off the other end again …

I had exactly the same problem years ago. Sent the hose back, they sent me a replacement… exactly the same. I was so mad!! I ended up leaving the hose in hot water, stretching it etc, it took hours but I managed to fit it, just about. What a bloody pain!!!

Maybe I should have a few beers before attempting this again! …

OK thanks all - OK so seemingly this is just a b*tch of a job and I just need to persevere - I’ll let those interested know how I get on with attempt no. 2! …

Time for a flex hose?

Here is the end result after a mighty battle… Not fully satisfactory but it held fine for many years. 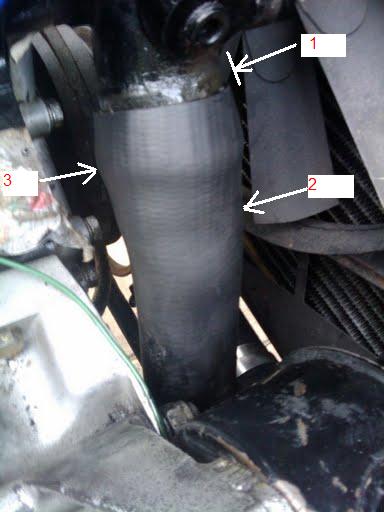 Has anyone ever tired an exhaust pipe expander or similar tool? Warm up the end of the hose and stick an appropriate size expander in there and crank it open. Should stretch the hose sufficiently and evenly enough to get it on. May have to work fast before it shrinks back. Let us know if it works.

Has anyone ever tired an exhaust pipe expander or similar tool?

I’m not sure such methods are a good idea for the reinforcing cord in the carcass of a radiator hose.

It’s not needed. A lever can be helpful but an expander- maybe if you heat it, expand it slightly and then deep freeze it but why!
Lube and heat (so you need gloves) is better.

I have a brand new spare in the boot of my Series 1. I will take a photo and a couple of measurements and post them tonight. Paul.

Hi Jochen, on closer inspection you are quite correct regarding the part number, my apologies

I didn’t think I’d ever get the supplied hose on, in its as-supplied state so – ground out a bevel on the inside of each end of the hose (rinsing well to get rid of bits) – forced top end of hose onto a short section of 55 mm diameter steel pipe – boiled the end of the hose for 10 minutes in a big pot of water – removed steel pipe and forced the same end onto a short piece of 58 mm steel pipe – likewise boiled it for 10 minutes – let it cool for 3 hours to hopefully retain its “stretched” status – a bit of Vaseline on the inside of both ends of the hose. The hose literally slid onto the water pump connector with only the minimum of upward force required – tightened each end and tested at full operating temperature – perfect! If only this hose was made with a 58 mm inner diameter for the top connection rather than the 51 mm as supplied and we wouldn’t have the “piano through a revolving door” scenario – which so accurately describes this job with the as-supplied part!

Thanks for all your help, encouragement and advice – much appreciated.

Sometimes what appears enormous effort ends up saving time, I guess. If you had those steel pipes more or less at your hands the entire operation may have taken about one hour - as opposed to the hours you spent before trying to get that thing on. Still a great idea and wonderful inspiration (I had similar experiences and was lucky to finally get that thing on, but wouldn’t have thought about purposefully stretching the rubber hose).

You might put those steel pipes in a box and rent them out as Churchill tool no. 515558 …

Thanks for sharing your knowledge!

If only this hose was made with a 58 mm inner diameter for the top connection rather than the 51 mm as supplied and we wouldn’t have the “piano through a revolving door” scenario – which so accurately describes this job with the as-supplied part!

**
I can’t but feel that there is something amiss here, Dave…

No manufacturers aim at such mismatches of correct original parts - and I have never encountered the like in three quarter of a century of motoring. It reminds me of Al Bundy’s shoe fitting sessions…

Which doesn’t detract from your endeavors!