My XJ12 started stumbling and I noted smoke coming from under the hood and so I pulled over and popped the hood and found the A5 injector wiring on fire! If anyone drives a classic car without a fire extinguisher, let this be a lesson. I quickly squirted the small flame before much damage was done, but the connector and very possibly the injector itself are ruined. Now my question; Has anyone had any experience with this particular repair kit offered 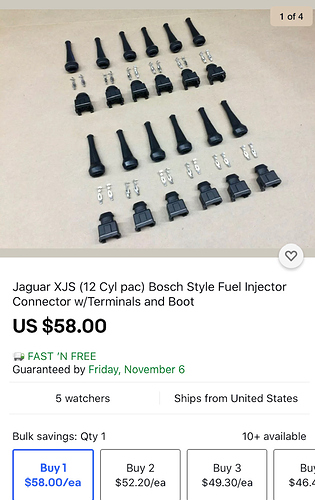 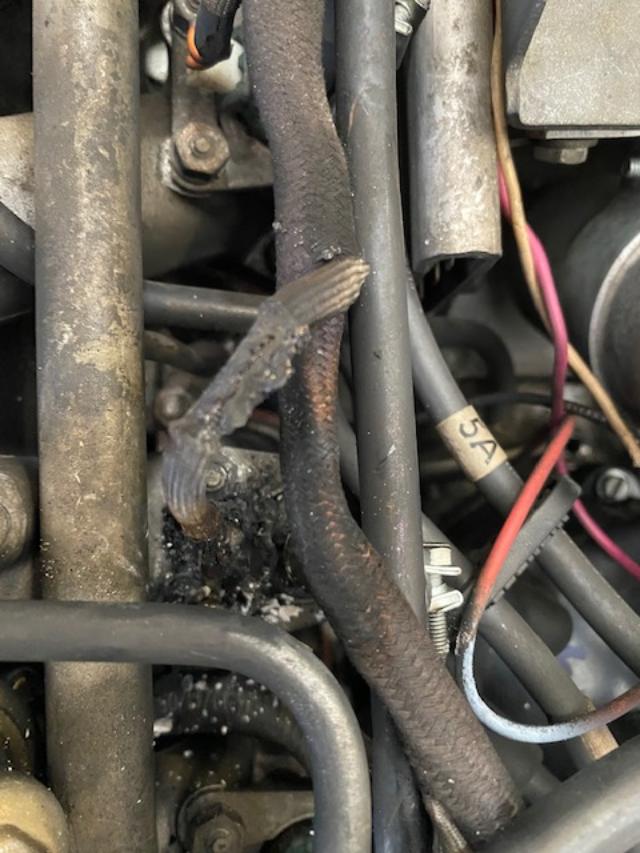 That kit will not fit your car. Early V12s used a different style connector.

My 76 XJ12C caught on fire too so I can personally vouch for Bernards instructions! Except he uses the wrong plugs. Just look for Mercedes parts like this:

Hello David and John - where either of you able to determine what the cause of the fire was - did an injector unit housing crack and leak, causing fuel to be ignited by an electrical spark from within the injector socket - did an injector fuel hose leak, spray onto the injector wiring and have fuel ignite at the harness? - thanks, Tex Terry, II - 1991 XJS V12 Classic Coupe, 1986 XJS V12 Coupe - sent 11/01/2020 2040hrs. EST USA.

No fuel leak. Not clear what the issue was. Only combustable wad the insulation and plastic n the injector.

Hello David - if you are able to determine what may have caused the excessive heat to ignite the insulation, would you post the information - just wondering what may have caused the possibility of the harness wiring getting hot enough to ignite the insulation just at that one injector - Tex Terry, II - 1991 XJS V12 Classic Coupe, 1986 XJS V12 Coupe - sent 11/01/2020 2237hrs. EST USA.

I’m wondering if a bit of corrosion on the connectors could possibly have generated that much heat.

As a side note the car continued to run very roughly until I shut it off. I am guessing the failed injector caused all three injectors on that circuit to stop firing. I am ordering 12 new connectors. Does anyone have a source for replacement connector boots? Based on what I see on your pic, it was not a fuel fire…as you indicated. My guess is the wiring or connectors inside the injector harness connector shorted out. It is highly unlikely that the electrical pins on the injector failed or shorted. They are solidly molded into the injector. The injection harness on all these older V12’s (HE and pre-HE) are now 40 + years old and way past their life span. SD Faircloth www.jaguarfuelinjectorservice.com

thanks for the tip!

I have pulled apart the fuel injection system on my car and sent my injectors to SD Faircloth for servicing. He found all the injectors serviceable, so there was no short in the injector.

In investigating the wiring harness, I found both the wires to injector 4A had the insulation burned off to the point where they join the other wires in the injector harness. Further down the harness I discovered a thin spot of insulation on the orange / black wire common to the 4A injector. I have not run a continuity test on all the injector connectors yet, but will do that before reassembling the system.

Generally speaking, I found the harness to be in relatively good condition, (apart from the failure of every rubber connector boot) considering it’s age. I found all the identification tags for installation on the correct injectors were still in place. There had been repairs to the wiring harness by some PO, which appeared to have been done in a workman like manner.

My plan is to repair the harness, install new boots and recover the entire assembly with new harness tape and a woven cloth split cover. I will send pictures when the engine compartment restoration is completed.