I have used air pressure to keep the valve closed and on some and have used the old socket and hammer method of removing the keepers by tapping on the top of the retainer. Maybe there is a tool or photos of this procedure?

I am not in the process of any of this yet but I would like to have an idea how to proceed. I have pipes without the converters but still have the o2 sensors.

Supposing it can be done without head removal, you have to remove the fuel rail and cam covers. I don’t know what it takes to release the valve stem locks, but whatever it has to be done 24 times, leaning over the wing. Big job!

When I had my heads rebuilt I had them use aftermarket seals that are reported to be much better. I might be able to dig out the source if you decide to do the job.

BTW, this should be posted in V-12 Engine.

whatever it has to be done 24 times, leaning over the wing.

Remember, the OEM nitrile seals are on the intake valves only.

When I had my heads rebuilt I had them use aftermarket seals that are reported to be much better.

The OEM seals are, frankly, garbage. The openings in mine were 10% larger than the stems, which cannot happen from wear. I suspect they were just swollen with exposure to motor oil.

If you want seals that actually seal, you’d need to go aftermarket. Teflon seals actually seal, and you can install them on all 24 valves. You need Silver Seal part number DT1610 or D1610. 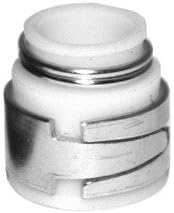 NOTE: These will work with the stock cams but won’t work with any cam with more lift. The seals are taller than the OEM seals, and more lift will cause the valve keeper to hit the top of the seal.

We had some debate on this forum about whether or not actual sealing was a good thing or a bad thing. Some argue that some leakage is necessary to lube the valve stems. If you believe that, there’s no point to replacing leaky seals with new leaky seals. AFAIK, none of us who have gone to teflon valve stem seals have experienced any problems as a result.

And yes, it’s been reported that this job can be done in situ. You’ve gotta put rope or pressurized air into the cylinder to keep the valve from falling in. Fiddly, but doable. It does require removing the cams, though, which means fiddling with the timing chain tensioner – which may open a whole 'nuther can of worms.

Replaced valve seals on my V12 about 35 years ago. Camshaft needs to be removed. (You will need cam alignment tool, and will have to retract cam tensioner) Air pressure is used to keep the valves open. Valve adjustment is via shims below cam bucket. If you remove more than one valve spring at a time, You absolutely must identify and keep separate the spring, shim and bucket as a unit. They must be replaced to the exact valve locations they came off to maintain the valve lash. You will need a couple of days on this. Do not rush it. It’s doable.

If I remember correctly (it was probably 40 years ago) Only the exhaust valve has valve seals. If I were doing the job today I would put seals on both intake and exhaust valves.

My apologies, I meant that only the INTAKE valves had valve seals. (Gotta get some coffee before I write anything else)

Air pressure is used to keep the valves open

Shouldn’t that be air pressure used to keep valves closed

Your are of course correct.
Valves need to be closed so that the valve stem keepers, and springs can be removed. The air pressure prevents the valves from falling into the combustion chamber.
( did I mention I needed coffee)

I knew what you meant but for the benefit of those that might not just thought I’d point that out.

What is the difference between the two part numbers? Is one better than the other?

Dunno, but at this point I think I’d suggest going with Viton seals rather than teflon. Either one works, I guess, but I suspect the Viton seals are easier to fit. And they might be a bit more compact, in case you ever decide to go with a cam with more lift.

Thanks to a post by Kirbert I now have a source of Teflon stem seals. However I see that some people are talking about using Viton which supposedly lets some oil down the stem. These are also available through the same supplier, silver-seal Is there any more information out there regarding the best option.– Mark Brown 71 S3 Etype Ohope, New Zealand –Posted using Jag-lovers JagFORUM [forums.jag-lovers.org]– Visit the Jag Lovers homepage at http://www.jag-lovers.org for exciting serv…

I kinda doubt umbrella seals would work well in the Jaguar V12. The tappets are typically sitting in a pool of oil, rather than oil simply dribbling over rockers as it would in a Chevy lump. Heck, the umbrellas might even cram the oil down the guides!

I don’t know if you can get away with this on the V-12s, but I have been told that on our 4.0s that, in addition to the “compressed air through the spark plug hole” trick method, you can thread a thin rope through the open hole as far as possible, then crank the engine just a few short revs (with fuel pump relay pulled or dist. cap off to prevent starting) until the rope is pushed up and crammed tight enough in that space that it pushes the valve up, too, allowing removal of the keeper (and spring).

The theory is that there is pressure in the exhaust ports, not vacuum, so it won’t suck oil down the guides – and even if it does, it’s just oil in the exhaust tract. Emission requirements might have forced a rethinking there, I dunno. All I know is the teflon seals work fine on the exhaust valves. The Viton seals might too, I dunno, didn’t try those myself. Will the stems get hot enough to damage them? I doubt it, especially with the pooled oil in the vicinity.

Another thing I know: If you go with the OEM seals, you might as well just go with no seals at all. Those things don’t seal.

Geesh, Viton is rated for continuous service up to 400F. At that temp, I presume the oil in the tappet block would have turned to rock.

Why not try a couple of balloons on the end of a piece of plastic tubing (to protect from the spark plug threads) and inflate them? I would have thought a spring compressor would then work, but not a whack with a socket…