For many years my 1984 jag has passed the California emission testing, now it fails with very high NOX emission. Looking for the cause I came across a fuel filter that is dangling down immediately behind the differential. It has two rubber elbow attachments with one degraded/split. Does anyone know exactly what this filter is attached to? Study of the workshop manual seems to not show it.

Also running with a niggling misfire.

So two questions: suspecting a vacuum leak and have two found, The brake Booster and the carbon canister system. Would this result in high NOX?

The above mentioned filter could be associated with the carbon canister system. Anyone have a drawing or can explain here it fits?

I can’t help with the mystery plumbing around the diff.

But NOX is caused by combustion temperatures over 2500F. The solution has been (and still is) Exhaust Gas Recirculation.

So, a high NOX reading means the EGR system is not doing its job. The valve itself could be jammed or clogged. Or the vacuum and/or electrical signals are missing.

The solution has been (and still is) Exhaust Gas Recirculation.

Except that the Jaguar V12 H.E. doesn’t have EGR.

Jaye,
I too have a 1984 V12 HE car - mine is a Eurospec (Germany) Jaguar VDP HE - I am in VA I know the angle part hanging down around the DIFF. Mine is too small for a filter - seem to me more of a check valve for the carbon canister - that on my car was fitted in the engine compartment near the downpipes on the Driver’s side (LHD) - a Mercedes part no less. I will get a pic of the DIFF part in question. My car originally had CATs but they were so compromised that I have removed them. I essentially have returned the car to stock Euro configuration for 1984. There also was an air pump that wasn’t even hooked up - I have no air rails on my engine. Odd.

I suspect you are too lean? Do you have O2 sensors of is it the European computer?
Very cool to hear of another one in the States.
Ian

It was originally sold in Belgium then shipped to Newport Beach Jaguar in California where it had the Catalytic’s installed, resulting in a customized exhaust system.

We bought the car when it was perhaps 6 months old as the original purchaser thought his Wife was unhappy with the low profile that hangs up on most speed bumps that abound in some cities.

I am the mechanic. Not my profession but I have been working on cars since I was 15 years old when I did a valve job on my mother’s car, a Chrysler 300G with 413 cubic inch, and log Ram induction.

As a profession I am an electronics design engineer.

Thank you for the information on the check valve. Do you know the routing path of the rubber tubing?

I am happy to have your message. At times I wondered if any of these still existed in USA.

Well the EGR does not exist on this configuration. That leaves the Vacuum and possibly the ECU or wiring thereto. Already checked the sensors individually.

Thank you for the insight.

Indeed it took a couple of hours to carefully diagram the custom arrangement this car has to then discover no EGR exists. The workshop manual was of little help since it did not address my configuration.

I have air rails, do not have O2 sensors… Air pump connects to downstream of the muffler and before the resonators of one exhaust pipe.

So two questions: suspecting a vacuum leak and have two found, The brake Booster and the carbon canister system. Would this result in high NOX?

**
Nox is formed by too high combustion temperatures, Jaye - as Michael says…

The most common cause is lean fueling, as Ian says - so air leaks is definitely a possibility. Others are, in no particular preference; incorrect fuel pressure, clogged injectors, throttle pot, clogged fuel filter, fuel pump failing, manifold pressure sensor etc - but the tank ventilation canister should play no part. But an injector problem may lead to misfiring…

A problem with the V12 is that engine management is taken from one bank but runs both. So one bank may be unhappy with what it is getting - or of course they may both be…

The sum of the reply’s fairly indicate the vacuum leaks are my best bet to correct the NOX problem.

Interesting comment about the engine management taking the information from one bank only. Would that be the ‘A’ bank?

When the problem is solved I will post a brief review of what fix it.

Found and remedied another issue, (my third so-far), the rubber seals on the gas caps were split, apparently an early version/style. I hand-made/cut 2.6” diameter replacements using 1/8” thickness Buna-N rubber sheet. Drilled out the original retaining rivet on each and replaced with aluminum rivets. Not one of my finest jobs but altogether quite serviceable and clean looking. Removing the seal assemblies was made simple by removing only one retaining ‘self-locking washer’ then angling and slightly rotating the seal assembly to slide out from under the remaining 3 locks. Found the rubber sheet material in the McMaster-Carr catalog. None of the local auto stores had the material.

Thank you for the reply.

You mentioned a niggling engine miss. That alone can cause a fail.

And, unburnt fuel can ruin the cats. Caused by that miss. Don’t ask!!

How old are those BAR OK cats???

Thank you for the information on the check valve. Do you know the routing path of the rubber tubing?

Here is a picture of the “check valve” under my rear Diff. It is red due to overspray when the car was repainted years ago. It is connected to a fuel line hose from the tanks then a hard metal line that appears run to the charcoal canister in the engine compartment. I will see if I can confirm this routing. Is this what yours looks like? Curious if the same place that EPA converted my car to the US did yours. I have paperwork from a shop in NJ that did the certification. 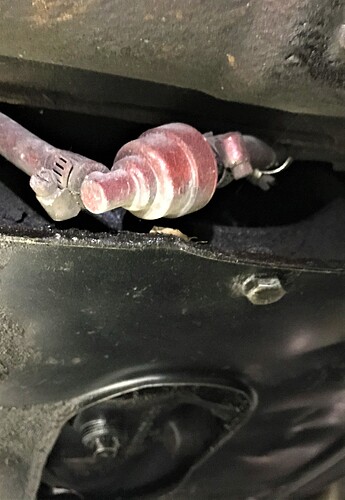 No so much the age as the mileage should count. 45K miles.

Circular logic can be: misfire is possibly due to vacuum leak which results in improper air/fuel ratio. But also could be a fouled injector.

Thank you for the reply.

Appears to be the right place and size. But from memory it does not have the 90 degree fitting on the check valve. I will need to get under the car this weekend to examine it closer. Time like this I wish I had a lift to raise the car.

Thank you for the picture. Makes the matter have some certainty.

The sum of the reply’s fairly indicate the vacuum leaks are my best bet to correct the NOX problem.

Not likely correct, though. Diagnosis isn’t a democracy, the most votes doesn’t necessarily fix the problem. Vacuum leaks generally cause a high idle on the Jaguar V12, little more.

Not sure what the problem is, though. Running lean, maybe, but that would indicate either a sensor or an ECU problem.

Interesting comment about the engine management taking the information from one bank only. Would that be the ‘A’ bank?

**
I ‘think’ so, Jaye - but you just have to trace the relevant items. Like temp gauge reading temps only on the A-bank - while in fact the banks may run at different temps due to, say, a thermostat problem.

Incidentally; water temp sensor may be added to lean running causes, as may the mixture adjustment on the manifold absolute pressure sensor. But as Kirbert implies; a fault must be pursued with an open mind - a one-eyed approach may prolong the agony. Though lean running is fair bet on the high Nox…

If you have the record of the exhaust analysis; lean running usually gives low CO - but if cylinders are unevenly fed, or misfires for other reasons, anything may happen…

Not sure what the problem is, though. Running lean, maybe, but that would indicate either a sensor or an ECU problem.

Most probably indeed.
@jaye has no 0² sensors so ECU feedback is N/A.
Either the base fuel map of the ECU is off, or the Air or Water temp sensor have a problem.

Vacuum leaks generally cause a high idle on the Jaguar V12, little more.

Yes in 99% of the cases because the O² sensors will correct the mixture.
I believe that it will alter the ECU’s fuelling as it has a vacuum sensor. If the base map was set while there was a major leak, fixing the leak would lean the ECU fuelling as it sees higher vacuum.
When I fixed some major air leaks in my car, it changed the vacuum readings enough so the engine wouldn’t run, it would run only if I disconnected the Air temp sensor, and this gave me a clue…
the ECU’s fuelling was lean beyond the O² trimming capabilities and had to be re-adjusted. It took a lot of swearing to figure this out!
Jaye’s car would be even more susceptible as there are no O² sensors and no trimming.

I ‘think’ so, Jaye - but you just have to trace the relevant items. Like temp gauge reading temps only on the A-bank - while in fact the banks may run at different temps due to, say, a thermostat problem.

ECU temp sensor is on the B bank.
If the A bank thermostat is stuck open it could cause lean conditions on the A bank as the ECU will fuel according to the B bank temp reading.

Jaye,
Measure the resistance of the Air and Water temp sensors on hot water to verify that their resistance vs temp values are correct.
These are the theoretical values for the North American cars with O² sensors, don’t know if they apply to your engine. Degrees are in Celsius.

You say you have a niggling misfire…
If it’s because of no spark you would have a rich mixture (and worn cylinders in short order).
If though one or more injectors are plugged and not supplying enough fuel you would have lean mixture, high temps and high NOX.
You should address this before anything. 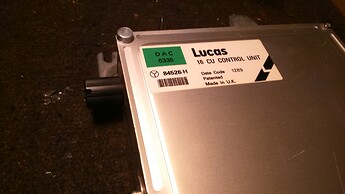 Vacuum leaks generally cause a high idle on the Jaguar V12, little more.

I believe that it will alter the ECU’s fuelling as it has a vacuum sensor.

This is always a brain tease for me. Probably should jump into this so early in the morning

The ECU doesn’t care where the extra air is coming from; it fuels according to vacuum as seen at the balance tube. If there’s more air coming into the engine the ECU will fuel accordingly, correct mixture is maintained, and everyone is happy…

…unless you have problems with certain individual cylinders.

I’ll come back after more coffee

If the base map was set while there was a major leak,

Adjustments made (knowingly or unknowingly) to mask a problem. We’ve probably all fought that battle from time to time!

Had an issue with sending one of my replies today, bounced back.

**
That doesn’t conform to the table in my workshop manual, Aristides…?