I was looking over the hoses on the 1990 XJ40 Sovereign my son purchased. There is a split on the outside of the “Y” hose that runs between the SLS system and the power steering system. We are in the process of converting the SLS to a standard suspension. Looking at the SLS system, once I block off the feed to the rear with the bleeder valve, I was considering pulling the SLS pump loose and removing the coupling. Then replacing the “Y” connector with a regular splice or just pulling the entire “Y” hose out and going ‘no filter’ (and less leak potential leak points). Any advise, feedback or warnings from the group?

That is the way I did a few dozen when I converted these cars ‘back-in-the-day’.

Remove the pump COMPLETE with the hoses as well as the valve block assy.
A flat plate with holes drilled can be installed over the front pump drive hole on the timing cover.

A new single hose to the PAS pump and you are goo-to-go.

A new single hose to the PAS pump and you are goo-to-go.

Was that a Freudian slip?

So did you ditch the filter?

The D just got neglected.

There is usually a filter built in to a PAS reservoir but I don’t remember if there is one in the mineral oil tank. probably not.

They are incorporated in the earlier and later reservoirs that use ATF.

Why not do your son (and yourself) a favor and just ditch the entire hydraulic system. You’re already halfway there getting rid of the SLS rear shocks.

as you pull out a ton of all the now leaky obsolete stuff.

This conversion has been documented on the forum ad nauseam ! But here’s a good video I just stumbled on … 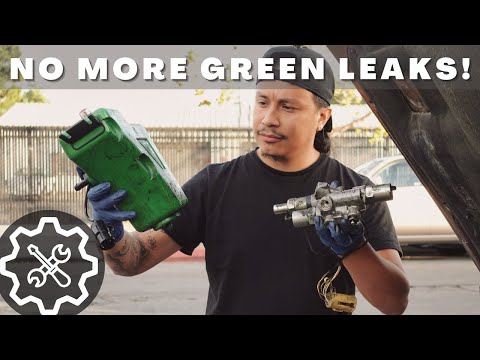