My recently acquired V12 rag top has a small “computer” tucked under the left rear mudguard in the boot, cant find out what it is supposed to do, any ideas ???

Roger,
I recommend that you post a picture of the computer to avoid any confusion, guessing, or misunderstandings.
There is a small Anti-Lock Brake System (ABS) computer in a void above the left rear wheel accessed through the trunk (boot). But that doesn’t match your description of the location.
If that isn’t what you are asking about perhaps it is an aftermarket item like a security system.

Thanks Paul, good idea.
On a wiring schematic it perhaps indicates that this device might be connected to the cruise control. I have not had chance to check if cruise control works. Looks like someone has been messing with it according to the blue connectors.
In the boot it is on the left tucked up under the left side mudguard. Difficult to see or photo, here is the best I can manage. 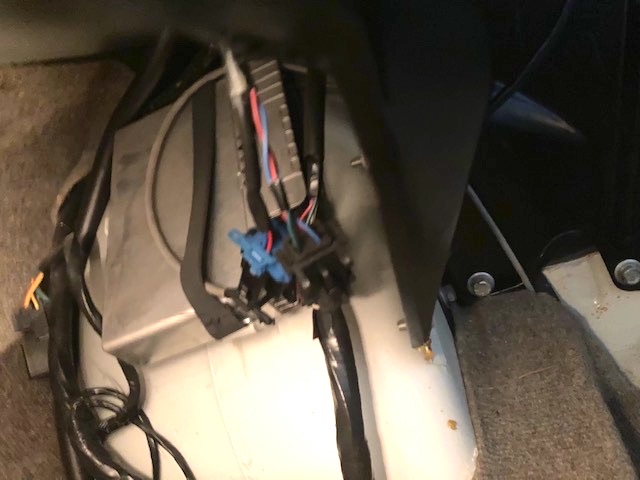 That’s the ABS computer. Here’s what’s on the bottom of it if you remove it. 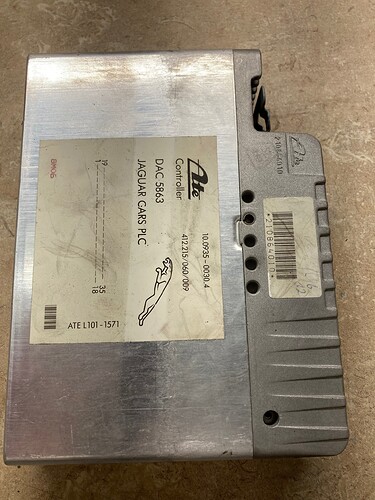 Roger,
That is the DAC5863 ABS computer. Does your ABS system work properly? If someone has been messing with the wires perhaps it has been disabled?
Do the red “Brake” and amber “Anti-Lock” lights come on for several seconds after starting the car? Can you hear the ABS pump in the engine bay operate when you start up the car? Can you feel the brake pedal pumping if you slam on the brakes while driving slowly on a sandy or dirt road?

The blue and black connectors that look to have been messed with, are not. They go to a little black box attached to the back of the metal support that the boot lid struts attach to.

Said box is the Speed Transducer Interface (fancy!), which assembles the use data for the output to the trip computer on your dash.

It absolutely looks like a horrible radio install / is a very sloppy presentation that is thankfully hidden behind the carpeted panels.

Thank you all for your knowledgable Input. Before the snow came I found that only the front brakes were working and no discernible ABS because on our gravel driveway the front brakes would lock up with no ABS pulsing. It will all have to be put on the back boiler for now until I have got into the rear callipers that may have seized pistons.
All of your valuable help is filed away.