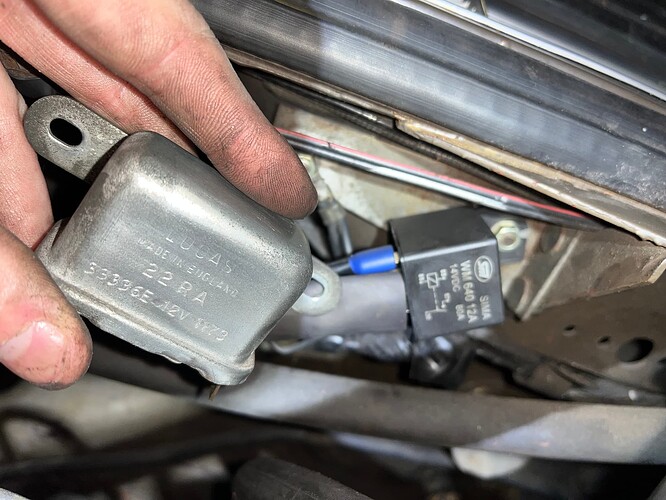 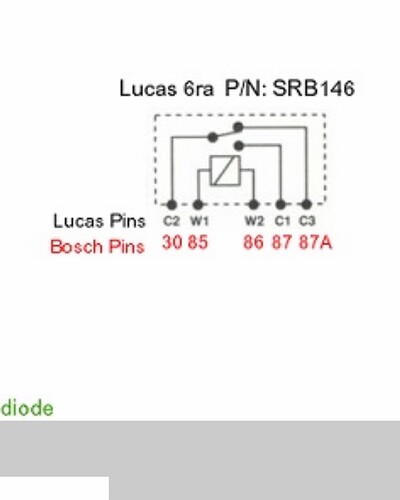 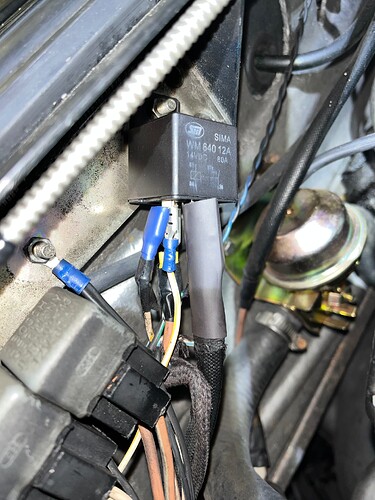 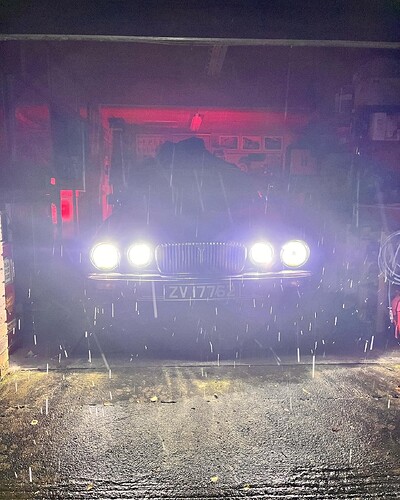 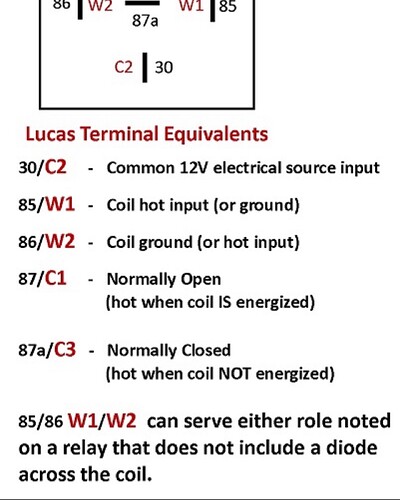 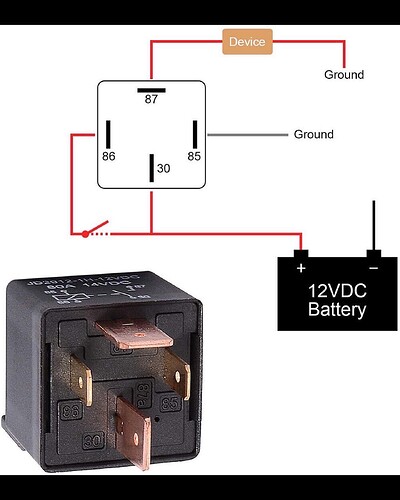 Relays…are a remote switch…that is activated by an electric magnet…
So…first the circuit can be explained by using NO RELAYS…then explained with relays used.
4 wires go to a relay…2 “skinny” low amperage and 2 “fat” high amperage…so a switch that is turned on or off by a human hand. “toggle”…this switch closes the circuit of the skinny wires and energizes the magnet…that pulls down the arm inside the Relay thereby closing, activating this remote switch we call a relay by connecting the fat wires together…
So a human hand activates the skinny wires (via toggle )and the relay activates the fat wires…
Of course…one could just run fat wires to a heavy duty high amperage switch…say a battery cut off switch or a momentary switch…like the black push button on E Types and run fat wires to the black momentary black button from the starter cyliniod to switch and back…no relay needed…and no relay failure…and no towing or mechanic…

Brian,
Thank you…I do understand…(sadly spent say 35 years clueless…sad)…so easy to understand…
But…for me to understand…go back to old school…remove the relays…and explain how this circuit would work using toggle switches…

PS. We can eliminate power loss by going to very heavy fat wire and high amperage switches…I know it would become unyeildy…
Or increasing the voltage…to the point of shock…like the black wire…just imagine using in 110V and 12 V

There is an awful lot wrong with such a post.

Firstly, it’d help to understand what the problem being addressed is and secondly, rather than use a James Joyce type stream-of-consciousness outburst, it’d help to explain what the purpose of the post is in plainer English.

Lastly, a 22RA is not a changeover relay, nor a relay you can just casually swap in or out, i.e. change over with something else.

The 22RA was designed to be ON for very little time and for its contacts to not bounce. That is consistent with it having a coil resistance of just 12ohms (rather than ~65ohms for the 6RA or an analagous Bosch relay), so the 22RA relay winding pulls 1amp rather than ~0.2amps when active. As such, a 22RA will heat up more than a 6RA and that is why it is designed for high current momentary rather than continuous usage. The Bosch equivalent may not have such heavy duty contacts or anti-bounce properties, although being “Bosch”, it’d probably work just fine on a starter Bendix.

Using a relay to power the headlights makes perfect sense, but the benefit lies in its location:- using just a very short run of high current fused cable between the alternator and headlight itself, rather than the convoluted and lengthy run from the alternator to the battery to the battery post to the bulkhead to the centre console, over the fuseboard, then through the switch, back through the bulkhead, straight back past the frame rail again before going on to the lights.

If you look at the archives, relay exchange compatibility has been covered many times already. You can even discover that the ultra rare 6RA for the rear demister can be put together with just a humble 5pole changeover 6RA with a suitable resistor across two of its contacts.

Marek,
Thank you…from you and others some 6 years ago…I learned the very basics of relays…still any circuit can be run “the old way” or at least explained…helps me to comprehend
Again thanks
Mitch

…Using a relay to power the headlights makes perfect sense, but the benefit lies in its location:- using just a very short run of high current fused cable between the alternator and headlight itself, rather than the convoluted and lengthy run from the alternator to the battery to the battery post to the bulkhead to the centre console, over the fuseboard, then through the switch, back through the bulkhead, straight back past the frame rail again before going on to the lights.

Running the head lamps ‘only’ from the alternator, bypassing the light relay, means that they will only work with the engine running, Marek…

Which is no great shakes, but the ‘flash’ function is lost - as is the ‘fog’ function on the European set-up.

Using relays is, as you say, way of reducing power loss through poorly dimensioned wires - and to reduce the load on full flow control units like the light switch. Whether worth while is arguable, but is harmless - as long as the powered wires are suitably fused…

Err, no. You seem to think I am not using a relay or you forget how the wiring works.

Voltage only ever goes downhill, so to speak. Whether a car is running or not is not the issue. The issue is to have the shortest run of cable and a lower voltage drop in the supply voltage.

If a car engine is not running, the highest voltage point on the car is the battery and its voltage is approximately 12.8v

When the engine is running, the alternator will kick in and its voltage is set at 14 to 14.4v The alternator runs the entire electrics on the car and recharges the battery, which is now acting as a reservoir to smooth out pulses of current the alternator produces versus the current drain caused by the components using the current.

Both methods of running the lights see them ultimately connected to the brown wire, so it’s not correct to say the lights only work when the alternator is running. All I have suggested is that much as you originally didn’t want a long run of cable into and back out of the cabin, neither do you want or need to run from the alternator down to the battery and back either - just take a spur from the big brown wire spade on the alternator as your power source to supply the new lights relay. The relay is necessary as there needs to be a method for connecting the power source (brown) to the power usage (blue/red & blue/white) - it replaces a long run of old brown wire and an equally long run of blue/red & blue/white wires which have multiple connectors en route.

There is no argument that this is beneficial. A lower (lesser) voltage drop in the wiring by interposing a relay supplied via the shortest cable possible, missing out all of the bullet connectors will stop perhaps ~0.5v of disappearing as heat. Since power = Vsquared/R and the R of the headlight is the same in each case, going from 13v to 13.5v means you have 7% brighter headlights. That’s a conservative estimate. The wiring run to the back of the car loses 0.25v on a brand new harness and ~0.75v on an old harness - I measure these things as part of the installation of my reversing light upgrades.

The alternator is directly connected to the battery via brown, the headlights and flasher are run with brown and blue - always live - the lights would still work…

There’s always the same voltage at the alternator and battery.

You state power equals V squared R, but I think you meant to say power equals I squared R. It is the current that causes the bigger change in voltage drop because it is squared, thus the reason voltage drop is sometimes referred to as I squared losses. Power also equals V times I, but I am sure none of this is news to you, just a typo.

It says “V squared over R” - the backslash symbol is a “divide” in mathemetics.
“V squared” is the term that is changing, so that is the factor to consider.

There’s always the same voltage at the alternator and battery.

Certainly, David, but the voltage is not constant…

As the alt output is not infinite; with high loads like a depleted battery and/or lots of users voltage will drop. And rpms plays its part, of course - the battery acts as a backstop source when alt output is insufficient…

There still is the same voltage at the battery and alternator. Always. They are connected by a substantial cable.

Completely missed the slash and manufactured my own reading (typo) into the equation, sorry.

You are a true gentleman and I really enjoy reading your explanations on so many posts. Thanks

Thanks for the kind words. All I really wanted people to take away from this is that a standard Bosch relay has slightly different properties to a 22RA and so may not be a good drop-in replacement. The 22RA was presumably spec’d the way it was so the contacts wouldn’t bounce. That’s because ultimately it controls a very high current load once the Bendix engages the starter motor proper.

The 22RA was presumably spec’d the way it was so the contacts wouldn’t bounce. That’s because ultimately it controls a very high current load once the Bendix engages the starter motor proper.

The relay only controls the solenoid, Marek, it plays no part in the actual starter motor current - a crude relay is adequate…

The whole point of a 22RA (as opposed to a 6RA) is that the extra coil current consumption is reflected as a stronger magnetic field to pull the contacts closed more sharply and keeps them closed. Depending on the construction, a crude relay may or may not do that better than a 22RA.

Both bendix and preengaged starters have their solenoids and these are actuated by the 22.
There being a special relay for whatever reason (maybe it is also stronger to stay closed when the starter drops the voltage way down or to open reliably under high current consumption?) just means that a 6RA won’t do forever. Assuming that the 22 is designed fore more positive switching I would stay with it.
A plastic box from China may work the same but it’s garbage optically. What’s the point of adding confusion without benefit.

on different opinions…… I’ve all the information up on both relays If when who ever is interested… 6RA & 22RA …. All up on my page… details