This box was rebuilt a couple years ago with new 2nd/3rd gears, new 3rd/4th synchro assembly (both inner and outer), new layshaft cluster gear and new needles. Since then 3rd speed has been unusable. It’s out now and I’m trying to get as much useful information as possible before I tear into it further tomorrow.

This is how it’s behaving. Screen left is the front of the box and 4th gear, right is towards 3rd gear. Note how it behaves differently.

Am I correct in my understanding that as the fork pulls the synchro back towards the gear, the syncho should spin up, before it finally pulls the outer operating sleeve off of the detente on the inner synchro sleeve to engage with 3rd gear? This is what it does when I shove it forward toward 4th gear. But there is zero friction when it is slid back.

Are there any other tests or checks I should perform before tearing it down to find this or other problems? I haven’t noticed any issues with 1st, 2nd or 4th.

Am I correct in my understanding that as the fork pulls the synchro back towards the gear, the syncho should spin up, before it finally pulls the outer operating sleeve off of the detente on the inner synchro sleeve to engage with 3rd gear?

Erica,
Yes, that is what should happen.
Your post is several days old and I see you got no comments. So it never worked since the rebuild? From what you show, it does seem something is clearly preventing the sleeve from moving onto the synchro and then over the 3rd gear locking teeth. It does not even seem to be trying to engage.
Since you indicated it would be apart by now, where you able to find the problem? I am curious what you may have found. Is it solved?
Tom

Yes I did find it, the synchro sleeve was installed the wrong way around. It looked very much like the illustration in the manual, but it didn’t quite match the description. The side with the taller boss was facing backward and was interfering with the locking ring on 3rd gear. It’s all apart and cleaned up now and I’ll start building it back up when some supplies arrive. The gearbox magic has been greatly demystified in the process.

That is good to hear.
Tom

I find it supremely gratifying when I not only end up the problem solved, but I’ve actually learned something as well.

Unfortunately not all my projects work that way, solutions or knowledge.

A perfect late Nov day in Texas, 70 degrees and sunny. I seized the opportunity to repaint the box after thoroughly washing it out last night.

I also did my best to scrub out the top and and the shift fork assembly with spray cleaners, brushes, compressed air, pipe cleaners and q-tips, then relubed the slides with new Redline fluid using a syringe. Hopefully the Jaguar gods will forgive me for not completely disassembling it, but some cans of worms simply aren’t worth opening. It’s clean and operating very smoothly. 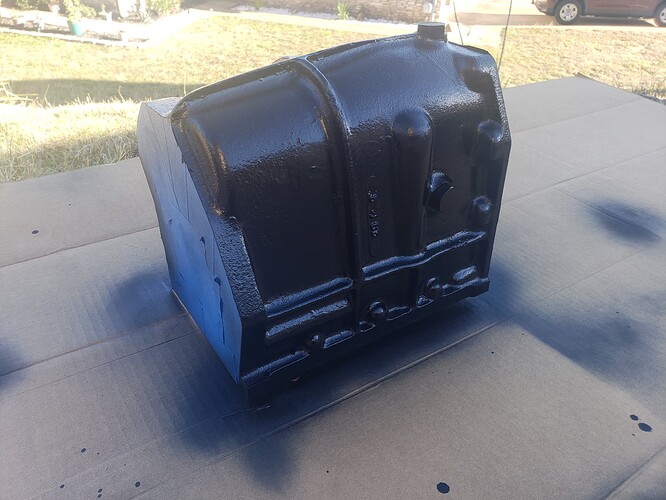 Zombie thread time. The fun has begun again. After over a year I finally have a pristine reverse spindle in my possession, and the gearbox rebuild is recommencing. 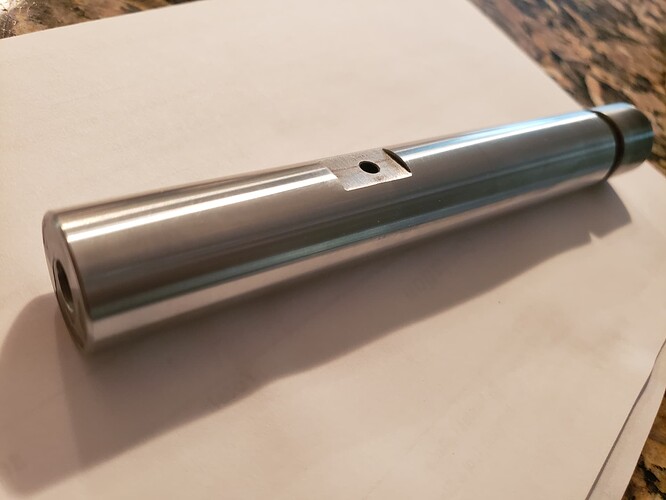 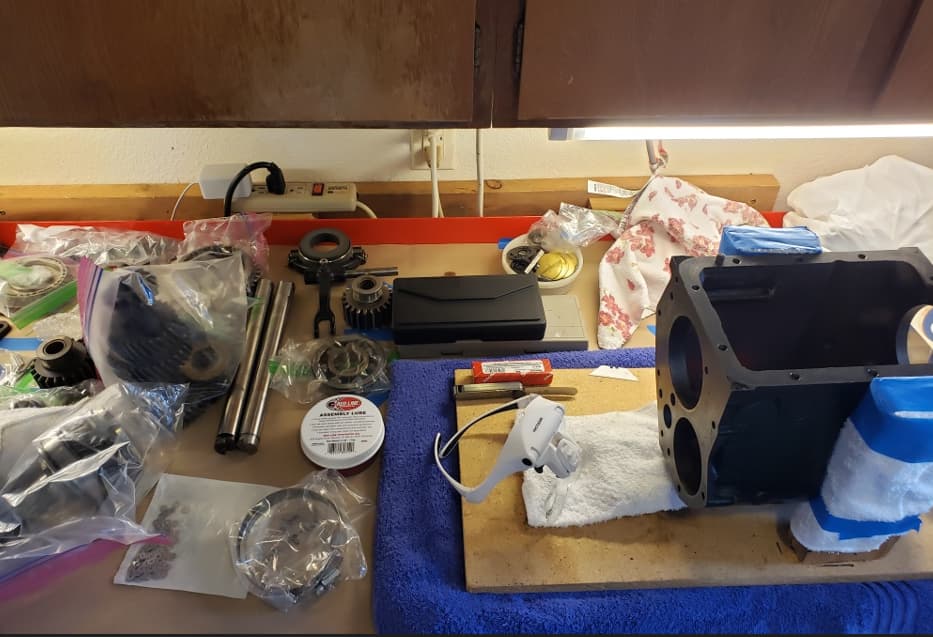 Fortune favors the patient. I also have two NOS Hoffman bearings inbound. I have only been looking for about 6 years or so. Given the state of the post office I probably shouldn’t count my chickens before they’ve landed in my box, but even still, it’s a better day than was yesterday. 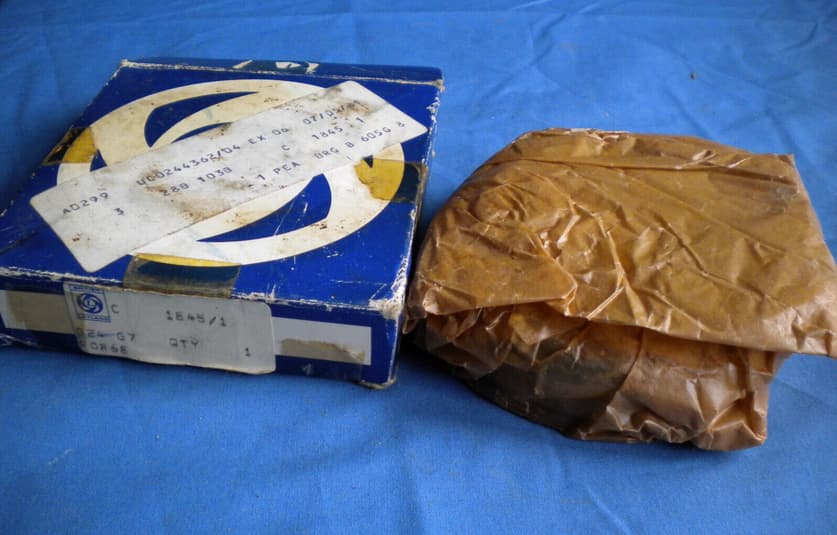 Erica please do lots of photos and posts on your progress …maybe a new thread …rebuilding the moss box?

Moving forward a bit. The only part that appears to have been damaged as a result of the previous rebuild was the 3rd/top synchro sleeve, which is unfortunate as it was brand new. Conversation with Bill leads me to believe it can’t be refinished reasonably so I’m cleaning up and inspecting my original one which has been bagged up for 3 years. It actually doesn’t look too bad. If I can’t find another new one, it will be reinstalled. 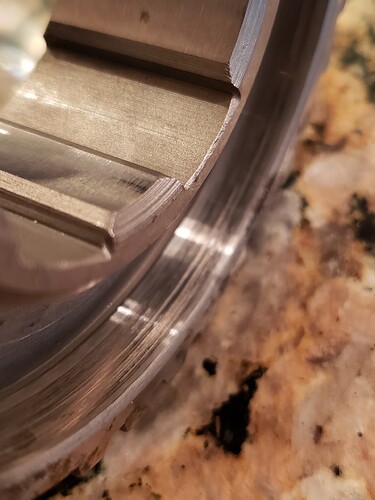 I don’t have a big parts washer so have been using this method for small parts. I use rare earth magnets underneath to remove all the ferrous bits which is most of it. As a friend of mine joked recently, these boxes run in glitter. That’s what happens with steel synchros rubbing steel cones. I’ve decided to make a rare earth magnetic drain plug as a result. I’ve used mineral spirits before but found the smell intolerable, and it penetrates nitrile gloves within 30 seconds and causes bad chemical burns. I’m using paint thinner and a toothbrush now.

I disassemble and assemble these inside a freezer bag so nothing goes flying. Notice the two round shims. I believe these are factory shims. I’ve seen a bunch more in other sleeves. It’s interesting there are just two of them. I have no idea if this has ever been disassembled before so can’t know whether two is the original number or if someone removed them. It seems unusual, but maybe two was enough to bring the separation force into spec. 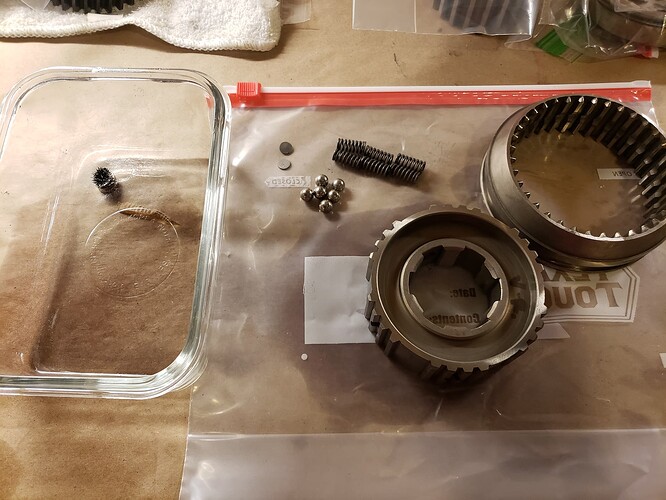 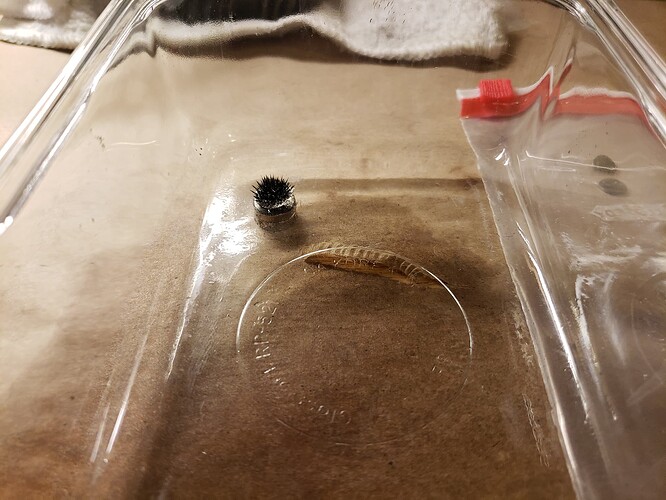 Since my NOS bearings are still in transit I’m again in a holding pattern until they make it out of customs. I decided to remove the clutch which some may recall broke after about 50 miles. One side was collapsed about 3/16". When I unbolted it, the plate moved backwards as normal and now is again parallel. I still don’t know why/how it failed. I can only surmise one spring arm has less tension than it should.

I’m now left with the decision about what to do with the flywheel and new clutch. The flywheel and clutch were balanced independently last time. Now it’s just 250 miles later, but they were rough miles with the clutch juddering severely. One side of the flywheel is darkened. Resurface…again? 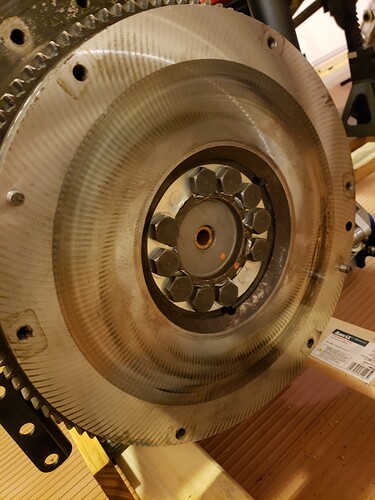 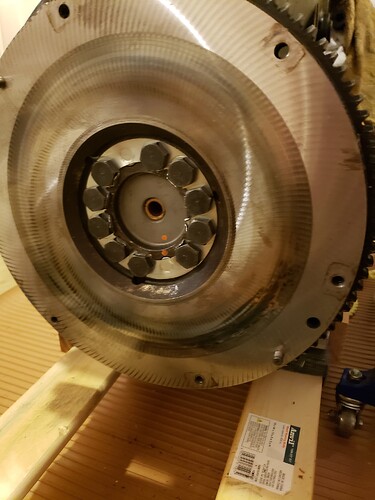 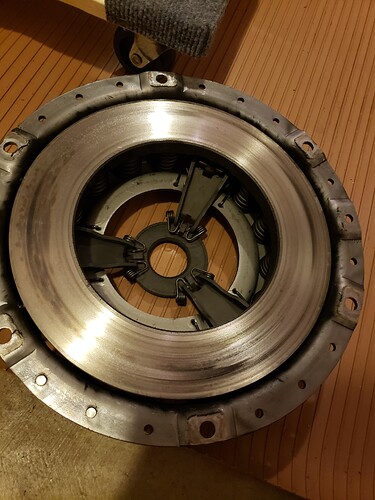 Hello Erica,
If you experienced clutch shudder, I would have the Flywheel surfaced for sure. The swirl marks on that flywheel look deep; can you feel them?
I had a flywheel machined by a local business (that’s one machine I don’t have) and it looked like yours and the swirls were easily felt. I’d already paid for it before I picked it up and when I told the guy the job was rubbish, he tried to convince me that it had to be like that to dig in and grip clutch plate. What a load of Codswallop. Some of these guys must think you came down in the last shower.

I’d also get the face of the pressure plate surfaced as well.

I can slightly feel the machined swirls which is quite different from the job I had done 23 years ago. I was a bit surprise by how smooth the clutch operation felt but that changed once the judder began 50 miles later. I hope I have enough meat left on it for another grinding.

I have a NIB clutch to replace this one. Something is definitely wrong with the one in the photo. When it was mounted the plate was visually sitting crooked and would cause the throw-out bearing to smack back and forth when the clutch was applied. One of the spring sets has more or less tension than the other two sets.

One of the spring sets has more or less tension than the other two sets.

And, if I recall correctly, that is what I guessed the problem would be: I have always referred to that problem as a “collapsed pressure plate” 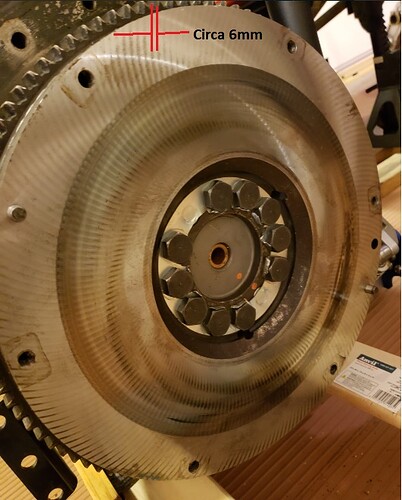 What happened with the NOS synchro hub you were looking at; I thought that would have been your best way forward.

You are correct I can feel these waves with my finger. I’m definitely having bit redone. I’m trying to find someplace that does it in house rather than subbing it out. Would you happen to know the realistic minimum thickness fir these? I’m wondering if I need to go flywheel shopping.

I’m still considering the synchro for sale, but mine looks pretty good I think, way better than the scratched one.

That waviness is due to poor maintenance of the grinding machine and trying to get the last bit of life out of the Cup Wheel used to machine the face. Those lighter swirls on the face of your flywheel would be the crest of the waves. In general terms, friction is not reliant of surface area, but pressure is. That wavy surface would generate more heat than normal and would definitely have an affect of the life of the clutch plate.

These numb nut that try an bull shit their way out of rubbish workmanship, get caught out when they strike someone that knows what they’re talking about and of course, the old story of “we’ve never had any problem with this surface finish in the past” gets trotted out.

Whoever you take the flywheel to, let them know that you know what you’re talking about and what you expect as a finished product. If they scoff at that, turn on your heels.

With regards to the minimum thickness of the flywheel, give me a day to look back on my own records. There is no spec listed in any Jaguar Manual, but I know that I calculated what it should be by the amount of throw, etc.

I’m definitely buying a lottery ticket tomorrow. What are the odds, two 50 year old NOS bearings for a non-synchro box, from the same seller and they’re cherry. I’ve been looking since about 2015 for these. 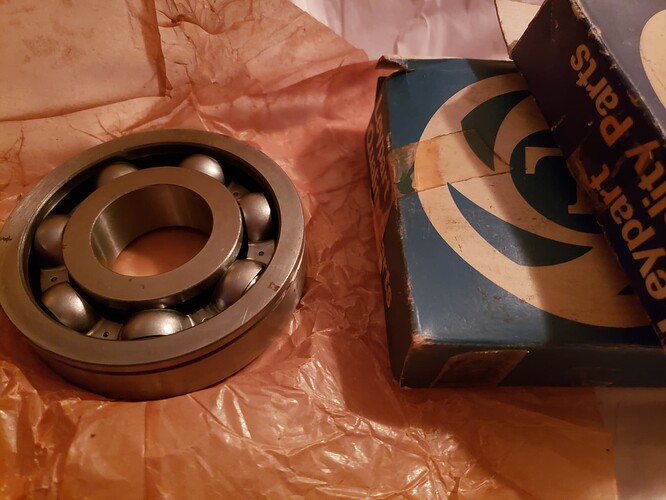 I’m definitely buying a lottery ticket tomorrow. What are the odds, two 50 year old NOS bearings for a non-synchro box, from the same seller and they’re cherry. I’ve been looking since about 2015 for these.

Hello Erica,
That bearing doesn’t look quite right. I think you should send it out here so that I can check it out for being in spec.