Doesn’t want to start at temperature dies out after idle

Have the carbs been re-jetted to suit the larger volume of air that the engine is digesting? And why not SU’s?

Please measure the diameter of the carb throat and come back to us. I had a 2 litre Dolomite Sprint with 1 3/4" carbs. I don’t know that they were even this big on an MGB. Paul.

Sorry but I’m not sure that anyone is going to be able to help you with the description you have given us.

It seems that it will run until it comes to temperature then dies and throttle has no effect. Is the float level too low??? New needle valves fuel pressure 3.5 to 4 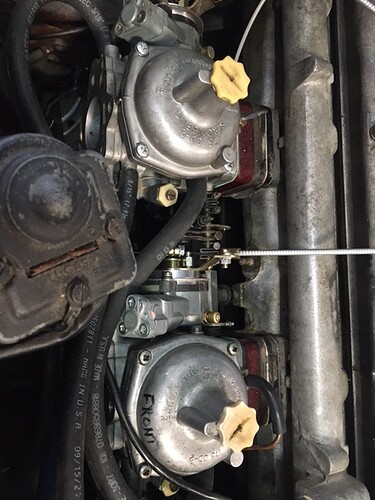 Some of the 175’s do not have mixture adjustment; the needles are fixed. They also have a temperature compensation mechanism controlled by a bimetallic strip that causes trouble when it malfunctions.

I’ll be honest. I have never tried to adjust or tune 175s as we always took them off any of our E Type restorations and replaced then with triple SUs.

I think putting on a set from a car with a much smaller engine capacity (1800cc vs 3800cc) and expecting them to work is hopeful at best. You could try rejetting/replacing needles to approximate what the 4.2 E type had, but this will be costly and hit and miss.

Personally I’d rebuild the SUs and AED you have. My experience with my 3.4 MK2 has been that this system works surprisingly well given it’s relative crudity.

US spec MGBs post 1975 had a single a Stromberg but not sure what size it was. Even had a somewhat problematic automatic choke. Two times 1800 = 3600 so close to the Jaguar displacement.

I didn’t know that; I’ve never seen an MGB with Strombergs so I assumed they had two.

I replaced the auto choke with moss manual choke cables kind of a challenge in itself. I think I have to remove rebuilt carb’s and check float level and needle valve operation. The smog ports in the carbs have also been challenging and they effect the smooth running of the engine currently they are just piped to each other

I have bought a pair of HS8 carbs and manifold from a Series 1 XJ6. These have standard BAW needles. I’m hoping they will be pretty close to being correct, although I will dyno the car to make sure.

These come with all the necessary linkages to install a manual choke, which is what I plan to use.

I’m hoping to put the engine back in tomorrow, so I’m a couple of weeks off driving the car yet.

You have put in those in place of SU? Go back to the SU and fix the ASC. It’s simpler, original, looks better and works really well, in short superior. I prefer the ASC over anything else I know and it doesn’t spew fuel if it works correctly.

I have never tried to adjust or tune 175s

I installed adjustable jets this weekend and they work really well. Much recommended and affordable too: 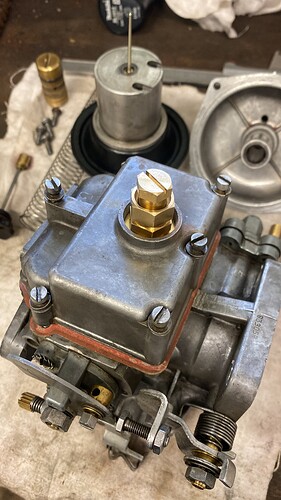 I think these are much better than adjustable needles too. Still not as good as the SU though.

Where did you get the adjustable needles? I have tried to lean out the zenith’s I have and still to much fuel. Fouls the plugs in 2 min

Not needles - jets. A German shop, they say they make these. Also available abroad - Joe Curto?
You need to dismantle the carbs and press out the old jets. If that is too much work for you you might want to look into the adjustable needles, I don’t know how hard it is to install these… and they are more complicated to tune. But are you 100% sure it is not sunk floats, stuck needle valves, or worn jets/ needles?

replaced the auto choke with moss manual choke cables kind of a challenge in itself. I think I have to remove rebuilt carb’s and check float level and needle valve operation. The smog ports in the carbs have also been challenging and they effect the smooth running of the engine currently they are just piped to each other

These auto-choke stromberg’s are truly a nightmare even if they have been converted to a manual cable system. There are several systems internally that are difficult to bypass and can cause an over-rich situation resulting in the fouled plugs you describe.

Best thing you can do with these is cut your losses and either go back to the SU’s or get a pair of earlier stromberg’s that were not equipped with auto chokes. Those will work fine once the correct needles are fitted into the existing jets.

Last time I spoke to Joe Curto about a problem we were having with an MG equipped with the auto choke carb and cable conversion I believe he mentioned that he wouldn’t even touch them anymore - they’re that much of a problem.

Thanks. Now does anyone have a couple of older Cd 2 zenith’s

If you’re in the US check ebay for S1 XJ6 carbs - even a set of earlier Triumph TR6 carbs would work fine too. The carbs and jets are basically exactly the same - just need new needles.

And here’s a You Tube video of a fellow who changed a TR6 from Stromberg carbs to SUs. Full explanation of how he did it. Interesting watch. 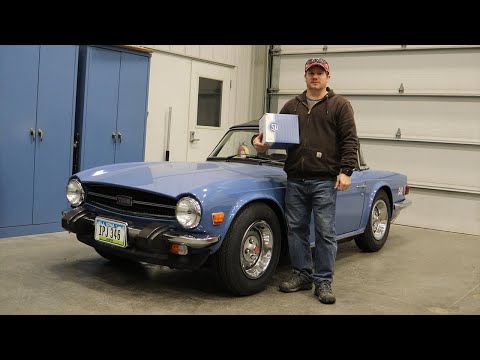