My tech bud said he had happened to stop by one of our Jaguar dealerships here in town (it was next to a GM dealership, where he was shopping for parts for his Yukon) and had “picked up” something for me (hopefully he didn’t boost it, based on his past

) he thought I would like. Turns out it appears to be a new chrome factory badge which reads “5.3 Power”.

Looks very legit, and even has the red 3-M adhesive tape on the back, like the other XJS badges do. However, I have never seen one like it before. Has anyone else? Kinda strange that Jag would put out a new type of badge for a model that hasn’t been around for almost 25 years. I told him thanks, but wouldn’t be interested in putting her on Superblack, since the letter styling is too modern-looking compared to the face-lift font styling. And, in any event, there is already enough badge work on her boot lid rear edge anyway.

However, if I had a 6.0 and it said “6.0 Power” instead, I might go for it. In fact, I’m kind of surprised that when Jag came out in '94 with the 6.0 they didn’t proudly announce that liter size on the model with a special badge for just that purpose.

GM has had a 5.3liter engine for several years now. My guess would be that he got the 5.3 badge at the gm dealer. There is a 6.0 engine in both the GM and Ford lineups, so you might find an emblem you like.

Ah, I wondered about that possibility, although he claimed he got it at the Jag dealership (which also made me wonder if Jag has a model since the XJS that has a 5.3 liter engine ?). Thanks, Timer.

This is my badge… 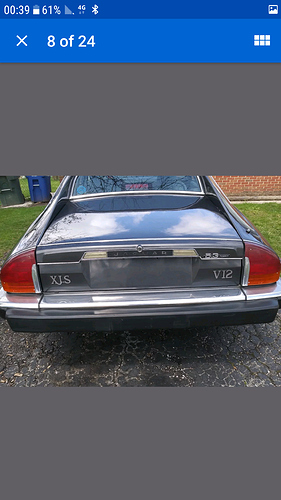