Folks, help me out here. This car has two fluid bottles with distinctly green fluid and one with purple fluid. The seller claims the purple fluid is DOT5 (which is plausible), which he says is for the clutch. And he says the green fluid is “I think what you are seeing is just the color the the plastic in the reservoirs take on over time.”
If you go to the ad, you can look at the pictures and my comments. I am tempted to wave the BS flag but am interested in what you guys think?

It seems to be a very nice restoration over all so maybe I’ll learn something here! 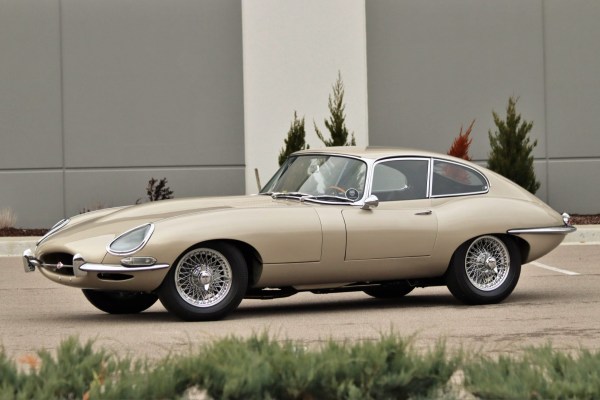 Bid for the chance to own a 1965 Jaguar XKE Series I 4.2 Coupe at auction with Bring a Trailer, the home of the best vintage and classic cars online. Lot #96,887.

Harveys comments are spot on. Very strange way to plumb the clutch, or they thought it was the clutch topping it up…pretty car except the vents.

Not only strange, but potentially dangerous. There is a reason there are float switches on the two brake bottles and not on a clutch. Plumbing it this way, if that is indeed what they did, means one of the brake circuits is without a key safety design feature.

And I don’t get the green color. We’ve never seen bottles discolor like that.

It does look like a nice car that was done to a high standard, although there are a number of things done to be “authentic” that were not done originally. It always puzzles me when someone spends so much time and effort to restore a car like this and then they mess up little things. Like wrongly plumbing clutch and brake bottles.

To my eye, no discolored plastic bottle turns hydraulic fluid the color of green antifreeze, if anything, fresh Dot 3/4 ends up looking old and brown rather than fresh and light tan. Also, at the very least, he should take pictures of the plumbing. I think something is very messed up here, but, I reserve the right to be wrong.

Nice, but weird car. Sounds just like mine driving.

I have to assume the car stops and the clutch works but something has to be wrong in the hookup. Either they have the level sensor on the clutch (a safety issue) or they have mixed DOT 3/4/5 fluids between the front and rear circuits. Also a safety issue.

It must be the curse of OGS cars. The last auction for one was the one that got bogged down in the forged head stamps.

But the Jaguar logos on his knockoffs are painted black

Yeah, one of those little things that are wrong!

I’ve seen brake fluid turn a greenish hue before, but a dark muddy greenish tint from a reaction with copper brake lines. But never a bright lime green like Gatorade. It almost looks like someone thought it was an expansion tank and filled it with Prestone.

Green seems to somewhat common in some GM systems as the fluid gets old. The moist fluid leaches copper out of the brake system. Maybe replumbed with cupronickel lines. I’d question when it was last bled. Silicone DOT 5 in the clutch would allow water to collect in the slave where it could be bled out. Not sure why you’d use different fluids but silicone vs glycol brake fluids is a religious discussion which I’ll stay away from.

So there is a sticker on the heat shield. It says “Only use Castrol/Girling brake fluid (green).”

Uh-oh. Rabbit hole alert! If I Google green castrol/girling brake fluid, there does seem to be such an animal, at least historically. Like maybe from the 60’s?

There used to be Dot 4 products sold in different colors. I think the idea was that if you change colors at each flush it helped you determine when it was safe to stop flushing. It seemed like a good enough idea but then it was banned, I was told it was because they determined it would be confusing to mechanics. I still have a can of blue on the shelf if someone wants it. It should be a collector’s item one day, like laser disks. 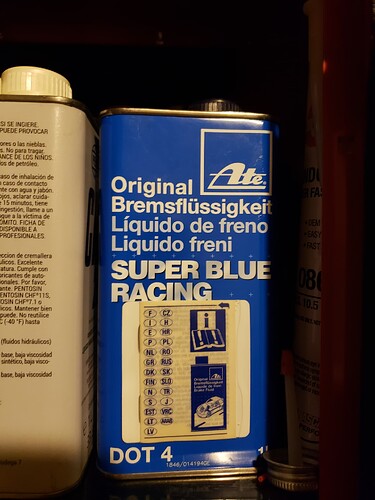 When I first looked at this auction, the green fluid caught my eye too. When I looked closer I wan’t so sure, as the green at the top of the bottles may be above the level of the fluid. I intended to take a closer look, but haven’t got a round tuit since. That said, I have one data point. Conventional Dot4 brke fluid can turn lime green if it is neglected and left too long. Somehow, I neglected to change the fluid in my daily driver Honda Fit for 5+ years, and when I checked this year found it to be a similar color green. Needless to say, I thoroughly frushed the system and replaced the fluid. The BaT car looks pretty but seems to have done vert few miles recently, so neglected maintenance would not be a big surprise…

Ah, but I have learned a new word! Next time I’m going to tell my wife I need to check my Bremsflüssigkeit on the car. She’ll figure I’ll be in the garage for hours, while if I said I’m checking my brake fluid she’d expect me back in 10 minutes and probably have some other tasks lined up for me.

I used to use the Blue and Gold DOT 4 fluids alternately in my Audis. It was easy to see when you had completely bled a circuit as the color would change. Great idea that our stoopid government thought should be gotten rid of for some reason.

There seem to be color standards set by mandate. interestingly there is a green color which I’ve never heard of before.

The colour of brake fluid is controlled by the Federal Motor Vehicle Safety Standards (FMVSS) Commitee under their SpecificaƟ on FMVSS 571.116. This mandates the following colours;
• DOT 3, DOT 4 and DOT 5.1, should be ‘colourless to amber’,
• Silicone DOT 5 should be ‘purple’
• Mineral based brake fluids (LHM) should be ‘green’.

That is the Bentley/RR/Citroen brake and suspension fluid, LHM, LHS2 and HSMO and during some time also the liquid used in Jaguar/Daimler self-levellimg suspension systems.

Very dangerous also to mix the green Citroen LHM (also used by Maserati and RR/Bentley) with any other fluid for brake or clutch systems.
A recipe for disaster, making jelly, ruining the circuits and potentially disabling braking…

It can mix with lhs2 (not lhs). The rest is a disaster in Citroen and Maseratis. In RR/B it’s close to disaster, due to limited amount of seals (only a few in the pumps)… but as you say, quite a disaster anyway.

Based on this discussion, I would tend to think the brake fluid “went green” at some time and did stain the bottles. I’ve never seen this but apparantly @davidxk has! The intent of the sticker on the heat shield remains problematic. If I didn’t know any better, I would source some green brake fluid and, as per the discussion, that might lead to the use of the mineral based stuff, and Oh My!!! I’ve looked at hundreds of photos of S1 Etypes and never recall seeing that sticker in that location.

Unfortunately a typical dealer attitude. “We’ll see if we have time to fix it.”
Even there, I know BAT will schedule an auction when you least expect it, after weeks of waiting.

What do you think this aftermarket (I think) relay setup controls? 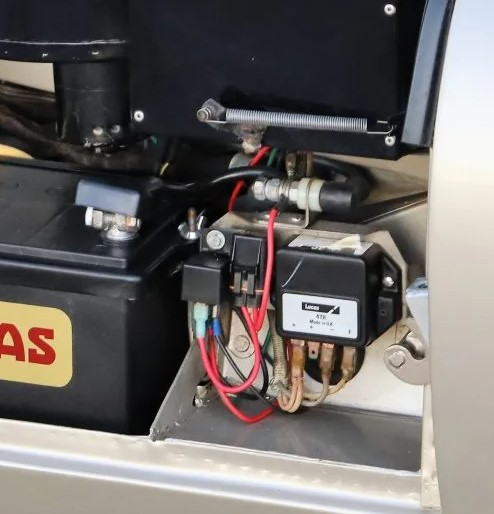