I know there have been several write ups on this. I finally gave up on the garbage pressure switches. 1st one lasted ~6mo, 2nd one last about 18mo (surprisingly), the 3rd one lasted ~2 days. Total garbage.

This is a rev0 configuration that works for now. The switch came from Welsh. The bracket it came with was too short for my configuration so I made another one, about 1/2 in longer. Here is the Jerry Rig bit; I routed the wires throught the bulk head using the 2 of the 3 existing holes for the carpet pad under the pedals, then ran them to the wires at the old switch. So for now I have one screw holding the carpet and the left side tucked away. Works for now. I did not want to drill a hole in the bulkhead. I know JM had a write up on wiring it under the dash which is much cleaner. Installation was easy. Below is a pic. What you are looking at is unrestored original carpet. 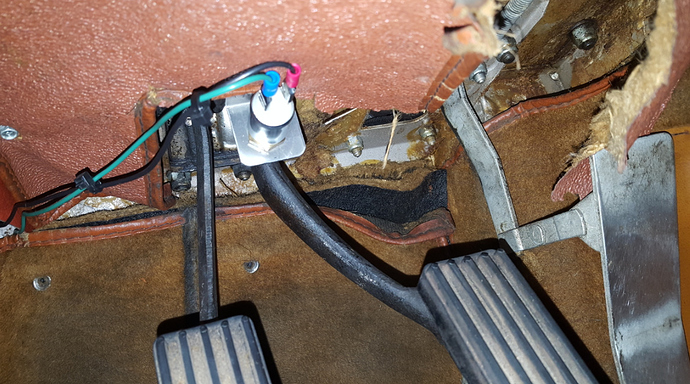 Excellent. Thanks, I too have grown tired of inop pressure switches and have been considering alternatives.

It is the way to go. More than once I had folks tell me on the road that my brake lights weren’t illuminating. The best one I tried was a VW pressure switch but even that one would only come on when I stopped on the pedal rather than lightly applied it.

FYI, no kit is necessary for this. There are some old posts about this that described a common Volvo mechanical switch. It was less than $10 on Amazon and it has a decent amount of threading for adjustment. It took 30 minutes or so to fabricate a bracket out of some strap steel. Also no reason to wire it all the way out to the engine bay. There is a multiway connector for the lights in the left corner of the dash so I was able to run wires behind the trim panels just a few feet from the switch. Between that and the LED taillight kit from XKs I have a lot more confidence that people will see me stopping.

Excellent. Thanks, I too have grown tired of inop pressure switches and have been considering alternatives.

An excellent thread on how to fabricate the bracket, buy the switch at any local parts house and wire it can be found here:

All: Thanks for the input. I agree the reasons not to outweigh the reasons to do it. So I’ll hook it up to fuse 6.

I did as Erica did… except I used the original power wire, just re-routed it.

A step backward, after making a wrong turn, is a step in the right direction.