I could use some suggestions on what you all have done to position the coil and routing of the spark plug wires. Comments are welcome but feel free to show off your work with pictures. I am also interested in where to obtain the parts/pieces.

Thanks to all I am truly grateful for the forum and the folks who share their accomplishments with their cars.
Below is an image of how my engine appears now. What would you do differently?
Maddy 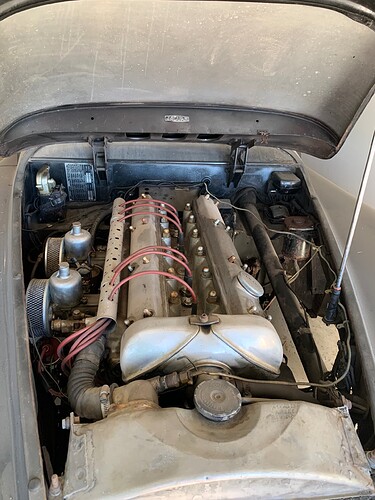 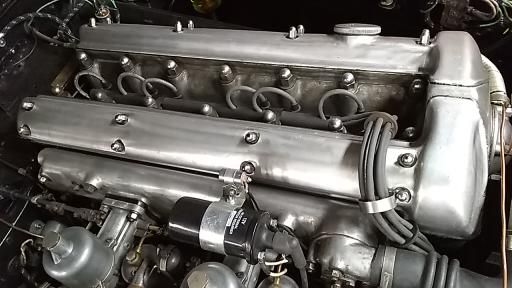 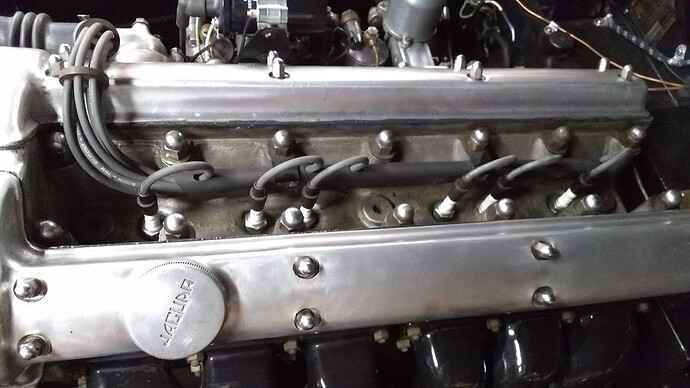 Rob’s photos show a typical set up. Some prefer to route the spark plug wires over the front of the engine, but I prefer Rob’s setup as it doesn’t obscure the front of the head and cam covers. Maddy’s metal conduit is not correct. The proper style conduits, as in Rob’s photos, are readily available in red or black from the usual vendors. My understanding is the red and black were used interchangeably during the XK years so either one is correct. I stand open to correction, but I believe the mounting brackets on Rob’s are for a later engine with lift pieces mounted at head bolts 2 and 6 counting from the front; consequently, the conduit tabs are at head bolts 3 and 5. The earlier style conduits had the conduit tabs at head bolts 3 and 6. I believe both are now available. Below is a photo of my XK 140 which shows the red conduit and the earlier mounting bracket locations. 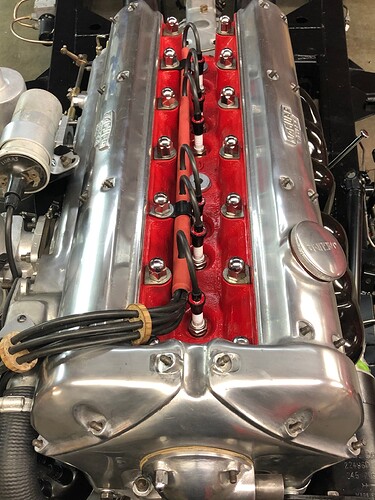 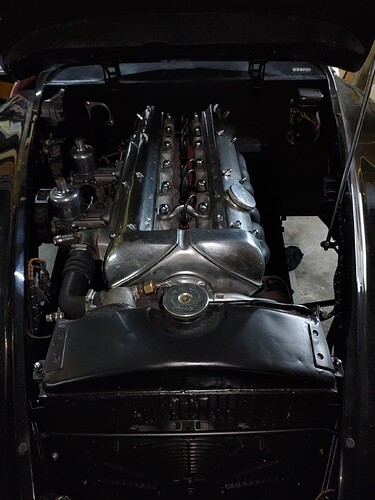 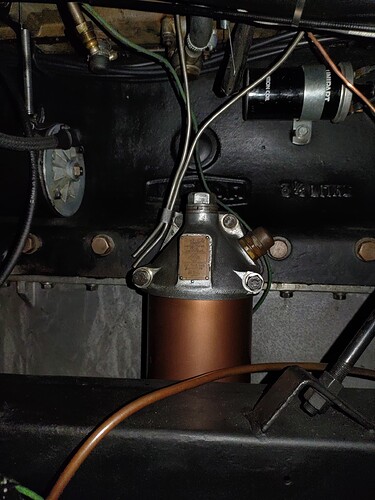 The routing of the ignition leads and the position of the coil mainly depends on how old you car is. The setup on my pictures is typical for a early steel body, May 1950 in this case.
Your cars engine also has no studs in the front part of the timing covers thus assuming an early model and most probably the same routing around the rear end of the engine.

My engine looks pretty close to Rob’s in appearance (as shown in your other post, Maddy). Your radiator looks to be in pretty good shape, the header tanks often get very dented over the years. Your air cleaners are obviously aftermarket, and the spark plug lead conduit is a home-made affair, by the looks of it. Someone has done what was a common period modification by putting a bracket between the front of the cam covers in an attempt to cure oil leakage which was a persistent problem with the early “studless” cam covers. The downside is that it was necessary to drill and tap a hole in the head itself, which can easily be welded up. You could even repair it with JB Weld, or similar, to make an almost invisible repair with a little bit of silver paint applied to it. The water temperature tube is routed down the wrong side of the engine bay, and the “JAGUAR” badge on the underside of the bonnet is not original - looks to be one from a hubcap. Oh, I’ve just noticed there appears to be no plumbing for the heater (on/off tap, hoses, etc) on the raised section behind the engine on the bulkhead (firewall), though I can see the holes.

Maddy, as long as you’re soliciting ideas for your Christmas list, here’s a few of mine:

Maddy,
You’re getting lots of good input but it would help to know if you are looking to make the car “generally XK120 correct” or “authentic” for its model, year and engine number. If “authentic”, then please include the original engine #. As noted, there were two basic ignition harness configurations which changed at engine #W. 6697.
Unfortunately, (as in this case) sometimes “authentic” can actually mean “less serviceable” and “authenticity” becomes less important.
Good luck.

Ha, ha, and that is exactly why my early car which was originally like Lukas’s has the later plug wire routing and coil mounting. I burned my arm on a hot manifold trying to change a block mounted coil one night in a McDonalds parking lot.
The change in wire routing was at engine W6697.

The clamp across the two “studless” cam covers before engine W4691 was very common before the advent of silicone gasket sealants. Remember Indian Head gasket glue, it’s about all there was in the '50s? I’ve seen the clamp on Mark VIIs as well before engine A6959, when they added 3 studs. The timing chain throws up a lot of oil there. On mine W3962 Permatex Gasket Maker has worked very well.

Guys,
I prefer authenticity but will also modify if Jaguar opted to improve performance or personal injury is prevalent. The latter is a change for today since most owners do their own servicing.

That said, I like the suggestions so far and am considering the options. My main goal is to get the car started and do any cosmetic upgrades while doing this task. There are a thousand more things that need to be done on the car yet and that will come later.

For those who monitor modifications based upon year and engine number here are those facts on my XK.

Most likely the gearbox is JL not KL, just a typo.

Rob I’ll have to recheck that. I have KL on my paper. Thanks for pointing out that discrepancy. Maddy