I’m trying to strip down my 70 motor myself and looking for some tips. I already have the head removed and am on to the cylinder head studs. Im trying to reduce the height of the motor before I pull it out from under the car.

!. What is the thread size on the studs?

2.Is the bottom thread right through the water jacket and the lower block?

I would concentrate on getting the car high enough to slide the motor out with the engine assembled. You are also gonna want it that way to get it back together anyway. Might as well do it now. If you can’t get the studs loose with a stud extractor let the machine shop have a go at it before you snap them off.

Having extracted and reinstalled the engine out the top and having dropped it down below I can recommend the latter as the easier and safer of the two. I don’t think you need to reduce the height, as already said.

There is one opening in the block that uses a threaded plug, never did get that out, it was frozen solid.

That would be for installing a block heater - standard fitment on Canadian delivery cars. My engine has the heater still in place, minus power cord as it’s never used. I tried to take it out when I did the engine rebuild. Not a chance in hell it’s ever coming out of there.

Quickly coming to that contusion!

How will you remove the block if you remove the studs? Commonly it’s suspended by a cherry picker or crane. Mine was hoisted using a chain lift/gantry crane, but you need something to attach to. I have heard of people using a motorcycle lift to lower it down and truck it out with the car lifted up. So it’s doable without studs but I’d determine that before removing them.

I wouldn’t bother trying to use nuts to extract them. Just go at it with a pipe wrench. Tape over the water ports and pistons if you’re worried about metal shavings. Some of them definitely go into the bottom of the block. I’m not sure how many or which ones. I have heard of people getting broken ones out but I have no clue by what magic it’s done. Maybe if the cylinder liners are removed they’re more accessible.

I would be trying to get penetrating oil on them if at all possible, and there are only two ways I can think of, around them at the top, hoping it drips down, or removing all the core plugs and trying to shoot them with an extension tube, again hoping it drips down. Alternatively you could just dump in a gallon or more of the stuff. You could reclaim some out the block drain.

One could always run a couple of slings under the block and use an engine hoist to lift the engine high enough to remove the engine mount brackets, then lower the engine and take it out from below.

Good question. I am still considering the options of leaving the studs in for engine removal or lowering the engine and trans straight down onto a dolly using hydraulic floor jacks for support or some sort of combination of floor jack and overhead lift which I have mounted to my garage roof. To be continued!!

Don’t use the bare studs if using for engine removal as you’ll likely bend them. Re attach the head first.

I’m pretty sure he’s replacing them anyway. Drew’s engine block came out that way and to be honest, it was nerve racking to watch, but nothing bad happened. Breakage would be the big fear if they are especially corroded.

I was thinking more in terms that if they were significantly bent, it could make the stud extraction even harder to accomplish. Didn’t think about breakage.

That would be for installing a block heater -

I got mine out and it actually works , it just needs a cord with the plug on it to be functioning

Right now I have a couple bottle jacks under the trans and engine I will use to hold the weight as I take out the trans and engine mounts. Additionally the engine will also be secured from a hoist. Once the mounts are removed I will remove the jacks and lower the drive-train the rest of the way onto a dolly. I may use a floor jack to assist the host. Its all still in the planning stage right now. Pray for me!!..and
Thanks for all the advise !

Once the plugs are out the bottom of the studs are right there. Mine were pretty corroded, 48 years of sitting in the water jacket seems to do that. I have seen video of them being drilled and taped out after being broken, so it can be done, but it looked like more work than I wanted to do. For mine taking it slow was all it took.

Hi - just in case you have a chance to remove the studs with the block on the bench, here is a procedure that I camme up with on my 1971 series 2. My studs were badly corroded, and I got them all out in about 30 minutes
Here is the
procedure that worked like a charm:

The nice thing about this procedure is that once you apply
the static torque, and the stud does not break, then you
know it will not break. If the stud has a significantly
reduced cross section, then you may have to decrease the
weight in the bucket.

The effect of the application of a static torque plus a
superimposed vibration load is very effective. It was like
magic. I would have sworn that at least some of these studs
would have broken off.

This is very interesting… I currently have my block on a dolly with the head removed. You can see all the studs which are still stuck in place in the attached picture. I’m assuming from your instructions this is the same condition as your block was in. Then, when set up as you described, and assuming the stud’s threads are just over 6 inches deep into the block, you heated the block just below the frost plugs for each stud. Is that correct? ( I didn’t think a map gas torch could get the block hot enough.) Also, was the pan removed from your block first or any of the frost plugs? And finally where did you come up with this seemingly brilliant scheme to get those bastards out!!! 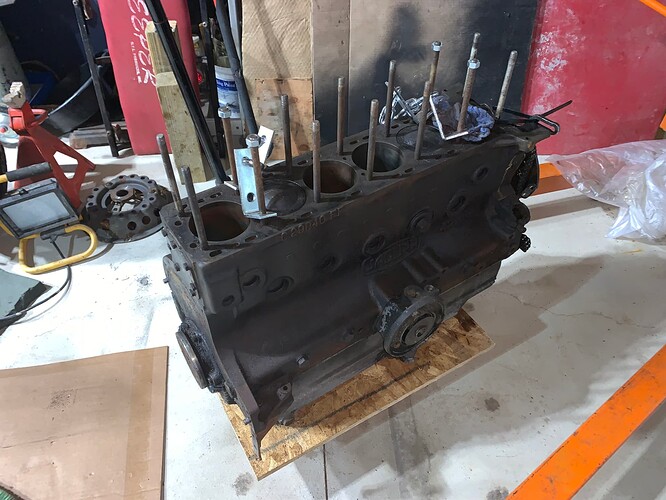 If you pull the plugs the base of the studs will be right there. Pulling the plugs will also let you check the condition of the studs below the deck. The only issue I had was with the screwed in plug intended for a block heater, never did get that one out. I even bought the correct socket, but it was a no go, although yours appears to be an outie, mine was an innie. I found there to be a bunch of crap in the bottom of the water jacket, so pulling the plugs let me clean it much more easily. If you don’t clean it out you will find a bunch of that stuff will fall into the stud holes. To be honest your studs are in much better shape then mine were, so if you are careful you should have good luck.

Well if it was a close up they are not as good as you think. It was tuff to get the head off. So did you pull the frost plugs first and heated the block at the base of the studs through the frost holes?