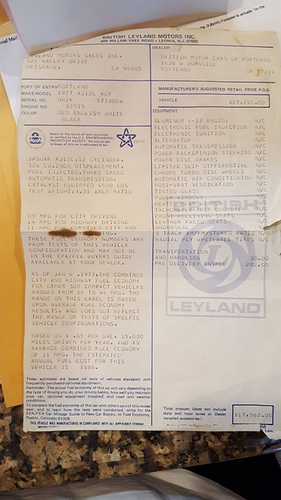 The way the U.S. Government determined fuel mileage was based upon calculations from data gathered while running the car on a stationary “running road” (dyno) on which they could simulate the load of a real road test loop.

The U.S. was already under the Federal 55mph speed limit at this time, so the highway mpg is based on 55mph.

So I’m wondering what those of you with XJ12’s with 3.31 gears actually get for gas mileage. Is the 9 city, 14 highway, 11 combined accurate?

It’s pretty accurate Thomas. I don’t have exact numbers. My 74 isn’t really in the group that you specified because it’s carburetted. I also swapped in a 2.88:1 rear diff.
The early efi engines with D-Jet injection had slightly better mileage numbers than the carb versions IIRC (but not by much). I did have a stock 76 XJ12L that was pretty much the same.
I never drive 55mph so they might get better if I could keep my foot off of the accelerator.

You and Sammy Hagar…

Ha ha. ‘Zactly! One should always run the machine at full chat.

When I was running my '74 XJ12L with carbs on the daily suburban commute of 13 miles each way, I would get about 12 miles per US gallon.

Wow, that Sammy Hagar video was cheesy - but he definitely tapped into popular hatred of the 55mph national speed limit. Even the highway patrol departments hated it because it sucked up all their manpower resources away from more effective public safety measures.

The spirit of Sammy Hagar’s driver anthem lives on in a big way in California: something close to 10,000 California drivers get tickets for driving 100mph or faster every year. When I lived there one of my friends got a 150mph ticket and trip to jail. One of my idiot customers got a 172mph ticket, he did it early morning on an L.A. area freeway - he was going faster, that was his minimum calculated speed based on the ground he covered while pulling away from the highway patrol before they shut the road down to stop him.

One of the reasons I wondered about real world mpg was that I remembered all the people complaining back then that the window sticker mpg’s were unrealistically high and unachievable.

One of the reasons I wondered about real world mpg was that I remembered all the people complaining back then that the window sticker mpg’s were unrealistically high and unachievable.

**
The carbed V12 were rather thirsty, Thomas - hence the move to the HE version, and EFI…

Fuel consumption is of course an expression of engine emissions - but test parameters will also influence results. In principle; on the road the engine must overcome rolling friction, air resistance and engine/drivetrain power consumption - and lots of energy is lost as engine heat. Would be interesting to see the sticker of another car make of similar weight…

At, say 55 mph, cars of similar weight will consume the same amount of petrol - with differences related to body shape and engine efficiency. However, the slower the engine turns the less power is ‘wasted’ in running the engine itself - the better mileage of modern cars is as much due to multiple gears as much improved engine technology and fuel management systems. Cruising at steady speed the same power is required to keep the car moving - some 50 - 60 hp gross for a 2 ton car.

Where speed restrictions are in force, the overall gearing is tuned to have the engine turning at the lowest rpms that will produce the necessary engine power for best economy - with something in hand to avoid constant downshifting at the drop of a hat…

That said; the V12, cruising at 55 mph should reach the 20 mpg - even in carbed non-HE form. So the 11 mpg quoted on the rolling road test refers to mixed driving with standardised parameters. And drivers complaining of not reaching that target simply follows a different pattern - which, given road and traffic variations is not strange. Or indeed, there foot is too heavy, a different gear ratio - or engine not properly tuned…

Frank, for sure technology has moved on since the '70’s: virtually every car has overdrive and variable this or that to maximize and minimize and all sorts of friction lowering technology.

I know you love the V12, but there is no way a '70’s XJ12 will ever get 20mpg - even converting it to Imperial gallons won’t get it to 20mpg. The fuel injected Series 2 lacked overdrive or any low friction drivetrain components and no cruise control.

Of course if you want to install 2.88 gears, an overdrive, cruise control, and carefully retune the fuel injection or possibly go HE - then maybe. Cylinder multiplication make fuel efficiency more difficult - even on small modern cars this can be seen between similar cars 4 cylinder vs. V6 with similar displacement.

So I’m wondering what those of you with XJ12’s with 3.31 gears actually get for gas mileage. Is the 9 city, 14 highway, 11 combined accurate?

Yes, that is accurate. I get about 12 with my Series II

MAAAYBE by high-mileing, but never on anything like normal driving.

MAAAYBE by high-mileing, but never on anything like normal driving.

**
That depends on what is meant by ‘normal driving’, Wiggles…:):

My point is just that cruising at steady speed gives an idea of how well adjusted the engine is. It really has no other purpose; variable traffic and driver actions may yield any number - useless for comparing engines…

I have a late Series 2 XJ12 from March 1979. I was getting something like 16 liters per 100 kilometers at 75mph. That would translate into 14.7mpg. And of course the European version would have a higher compression ratio. When I changed the rear axle to 2.88 I was getting 12,9 liters per 100 km (18.2mpg) on a trip from Hamburg to Ingolstadt at constant 75mph. Maybe the speedometer was not 100% accurate and there was a little tailwind. The car was 20 years younger. That was the best fuel economy I ever got. Today I’m struggling to even get near to that figure.

These are impressive numbers Andreas, it’s what my 86 HE does…
Maybe you had more than a little tailwind?

Maybe I did have more than a slight tailwind. I should also mention that I treated the engine with PTFE after the oil change (similar to slick 50). I’m sure that had an influence. Maybe I should repeat the procedure. I really think that a big portion of the improved fuel economy on the HE is the 2.88 final drive.

I really think that a big portion of the improved fuel economy on the HE is the 2.88 final drive.

Absolutely…
I personally love it.

I’m sure that had an influence.

When Slick 50 came out, I had a test mule engine on a dyno: I ran Slick 50 in it, and saw no significant improvements.

I don’t check fuel economy too often but 11-12 mpg city and 14-15 mpg highway is typical. It’s very possible to do worse if I drive the car the way it should be driven. A V12 Jaguar, after all, belongs at the head of the pack, never suffering the exhaust fumes of some snotty Bimmer or Audi. And the thought of carbon build-up in the combustion chambers is hateful to me. It’s abuse of fine machinery, and I was brought up better than that

It did better a few years ago. Something has changed but I’ve not been able to identify what.

It is possible to get 20+ mpg with the HE and 2.88 differential. I managed it with my XJS V12 because, sometimes, the conditions prevented me driving the car enjoyably. It means setting the cruise control at 60 mph and plodding along boringly, mile after mile.

A V12 Jaguar, after all, belongs at the head of the pack, never suffering the exhaust fumes of some snotty Bimmer or Audi.

And with those pearls of wisdom, I’m off to haul kids!

Dad used to get very high teens, sometime early twenties… in the H.E. I once depleted both tanks in 24 minutes back from Le Man one year! I think I hit 6 mpg tops…

Many years ago, my S1 XJ12 did 19mpg on a car club economy run, which did include a climb over a steep mountain (hill) range 400metres. Normal open road cruising speed, but careful acceleration etc. Friend with a 6.3 litre Lister XJS 5 speed got 29 mpg! My driving is usually economy minded and XJ12 on carbs usually returned 16-18 mpg open road. I never checked (or even used it much ) in town.When converted to 4.2, mileage was exactly 20mpg under the same conditions.