Gents,
I’m working on my ‘76 XJ12C which has peculiar indicated temperature. Indicates hot for a while, then back into normal, back into hot, back into normal, all in 5 mile highway or stop/go traffic. I have bled the air valve at least a dozen times now including when hot and the left front corner of the car quite a bit higher than the rest of the car.
I have several gauge temperature sending units and they all behave the same way.
I have run a jumper wire to the gauge from the sending unit with no behavior change.
I have used a variable resistor to mark various positions of the gauge needle with the changing ohms, and the engine running (13.1v). I’m now ready for a temperature/ohm chart for ‘76 V12 Jag? I looked in Kirby Palm book and didn’t see it (did I miss it?). I’ve searched this forum but found later XJS ohm chart (80s). Not sure if the same in the 70s.? I drew a chart showing what my gauge is indicating at various temperatures. I’ve also been using my infrared temperature sensor to take many measurements on the heads and of course the water rail where the temperature sensor is mounted. At about 190F, I’m reading 67 ohms from the sending unit and the gauge is pointing almost on the rectangle next to H. See attached photos. Any thoughts? 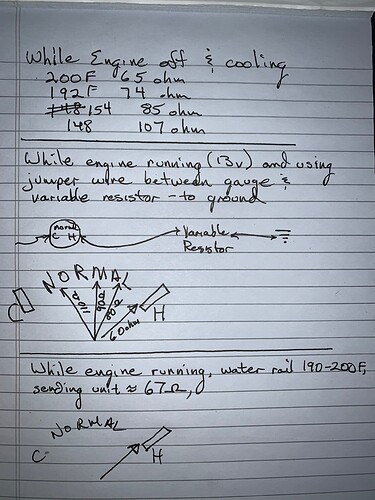 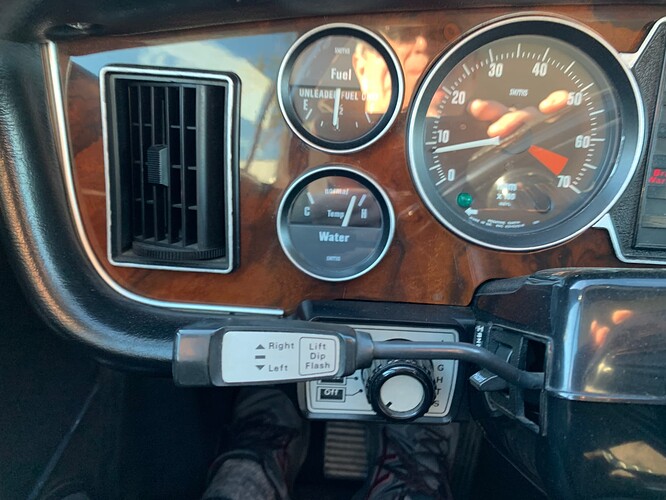 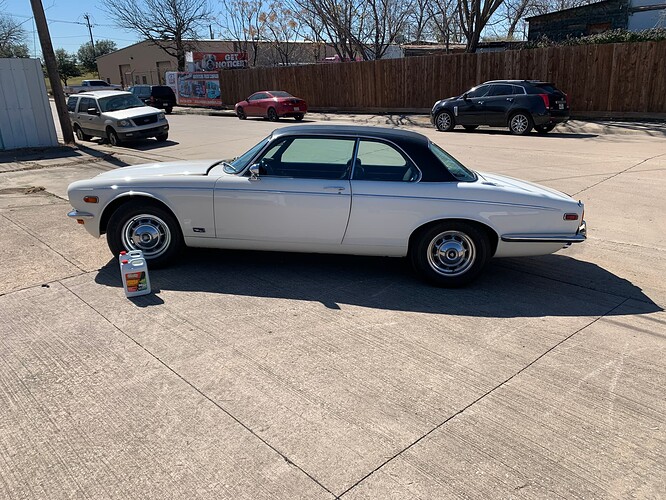 Thanks, yes, his website shows errors to me too. I sent him a pvt message.
I thought of another thing - I’m going to get my candy thermometer and a pan of heating water and measure the ohms as the water temp increases.

Have you changed the thermostats? Sounds like a faulty thermostat.

Oh yes, new thermostats, 190, trickle pin. Tested before installation. Tested old ones removed and they tested well too. Coolant flushed and new installed last year. Burped air to death. Have run the heat/defrost a bunch.
I don’t believe I’m overheating, especially using my infrared measuring tool so much.
This is why I need the chart. I’m starting to think I have a gauge problem, of which I only have one (no other to test).

Guys, something occurred to me in the middle of the night…. Of course……I measured the voltage at the sending unit with the engine running and it is 13 volts. Shouldn’t it be somewhat less with the voltage stabilizer? This would indicate why my gauge is reading too high. The fluctuation can be from the stabilizer going haywire?
What should the voltage be out of the stabilizer?

I was about to ask you for the stabilizer. Your temp reading looks like you don’t have one. It’s not a resistor, I believe. It “bleeds” voltage to ground resulting in more or less 10 Volt.

Do you have a heat gun to validate the high and low temp readings?

Update. The series 2 XJ voltage stabilizer “controls” the voltage to the fuel and water temperature gauges. It is located on the back of the voltage gauge as part of the clamp system holding the volts gauge to the dash panel.
The voltage stabilizer needs to be grounded to work properly. If not grounded, it will simply pass through the car’s battery voltage, thus the temperature and fuel gauges read too high.
As I got my fingers on the unit through the opening by the removed speedometer, it wiggled thus the little finger tighten nut used to hold the frame clamp snug wasn’t tight enough, so my voltage stabilizer was getting inconsistent ground, explaining my needle moving around more than it should.
I would still like to have somebody else’s temperature vs ohm output from their series 2 XJ V12 temperature sending unit. ???
I had a spare voltage stabilizer so on my workbench I rigged up a little test setup. A photo wouldn’t help because my alligator clip wires were so messy. I had a DC power supply, and I had it set to 13v output. I had my variable resistor set to start at 85 ohms and connected up the spare voltage stabilizer. My temperature gauge on the bench connected was indicating “m” of normal. At 62 ohms, it pointed to “a”. At 51 ohms it pointed to “l”.
See photo for chart.
I put the gauge back in the car and with the voltage stabilizer getting a good ground connection, I started the engine and put it at 1000 rpm. Voltage at the battery was 13.2v. I put an analog voltmeter on the power source wire at the gauge from the stabilizer and success, the needle was bouncing as it should from the stabilizer. (More on that in a moment)
I connected up the gauge and used my variable resistor instead of the temp sending unit.
At 51 ohms, it was just past the “l”. (A little warmer than bench testing)
At 62 ohms, it was in between the “a” and the “l”. (Again, just a little warmer indication than bench)
So I presume the difference is the voltage stabilizers reacting differently, but good enough.
With the car wiring all back as it should, I drove the car for about 15-20 minutes. When fully warmed, the needle was very constant just hotter than the “l” of normal. But didn’t hardly move. I assume my water temp at sensor is 190-210F with my 190 thermostats.
Back to the stabilizer - I took a photo of my spare with cover removed so you could see it. There are contacts that open and close as the bi-metal strip (with the green wire wrapped) heats and cools. Basically this thing is opening and closing the contacts rather quickly so voltage is varying between 0 and 13, but happening so quickly that our instruments see it as averaging 10 volts.
See my photo diagram. 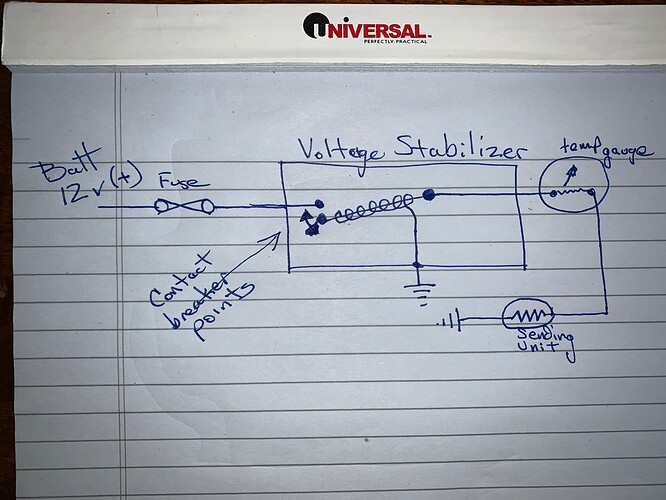 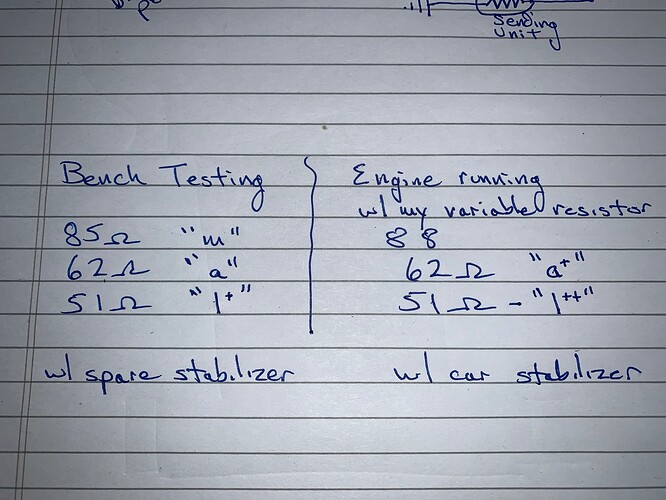 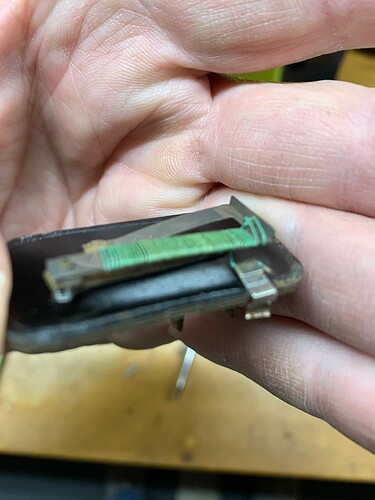 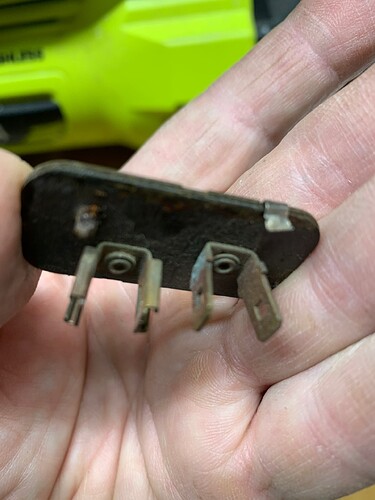 Replace the old bi-metalic strip regulator with a solid state device LM7810. It fits inside the can easily. 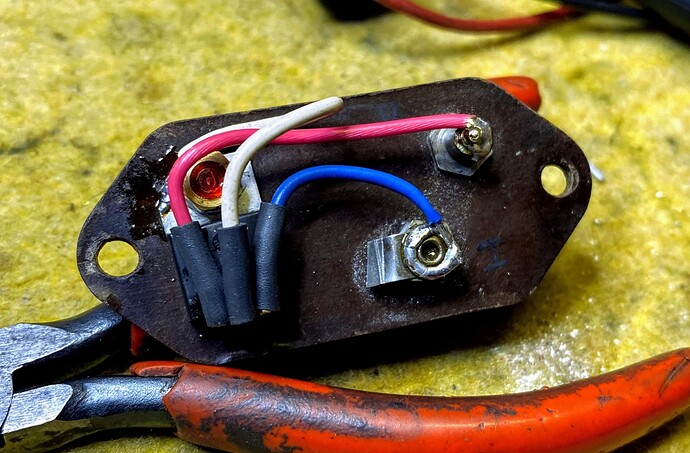 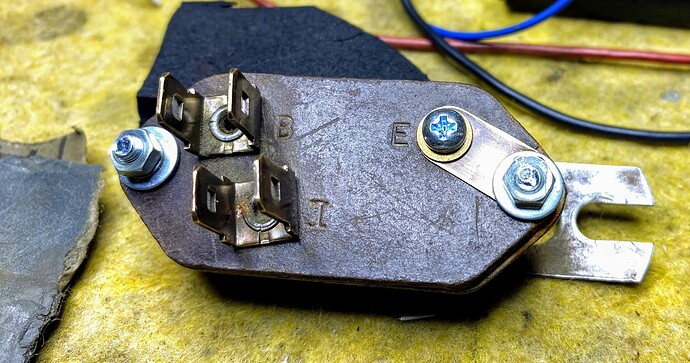 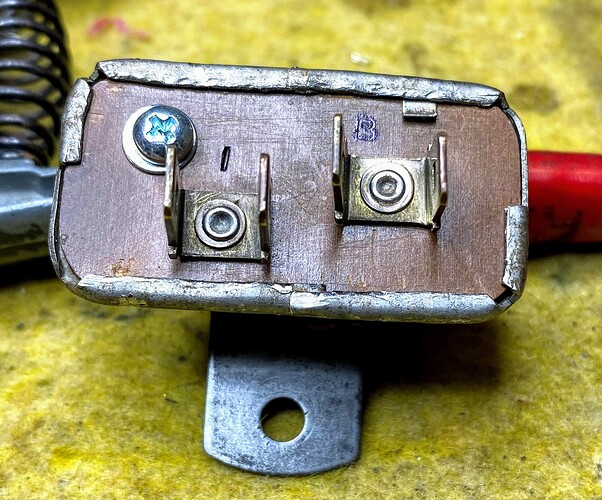 I have verified that my thermostats are EBC3577 from SNG Barrett, which are 190F or 88C.

Question - What is normal V12 coolant temperature in normal operating conditions, if the cooling system is operating in top notch ability? (Ambient temp was about 55F). I put my car back in storage so I don’t have it to tinker with, but I wish I had measured the ohm output of my coolant gauge temperature sending unit when I parked it in storage - as I wrote above, the temperature needle on the gauge was rock solid in its position, but indicating “high.” I found a chart on these forums where the newer sending units are in the 50’s ohms near 100C.

I have verified that my thermostats are EBC3577 from SNG Barrett, which are 190F or 88C.

I still wouldn’t trust it. I wouldn’t install a thermostat any more without confirming the measurement to the disc that closes off the bypass. Too many were found to be incorrect, even from reputable sources.

Ah ah, What you are discussing is the travel of the thermostat so the disc closes off the bypass completely. What are those measurements? I did some reading and it looks like these are usually supposed to move about 8mm starting from a height of about 34mm, as measured from the lip of the thermostat to the bottom of the disc. Any further thoughts or data?

More Info! In the August 2019 JAGUAR WORLD Q &A is a question about a XJS starting to run hotter, the car had a refreshed radiator and newer water pump. The owner was requesting help, they turned to Craig Talbot of Canada to reply. After timing and fuel he stated that 42mm stats were required to insure the bypass was completely blocked so all the flow would go to the radiator. He tried eight different brands and none except the Gates opened that far, 43mm for that brand, all the others stoped…

Thanks Kirby. Wow there has been a lot of discussion and work done on proper thermostats. I’ll go from there.

What is normal V12 coolant temperature in normal operating conditions, if the cooling system is operating in top notch ability?

With 88°C thermostats it should be 88°C, with a few rare exceptions such as very prolonged idle, or prolonged uphill on a very hot day with A/C On, and should never get higher than 93°C when the thermostat opens 100%.
Anything else is overheating, at least in theory.

With 88°C thermostats it should be 88°C, with a few rare exceptions such as very prolonged idle, or prolonged uphill on a very hot day with A/C On, and should never get higher than 93°C when the thermostat opens 100%.
Anything else is overheating, at least in theory

Interesting. These thermostats are made to operate in a pressurized environment (an automotive engine cooling system). If an 88C (190F) thermo is not fully open until 102C (215F), why is it not called a 102C (215F) thermo ? Is it a built in safety thing ? Does it matter ? SD Faircloth

Maybe I can answer my own question…after another hit of coffee. It begins to open at 88C (190F), at which point coolant begins to circulate thru the radiator. And if the cooling system isn’t keeping the coolant at 88C (190F) then the thermostat opens up more. SD