For 12 years I’ve owned this ‘76 12C but the car is rarely driven. I’ve been giving it some attention the last few weeks and it occurs to me it has slowly (over years) become more difficult to get running when cold. The engine cranks fine, fires a little and then quits. Next turn of the key fires a few more times than before, but won’t stay running. About the 4 or 5th try, the engine keeps running, but it is best described as, “slowly comes alive to a 700-800 rpm.’ The idle isn’t too rough, but not smooth either. The car starts quicker when fully warmed up.
The first items investigated on the list include the components which add enrichment and air needed when cold (cold, in Dallas, the air temperature in April/May is anywhere from 50F - 80F.)
AAV - I pulled the AAV thinking it was stuck closed. Nope, fully open. Tested while in hand in water and it fully closed rather easily.
Water Temperature Sensor - I removed the ECU connection clip in the trunk to test the harness wiring and the temperature sensor. At 68F, the ohms reported was 2.8K, fairly close to expected per chart. Certainly a close enough signal for the ECU to add fuel.
Fuel Pressure - I have a permanently mounted fuel pressure gauge which tees off one of the cold start injectors. Turning on the ignition, the pump runs for a few seconds, turns off waiting for cranking. The gauge reads 29-30 psi which is correct.
So what’s next? While the ECU connector is acceptable, I ran down the list of devices and various pins to check for correct signals. Everything reported properly.
I did vacuum simple test also the MAP Sensor to ensure it holds a vacuum and it does.
So now it is time to turn to ignition.

I pulled the 12 spark plugs and they all looked very similar - tarnish to dark brown. All gaps still at .035”. Not many miles on the plugs and the plug leads (wires). I cleaned up the plugs, chased the threads, a little anti seize, and put the plugs back in.

As I stood with a beer and gazed at the engine deep in thought. It occurs to me that this engine doesn’t “jump” to life like other engines. Makes me think I’ve had some kind of ignition retardation creep over the years. (As if the distributor isn’t tight to the engine)
Even when it started better a few years ago, it didn’t run at 1,100 rpm while the AAV was open and then calm down to 750 as it warmed up. Makes me think I have retarded timing.
So I pulled off the distributor cap to check the rotor and cap. A little corrosion but I sure have seen a lot worse. (Years ago I converted to the Lumenition system)
I tested the vacuum advance, and it wasn’t responding. No vacuum pull at all. So I’ll order a new one.
I’m thinking I have to pull the distributor to replace the vacuum advance, but stopped for a break. I removed the trigger board. It looks rather corroded or something on the downward facing side. See photo - anyone seen this before? Is it a problem?

Any chance of replacing the vacuum advance without pulling the distributor? I see about 1/8” of a split pin sticking up - holding it in place? 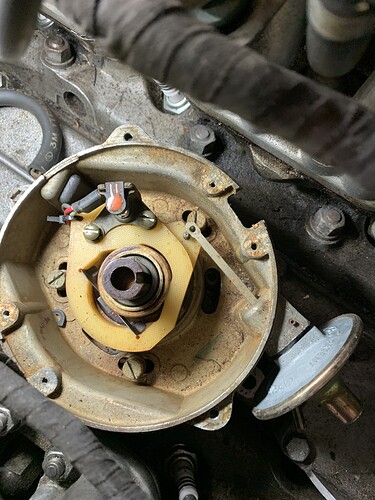 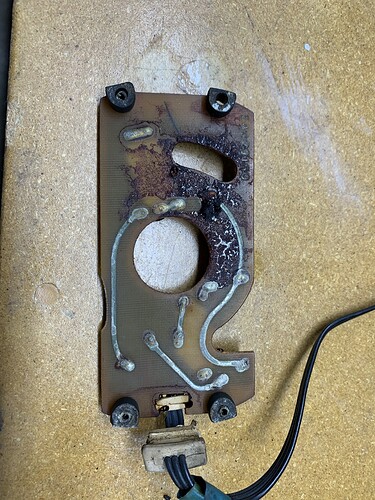 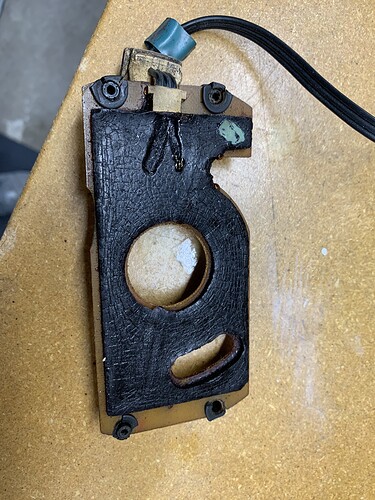 Any chance of replacing the vacuum advance without pulling the distributor? I see about 1/8” of a split pin sticking up - holding it in place?

If you can find a way to remove the split pin, yes you can do it without puling the distributor.
But it will be much easier to do it in the bench. Just make sure you mark the position of the rotor.

That does all look very tired. OPUS ignition was never very reliable to begin with, and then add many decades! Faced with a similar situation in my 76 XJ12C, I went for SNG Barratts REOPUS kit DAB113HEF which is basically a later Lucas CEI smushed into an OPUS case. It’s not cheap, but includes all new electronics, vac advance, rebuilt distributor, etc. No more trigger board. Very good product!

I ended up going this route after destroying the distributor body trying to remove the vac advance. On my car it had corroded into one solid mass.

Thank you for the replies so far.
Another theory question - How much advance does the vacuum advance really add when the vacuum port is just outside of the butterfly in the throttle body? The port is literally as close to the closed butterfly as it can be without overlapping the closed butterfly. This is obviously not part of my cold start trouble since the engine is started with the butterflies closed (foot off the accelerator pedal).

I don’t think the vacuum advance would be a start issue; have you checked coil? Easiest way is to pull a plug lead and plug in a known good spark plug, ground the shell of the plug and have an assistant crank/start the engine. Should have a regular blue spark at crank and running.

No, didn’t check coil. Good idea though, thanks. Car runs extremely strong when fully warm, just didn’t think it was spark related (coil). Worth the easy check though.

My experience on bikes is they show up on cold starting.

No, didn’t check coil. Good idea though, thanks.

My parents had a 1969 Volvo that would refuse to start on cold mornings. Ran great otherwise. Frustrated, they loaned me the car for a few weeks to see if I could work it out. One cold morning it stubbornly refused to start, so I pulled all the plugs and gapped them down to .025". It started right up and started easily every morning from then on. I concluded the coil was weak but the fix was easy.

Now that is interesting.
I’m going to pull the distributor, clean the weights, etc., and then install the hall trigger board upgrade just as a precaution against my old reed switch trigger board.

Update: I FINALLY received my new vacuum advance after weeks of waiting. It was the final part to install the ignition system back into the car. What I changed:
Rebuild & tested AAV with kit from John in Lithuania (old one still worked, but suspect)
Spark plug leads (plugs pulled, they were nice tannish and gap was .035" which is spec)
Distributor cap
Vacuum advance
D-Jet trigger board (switched from reed to hall technology)
O-ring on distributor shaft (not performance related, but needed)

Remember, I started this project because the engine didn’t “come to life” like it should when it is cold and then idle speed drop as engine warms up. I basically had one idle speed, cold or hot, and the throttle response when cold was not good.

One of the items I noticed incorrect was my throttle shaft bushing was gone on the driver’s side so my butterflies were not synched at all, which of course makes horrible low throttle cold engine operation. That has been rectified and butterflies are spot-on synched. So yesterday, when engine was first started and after just a few seconds, the engine revved easily and smoothly.

I wish I had checked the timing via the strobe light on the crank pulley prior to removing the distributor, but I did not. I have checked it now, and I’m about 10-12 btdc at tach indicated 800 rpm with vacuum advance disconnected. With engine fully warm after driving, I did not notice much throttle response difference or starting difference with distributor between 8 degrees and 15 degrees BTDC. I left it about 12 for now and did not hear any knocking/pinging under load.

Remember, I also have checked at the ECU, thus the harness tested too, all the components such as temperature sensors, MAP sensor, throttle pedestal position switches, etc. and all are within specification.

Throttle response now when cold and hot is excellent. Car goes like a scalded ape. (700r4 tranny with its more efficient torque converter and lower first gear is a lot of fun)

So why don’t I have an idle drop from cold to hot as engine warms up? The only item can be the AAV, right? When removed, the coolant was at the top of the head, so I know the bulb is in the coolant. I tested my new rebuilt unit and it closes as should per temperature spec.

As I write this, I think about the idle speed AAV control bolt. Maybe the idle speed bolt is so fully open the AAV’s sliding door air volume doesn’t change anything? I’m going to turn the idle speed nut in to close off and drop idle air volume down and see if the AAV then can do its job the next time it is cold.
What makes me think about this is the amount of “slop” in idle speed control on my 81 Porsche CSI fuel injection system - When engine is hot and the a/c is on, if the idle speed screw is in too far, I can have good idle speed, but putting in the clutch from high rpm as I come to a stop at an intersection can cause the engine to drop so quickly, it dies. But if I open the idle screw just a little, hardly enough to register an RPM change, the engine doesn’t die under the same circumstance.

I’ll play with the AAV idle speed screw and let you know what I learn.

My experience on bikes is they show up on cold starting.

so I pulled all the plugs and gapped them down to .025". It started right up and started easily every morning from then on. I concluded the coil was weak but the fix was easy.

My bike suffered for a very long time with hard cold starts.
New plug leads somewhat helped, and gapping the plugs down to .025" made cold starts better but made hot running worse.

Interesting enough, changing the starter brushes was temporarily fixing the problem…
It took me a while to find the connection between the two. It was all about voltage drop.

The +12V cables for the coils go from the battery to the fuse box under the seat, then all the way to the key switch at the front and then back again to the coils.
And the ground cables go all the way from the under the fuel tank to the kill switch on the steering handle in the front and back to the coils… Combined that’s about 4m of cable! They would almost never see pure 12V, and while cranking maybe half of that.
Connecting the coils directly to the battery via a relay cured the problem once and for all.

So why don’t I have an idle drop from cold to hot as engine warms up? The only item can be the AAV, right?

Maybe that means that the AAV works as intended?
What is your idle RPM?

OPUS ignition was never very reliable to begin with, and then add many decades!

A swiss expert also said it may have failed due to being over stressed with a couple of dirty connections on the BR9 ballast resistor. It’s now been rebuilt, the same transistors and autonotive capasitors are still available. Works perfectly again. YMMV.