87 SIII junkyard opportunity - what should I pick?

I got a great tip from a fellow forum member in Charlotte, NC about an 87 SIII XJ6 that has arrived at my local Raleigh LKQ junkyard. These are pick-your-own places where you pay a fee and can pull what you want and then check out for the final bill.

The 87 looks in decent condition and it saddens me to strip things, but I just don’t have the time, space or money at the moment to rescue the car intact. So… even though my '86 is very well sorted and needs little at the moment, I wanted to snatch as many items as I can to build up some reserves. I noticed from the yard pix that on arrival the hood leaper was present, but when placed in the yard, it was gone… of course

I have my list, but was wondering what the experts recommend I pull … mainly things that are or are becoming made of “unobtanium”. All thoughts welcome… 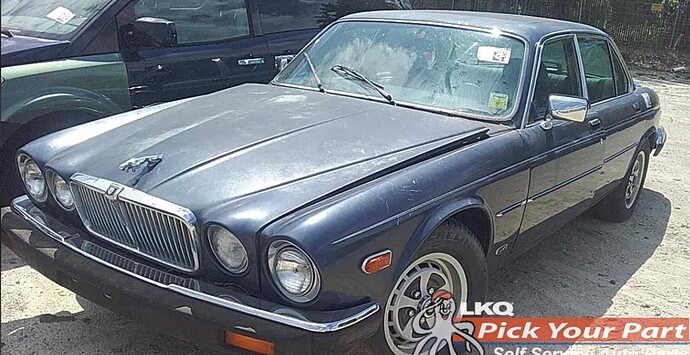 Everything wood in good condition, if possible the whole dash. The hazard switch if intact (careful), the sun visor clips, see if the rear view mirror holder (diecast part) stays intact when you rip the mirror down and backwards.
The lights in the b pillars if good.
The radio if it works and maybe the wiring loom in the engine bay.
Really depends on the time you have!

If you have an 85-earlier car this '87 (or an '86 as well) has some subtle features that you could upgrade your car with:

Also, an '87 dashboard won’t have an oxygen sensor light…so there’s no hole. This may or may not be of interest.

An '87 will have the upgraded AJ8700 radio…but look for the security code in the paperwork first !

The clear plastic plate with the PRND21 around the shifter is kinda hard to come by, not sure how hard it is to get off without breaking.

Randy,
I would suggest that you get the A/C amplifier inside the center dash but having removed a few of them myself (most of them bad anyway) you might want to bring a tent and flashlights for an overnight stay.

And gloves!
The wiper stalk switch and the switch clipped into the wiper motor if accessible (behind the battery) also like to fail.
And the leaper makes a good paperweight.

The wings, maybe the bonnet. The grill, Any chromework in good condition. The dashtop.

Goddamn it save the whole car!!!

Quick pix… I finally got to Jag and had a fun day pulling. Will display all and provide more pix and a few questions. Randy 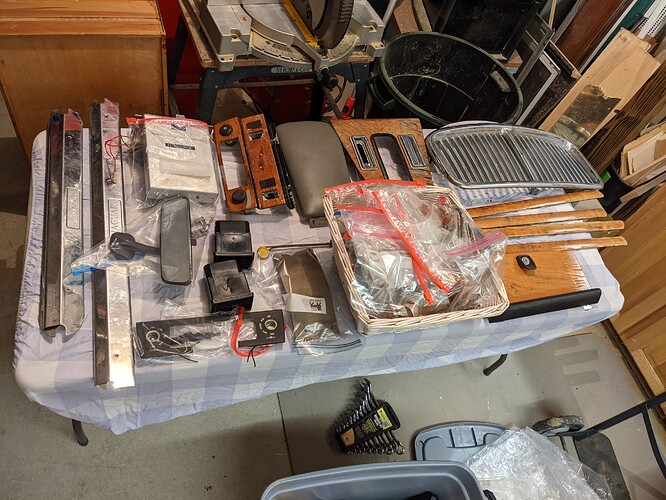 More pix of the haul… 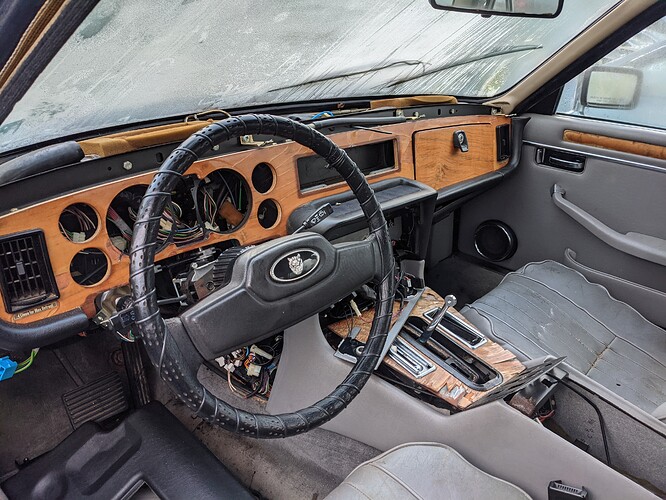 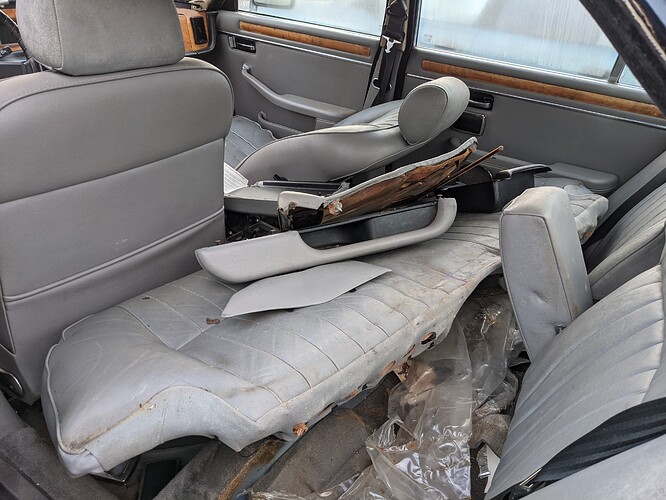 Unfortunately when I got there, someone grabbed lots of choice bits like gauges, A/C amp and servo, dash pad, radio, etc. But I think I got some good stuff

Great.
I see the glove box door, but not the rest: if you care for it, it’s all matching wood and not difficult to pull out. And the wiper stalk if you haven’t

Yes I did have a great day (expensive though!) and the Packers won too!

David, I have the door wood, center console, front radio/computer piece… they are in the pictures. I plan to get back as soon as I can to get the stalk and the front wood dash. I was unsure how to remove the dash, but watched a good video last night. As far as removing the two stalks on the steering column, any tips? I was not sure if the wheel had ot come off or if it was just several of the bolts I saw.

I had been there 5 hours and the rain was just starting to pick up again, so I left for another day. Hopefully other vultures do not come first.

How much did you pay?
We don’t have such places here. I paid $3 per headlamp in the us plus a non-tsa lock as they must look like bombs on the xray

That one video on YouTube is very good. If you want the glove box door you want the rest. I think the wheel must come off for the indicator stalk, but definitely not for the wiper stalk which has a sorry mechanism inside that fails often.
I wonder, are the seat belts any good?

Continuing my rambling on this topic. As far as cost, I paid $600 for the entire haul, which included some tax and mysterious “core” charges on a couple items. Also, to justify a little bit in my head, I counted 75 unique items I obtained, so the average is ONLY $8 per item. Reasonable for Jaguar parts - ha ha !

But mainly the price was a bit elevated because they charged “relay” prices for actual relays and anything that looked like a relay, for example, the handful of “bulb failure” modules. And they charge $5.75 per relay… so that added up.

Also, anything that looked like a “module” they charged engine management prices which annoyed me. But I was in line with 75 items they had to evaluate and add to the total… and there were about 10 folks behind me in line getting a bit annoyed. So I did not argue every item

Also, as far as everyone’s great suggestions in the posts, I just wanted to follow up because you might be thinking “Well, why didn’t he get what I told him to!?”

When I got to the car, these items were already pulled by someone who either had a project or they knew the value for re-sale:

As far as other suggestions:

That must be a fairly new scam at junkyards: Colorado Auto Parts is a place that I go to fairly frequently and it doesn’t matter what you buy, it includes a 2 dollar core charge. I just wish they’d be honest and charge two dollars more for the part and quit calling it a core charge!

Fair enough, please know that the hazard switch is the worst design I can imagine and is very brittle; the lever is off axis. Do not put any force on it, ideally don’t touch it. I think it is best removed by:
Three screws below the plastic monstrosity under the steering wheel
Two bolts below the steering wheel column so the steering wheel drops down
Then you can carefully remove the cover and the switch becomes accessible.

I don’t see any use for the seat adjusters, they never go bad, wouldn’t bother unless they’re better than what you have -

Similar to this S1 motor (the motor is different but the location is the same), and on the side of said motor is a switch (opposite of the plastic cover, clipped in and will slide out upwards iirc) that tends to go bad.

If yours have rust have a go for the panels below the fuel tanks. Small and relatively easy to pull. The Kents do look good and I don’t care for the bumpers in the least, maybe the chrome but only if it’s really good and you’re not going to sit on it.