Yes I will put this in classifieds but figured this group might want a heads up. I am about to pull the XJS into the garage for the last time with the TH400, which will come out to make way for a 5 spd. Point being, if you are interested in a TH 400 with 62,000 miles, B&M in shift kit, a B&M deep pan that has been ground to clear the factory trans mount, PM me and let’s talk. The trans functions flawlessly.
Bob 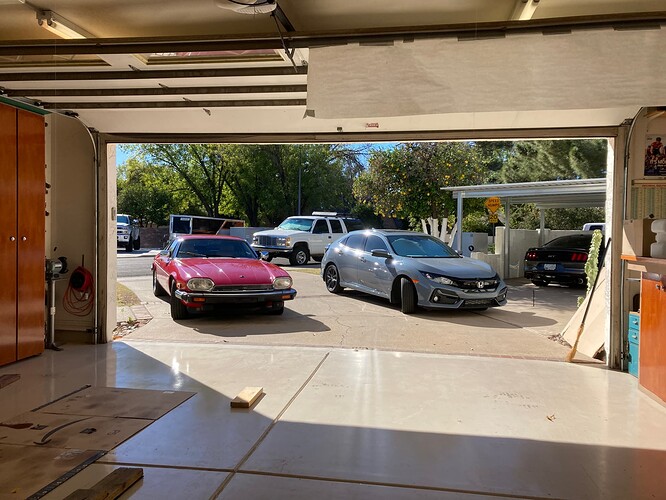 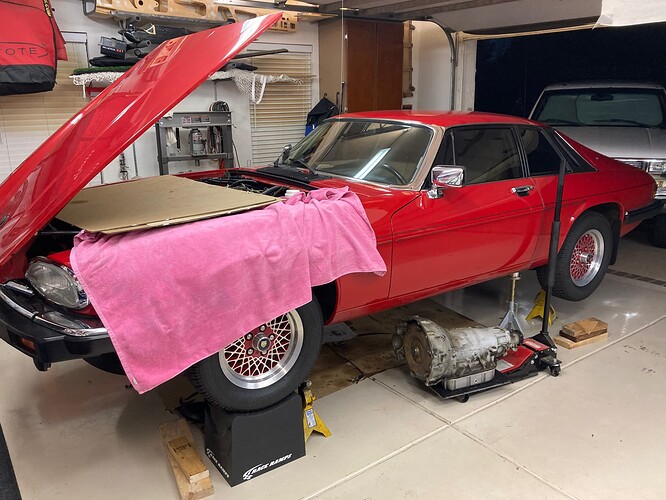 That’s awesome Bob, you’re taking the plunge. I guess the shift kit didn’t do it for you anymore more were you always planning on a 5 speed conversion?
What sort of gearbox and gear ratio are you planning on using , if you don’t mind me asking?
That should wake up and put some life into a short stroke V-12 !
Good luck with your project let us know how it goes.

Hi Gary-
The 5 speed has been the plan for many years. Motivation and life kept putting it off. In the past couple of years I’ve put in a manual pedal box and a diff with 3:54 gears. Been driving the car like that (not so much on the freeway with those gears

). I have a Bywater “Super Enhanced” ECU which has the fuel cutoff disabled ready to go in. The trans will be a WC T5. Bell housing I got from Medtronic quite awhile back. Fidenza flywheel, Ram clutch and hydraulic TO bearing. I need to take some measurements in the next couple of days to confirm input shaft length and shifter location. Then I can order the trans which I am sure will take a few weeks. In the meantime. I will rework the console, rewire the stereo and do some electrical mods, get the clutch and flywheel set up, indicate the bell housing to confirm alignment, fab a pilot bearing, and replace a leaky pinion seal, among about a dozen other things! And my Wizard rad should be here today. Not sure if that is “in scope” for this phase. Fortunately we’ll have nice Az weather for the next few months.
Bob

Sounds great Bob, hey just thinking out loud here, might be a good time to look at and even replace that awkward 2 piece rope seal at the back of the V-12 whilst you have the flywheel off.

Wow, removing the TH400 on jackstands. Curious, did you do it yourself? Was that floor jack stable enough to keep transmission from rolling off?

Good luck with the 5 speed, bet it will be a blast to drive!

Hi Greg-
The front wheels are on race ramps. The rear jack stands have machined tops which fit over the spigots in front of the rear trailing arms. It’s a very stable setup. (The yellow jack stands are just hanging around) Yes I did it (mostly) myself. Look closely, the floor jack has a large flat 1/4" steel plate which is welded to the pivot and carpeted. It rotates left and right but stays level. It is extremely stable when put under the big flat trans pan. Full disclosure: The cardboard is so my lovely wife Rene’ can lay on top of the engine and guide the socket onto the top two bell housing bolts. You can’t see them from underneath and you can’t get them from above without taking a bunch of stuff (heater valve, balance tube, etc. off) There are 10 total, I got the first 8 by myself, then called for reinforcements (Rene’) for the last two. All of the bolts need to come all the way out, as there are a couple (at the starter) that also capture cable clamps under the bolt heads. For the final phase Rene’ ran the jack as we went up and down a couple times to clear hang ups (aforementioned cable clamps, and the filler tube.) I work pretty slow, this stuff is supposed to be fun, and I bag and tag and photograph so when I go to reassemble in 2-3 months I won’t be totally lost. At my pace it took about 6 hours start to finish.

OK Bob, good answer, but while you’re there are you looking at that rope seal?

Undecided. There are no major leaks happening. I am debating whether to leave well enough alone. Will know more once I get the flex plate off and get a good inspection.

Sounds like a plan Bob, but dumb question are they known to fail after so many years? (I’m no expert) but that would be a PITA if you were in there staring at you in the face and started to leak once everything was buttoned up?

Rope seal cannot be changed without dropping the oil pan and sandwich plate, which requires dropping the front suspension. Then you have to remove the rear main bearing cap/seal retainer. Not a simple job. Jaguar also specifies a rope seal sizing tool. Biggest cause for leaks is overpressure from a blocked crankcase vent oil separator gauze under the pig snout.

You’ve been driving that car around with a clutch pedal box and a 3.54 diff while still using the TH400 transmission?
Curious as to what was wrong with the highway miles with the 3.54?
I haven’t noticed any drawbacks that made me ever wonder about highway driving with either my XJ81 or 4.0, both have the 3.54

Yeah, it sounds like the 3 speed transmission is the problem. That manual gearbox should put you right.

are you looking at that rope seal?

Undecided. There are no major leaks happening. I am debating whether to leave well enough alone.

Leave well enough alone. I dunno why people grouse about that rope seal, since it almost never has a problem. You might just remove that rear bearing cap, apply a bead of Loctite 518 on the top, and reseal the sides with new RTV.

I only ask as a friend of mines grandad parked an XJ-S 10 years ago , same year as mine because the rope seal was leaking. Otherwise the car is spotless. Just wondering if I should take it off his hands?

Yes! Rope seals are actually quite dependable. They aren’t 100% as good as a modern seal, but they can be close to leak free. Replacing one with another rope seal won’t accomplish much. If a rope seal is leaking, you need to fix any pcv breathing issues, and change oil frequently.

When i bought my 88 a few years ago, it had sat for 7+ years, and oil looked old. There was a leak from rear main seal.

I cleaned/replaced pcv system, changed oil every few months for a year running dyno oil/marvel mystery oil, then switched to synthetic oil. My rear main seal does not leak three years later, as far as i can see. 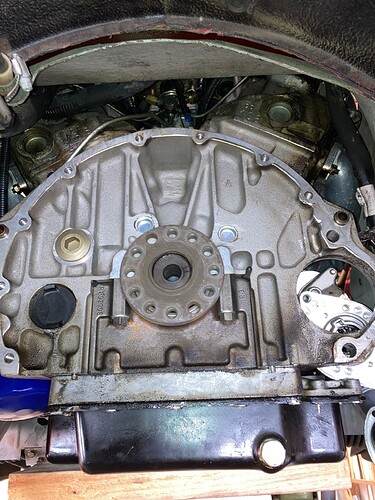 image1920×2560 677 KB
Rear main looks really good, actually fantastic. The very slight sheen of oil underneath it is really hard to see without the flash on the camera. And I can’t wipe it off with my fingers…

I cleaned nothing before taking this picture, this is what I saw when I pulled the flex plate off.

The usual suspects, the cam cover half moon seals not so good. Need to add a set of John John’s half moons to my project list.

Side note: The radiator fairy showed up while I was under the car. This is a project for a later day, possibly while I wait for the transmission. However, I 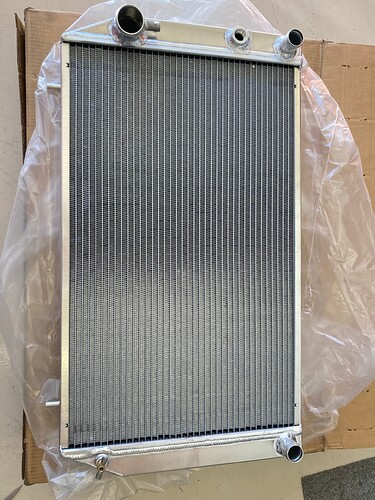 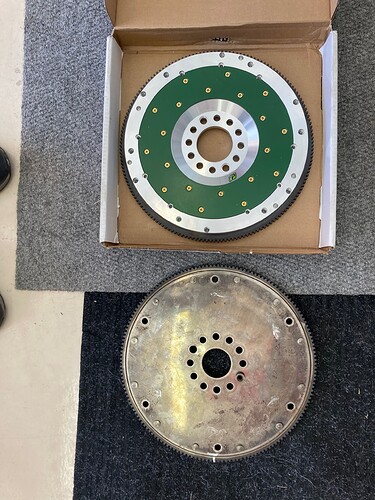