Hi all, I have been troubleshooting my ‘92 U.S. spec. XJS ABS system with a blue top pressure switch. Mr. Kirby’s book references an inverter relay (for N.C. To N.O. Amber light signal) in the car that is green on a red base. Should I have one? Looked under both sides of dash and did not find it. Also, is there a new source of the pressure switches that won’t break the bank? The Jag. black top and the blue top and A.C. Delco part now seem obsolete and dear? Thanks!

I too have a 92 XJS with no brakes, and maybe that is my problem too. I changedout the pressure retention ‘ball’, pumped the brake pedal 20 times, and it did not help any at all. Now it seems that maybe the relay that supplies current is either bad or corroded in the connection. A picture would sure help on this one, and I can understand why maybe your color coded one got replaced at some point. Any and all help appreciated.

I too have a 92 XJS with no brakes

Ronald, as I understand it, your pedal goes to the floor. If your problem had anything to do with the ABS pump, it wouldn’t do that; if your pump had failed entirely, you’d have a hard pedal and you’d have front brakes, you’d just have to push really hard to stop the car.

If your pedal goes to the floor, the front brake circuit won’t hold pressure. That could be because there’s a leak or blown hose somewhere, but that’s usually obvious by a puddle of fluid on the garage floor. If your front brake circuit won’t hold pressure and there are no puddles, there are only a couple of things it could be. By far the most likely is an ABS release valve that is stuck open. There are reports of people who have R&R’d these things, sometimes getting replacement valves from Jaguar saloons or even non-Jaguar cars that share the Teves III ABS.

One other possibility, far less likely, is a bad seal in the master cylinder.

Note that, on any intelligently-designed braking system, if the front brake circuit wouldn’t hold pressure, you’d still have rear brakes. That’s why I recommend the Teves III be s#$tcanned and replaced with either the Teves IV or the pre-ABS vacuum-boosted power brake system.

I forgot to tell you that the pressure specs. for the switches in the GM combination pressure switch are identical to the specs for those switches in the Blue Top Combo Switch - I looked them up a while back. I have NO Idea what the specs are for the “green on a red base” are - I would be very wary of that.

Absolutely agree with the retrofit of a good, old fashioned vacuum booster and plug off that extra line. Master cylinder is dry, as is the floor of the garage. One person suggested that I try to bleed the brakes before doing anything else. I want to drive the car, and decide if I want to keep it. It is low miles, and needs a respray. Oh, you mentioned the a pressure switch, and it would help to know where to find it on the car. 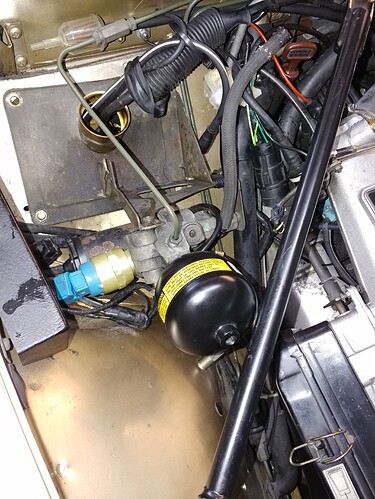 Thanks all. I’ll stop looking for the reverse relay because I don’t have one haha. On my car, I have brakes as the pump runs. I have the amber ABS light on, so that’s why I am troubleshooting. Unfortunately, I have it all but narrowed down to a bad computer. My last checks were the pressure switch, level switches and relays. Any chance a vintage Pontiac or Buick computer will bolt right in? I agree that this Teves 2 may have left something to be desired. Right now I am trying to ‘dance’ with the one that brought ya.

Thanks. Do I unplug it, or find another?

As the esteemed Kirby has said earlier, this pressure switch has absolute[y NOTHING to do with your particular problem.

Go to Ebay and search for this: “Jaguar XJS ABS” - you will find lots of stuff!

OK, then where do I start? I looked on Ebay and found a rebuilt gizmo with master cylinder for $1895! No way is this going to happen with a 500 dollar car, And a rebuilt to boot?

If you want to contact me off list I may be able to help with somme used parts. I have a few ABS equipped XJ-S parts cars.

OK, more specifically, go to: Ebaymotors.com
In the search bar at the top of the page, type in: “jaguar xjs ABS” - there will be pages of stuff.