It has been a bit of a struggle to start this car when cold. The temperature sensor is fine and the crankshaft position sensor has been changed. The spark plugs do not have much mileage on them and the wires are new. The cap and rotor are fine also.

Once the car starts it runs fine with no problems. Does anyone have any advice?

When you say it’s a bit of a struggle to start the car when it’s cold what exactly do you mean?

Does it not start at all ?

Is it just hard to start (a lot of cranking)?

Does it start but doesn’t run properly for a while?

The cranking time is significantly long. It might crank endlessly, and then I turn the key back off and it tries to start, then it starts as I’m backing off the key, or I just try again and it starts. Once it fires over it runs exactly as it should, regardless of out door temperature.

Since you said: “Once it fires over it runs exactly as it should, regardless of out door temperature”, that narrows it down to the starting sequence.

“The cap and rotor are fine” … What, did you ask them how they were feeling

CHANGE THEM ANYWAY. (caps and rotors are notorious liars) … seriously, try this first before you go one step further !

I changed the cap and rotor about 15k miles ago. I still have the old ones which were fine at the time also. Maybe I’ll change them back.

I believe there should be a CRANK signal to the ECU that originates at the starter solenoid to provide cold start enrichment. I know this was true on the earlier ('88-89) XJ40. I repaired one years ago by replacing the starter that was not energizing that terminal. The owner told me that prior to the repair, he would install a new battery EVERY year as the weather turned cold and always carried jumper cables.

Can you try cycling the ignition key to the ‘On’ position then off a couple of times (3 or 4) and then try to start it. May just be a failing NRV in the fuel lines.

I’ve tried the key cycling idea with no effect. Thanks though.

Hi Darren, I think if it’s more an issue of how long the cars been standing rather than actual temperature that brings on the need for all the extra cranking it’s more likely to be a failed NRV. I’m only assuming that because you said ‘once it starts it runs without problems’. Does the amount of cranking required vary or increase in relation to how long the car has stood ? Have you tried to restart it say half an hour after a run ?

I finally received a replacement distributor cap and rotor. I changed them and the problem remains. I’ve also changed the oil as suggested to 20W 50. This had no effect on anything. I see people referring to a failing or failed NRV. I’m not sure what that is but I will do some research.

I see people referring to a failing or failed NRV. I’m not sure what that is but I will do some research.

NRV = non-return valve. This one-way valve holds the fuel in the line from the pump/fuel tank to the fuel rail on the engine thus ensuring there is enough fuel to facilitate a cold start. 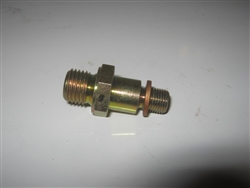 I appropriated this picture from everydayxj.com, which has the NRV for sale:
Jaguar XJ6 XJ40 Fuel Non Return Valve JLM1854

Your '93 model has an in-tank fuel pump that sits in a cannister that incorporates an NRV. Earlier models that had an external fuel pump used a separate NRV like the one shown here. Some listers with the in-tank fuel pump have added this type of NRV to compensate for a failing/failed one.

Thanks so much for the information. If I order the pictured valve, is there a way to install it into the return line without too much modification?

This is the NRV that I fitted to my XJ40 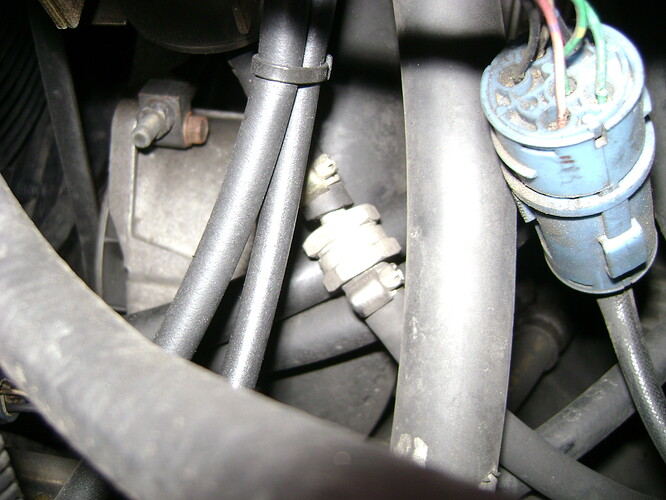 Thanks! That looks incredibly easy! I’ll check the full pressure regulator for leaks first and then if it is fine I’ll order the NRV.

is there a way to install it into the return line

Darren - check the archives for more info before you go the NRV route. You don’t want to install a NON-return valve in the RETURN line. It needs to be fitted in the supply line.

I fitted mine into the return line as you can see and it worked fine.

Thanks Robin, I stand corrected. I am confused as to how this works then.

I am confused as to how this works then.

Me too (not the MEtoo movement BTW)

Thanks Robin, I stand corrected. I am confused as to how this works then.

I thought that the fuel system operated on a continuous flow basis from the fuel pump through a NRV at the pump outlet in the feed line (to prevent fuel draining back to the tank via the feed line) to the fuel rail, at the end of which is the fuel pressure regulator (FPR) which maintains about 40 psi in the fuel rail and allows anything above that pressure to return to the tank via the return line. Surely a NRV in the return line would prevent that?
The usual problem is that the FPR fails at a much lower pressure and allows fuel to drain from the rail via the return line on engine shut-down OR the NRV in the pump outlet fails and allows the fuel in the rail to drain back to the tank via the feed line on engine shut-down so that there is insufficient ‘hold pressure’ in the fuel rail even after the initial ‘priming burst’ from the pump (when you first turn on the ignition) to allow the engine to start.

In either case, that problem can usually be overcome by employing the ‘key cycling’ trick - i.e switching the ignition ON_OFF_ON half a dozen times before engaging the starter to take advantage of multiple ‘priming bursts’ to get the fuel pressure in the rail up to the required 40 psi to allow the engine to fire.

Since in an earlier post Darren says he has tried that trick with no success, I suggest that the problem lies somewhere else.