I am going to drop a 6.0 from a 99 gmc 2500 and I will use a 4l80e. I’ve been playing with the PCM, I’ve successfully pulled the bin file from it and have been able to make the changes to get it into the car.

I’ve started this thread because I haven’t crossed any success stories on the later xj40s. I also would like to have it for questions I will have for you all. It will be a slow process but I will post pictures as I go. The car is currently still on the road and I drive it daily. 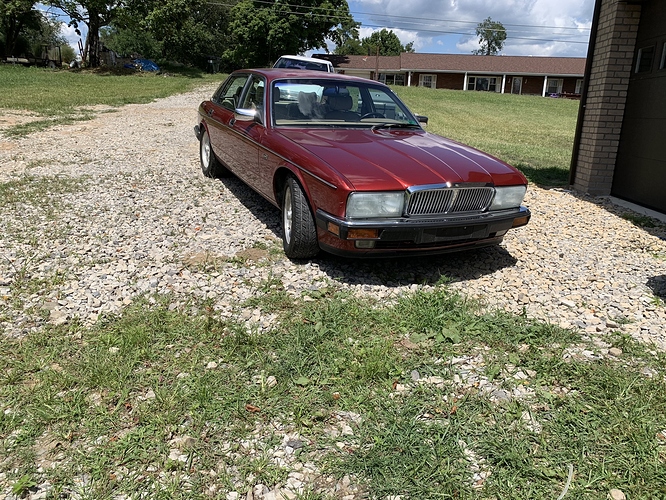 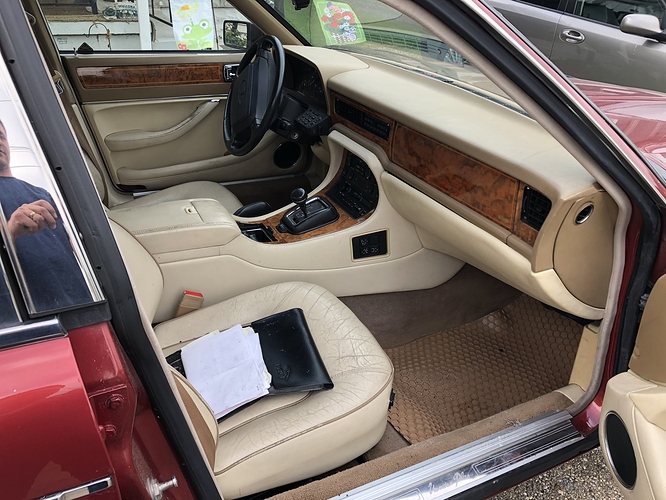 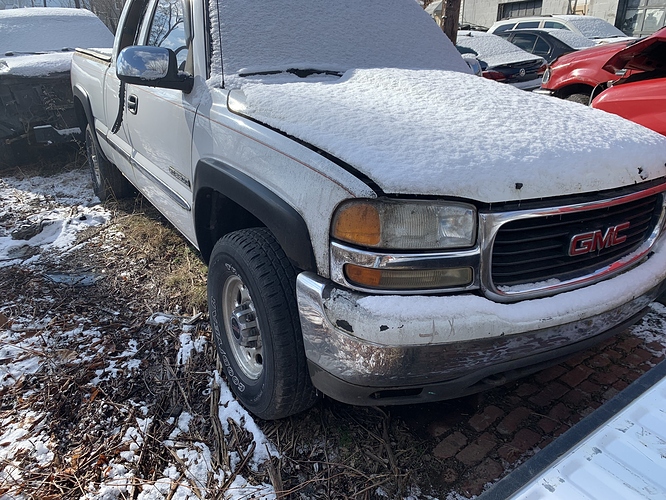 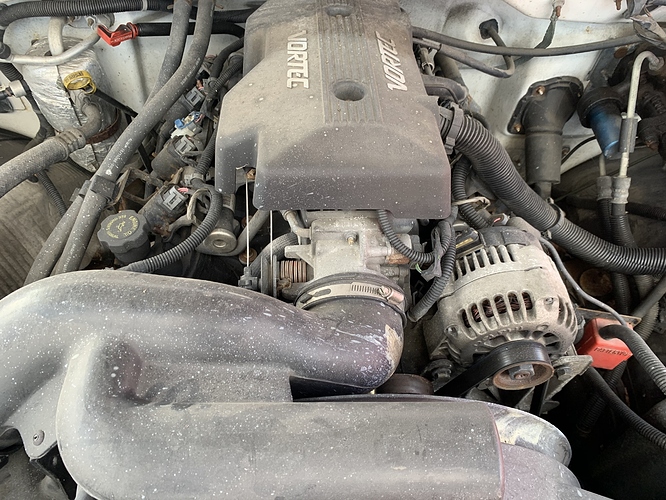 I contacted Andrew. He seems like a very nice guy and was willing to help. He quoted me on a full kit to make the change. I can mig/tig and have a friend with a machine shop. So fabrication is no problem for me. I will need Andrew for any type of VATS if my car even has it, and whatever is needed to use the A/C and cruise control. I don’t think I’ll need the full kit.

But, why make two cars in to one.

Seems like an ideal stable. Work truck and Sunday car…

You have a very good point. I purchased the truck without the title, but I could acquire it if I wanted to. I only paid $275 for it towed to my house. After getting it home and really went over it I discovered it was a complete gonner. I’ve already sold the truck minus drivetrain and wheels. I already have a 3/4 ton truck that’s in really good condition that I can use tow and haul with.

It appeared clean at first glance. 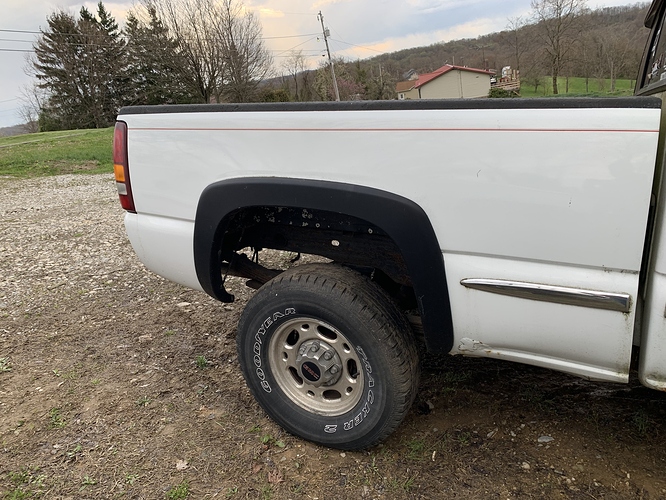 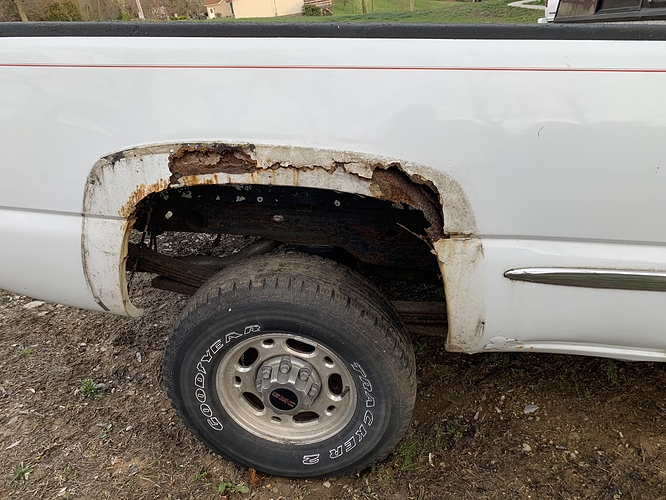 How can I tell what ratio gears the differential has?

counting teeth will give you the exact answer
don’t know if your talking about the Jaguar.
I think the series III’s have a 2.88
not sure about the '40
maybe ask on the XJ 40 portion of the site.
a ruff estimate could be had if you jack up one wheel - use a jack stand
then spin the drive shaft while the trans is in neutral and the hand brake off.
Count the full & partial revolutions the drive shaft makes to spin the tire around one revolution

Tony, I found these posting under the XJ40 site
scroll down to JaguarPete’s second posting
'with a name like that he must know what he’s talking about!
copy and paste this into your ‘address bar’ - I think that’s the proper name

I was wondering what kind of rear end the XJ40’s have? Is it the same Dana 44 setup as the XJ6’s had up to 1987? Any other info? Thanks, -Dave– 1985 XJ6 LS1 turbo project Pittsburgh, PA, United States –Posted using Jag-lovers JagFORUM [forums.jag-lovers.org]– Visit the Jag Lovers homepage at http://www.jag-lovers.org for exciting services and resources including Photo Albums, Event Diary / Calendar, On Line Books and more !

Thank you for the reply! I was asking about the Jag, I was hoping there was a rag or code somewhere that would let me know. I can jack it up and count the revolutions though that’s no big deal.

Wow 2.88s, no wonder these cars can run well past 100 no problem. I’ll dig some more on the forums and see if I can find any info.

I came across the turbo jag build in Pittsburgh recently. That’s only about 1 hour from me too. I need to study that some more as well.

Tony, I’ve got a series II I haven’t touched in Years but bought a series III for those 2.88’s. Their front suspensions have better brakes and a quicker steering ratio? I bought a larger diameter front sway bar from Andrew.
Then I got a couple of series I’s for a Deal and bagged the steering wheel, speedo/tach and some trim for the trunk. Somewhere I got a hold of a set of starfish wheels - 'love them.
At one time I had 5 Jaguars on the property - the place looked like a chop shop

The yellow one is the keeper, a '75 (big plus in California as no smog tests are required)
The blue one is a '76 for parts - these are to 2 I have now.

I found some Van Den Plaus (spelling) rear seats (more like bucket seats than bench) and the door panels I can mix and match. Then the electric seats out of an XJ40.
Typing all this has got me excited, I might have to start working on the damm thing.

thanks for starting this thread. 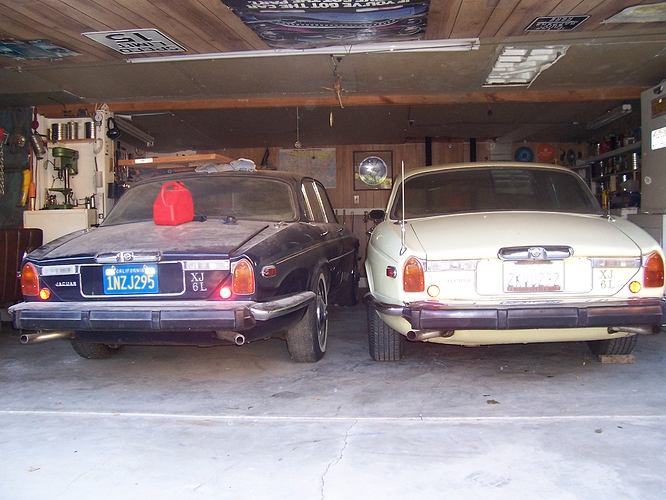 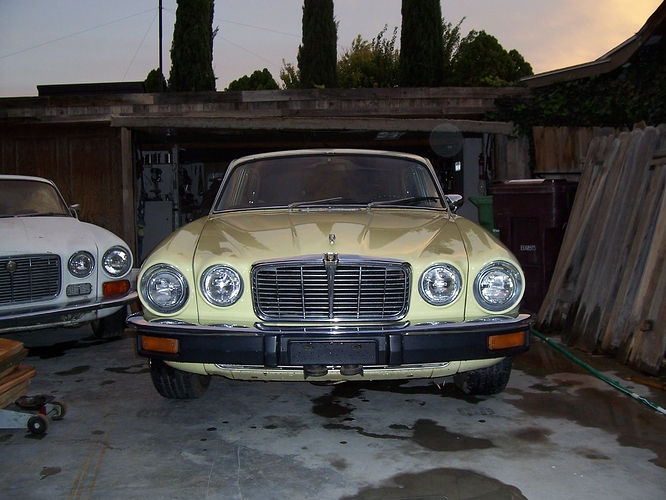 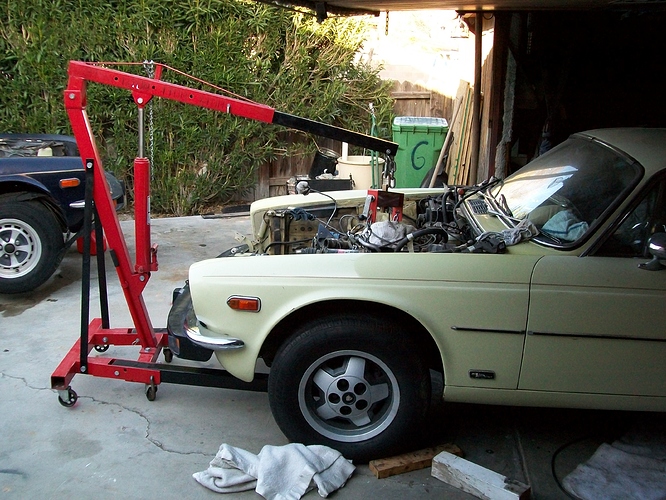 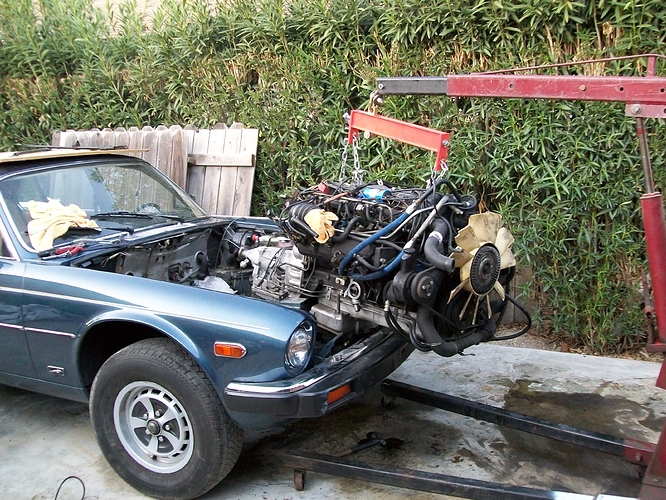 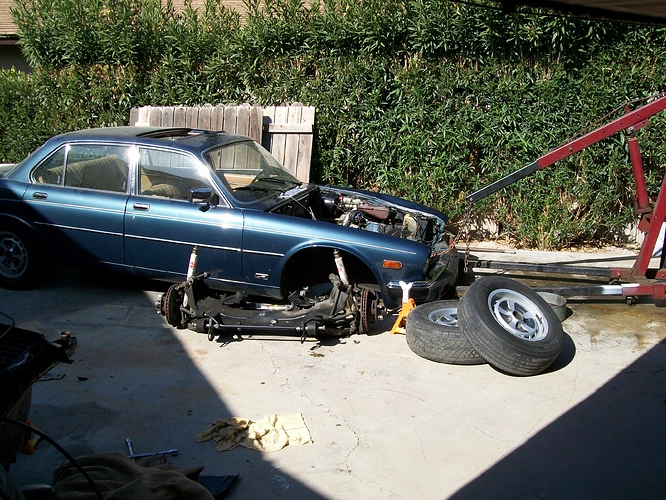 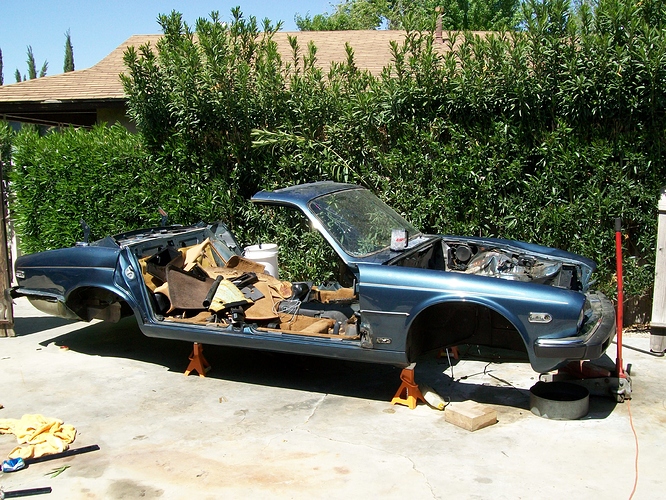 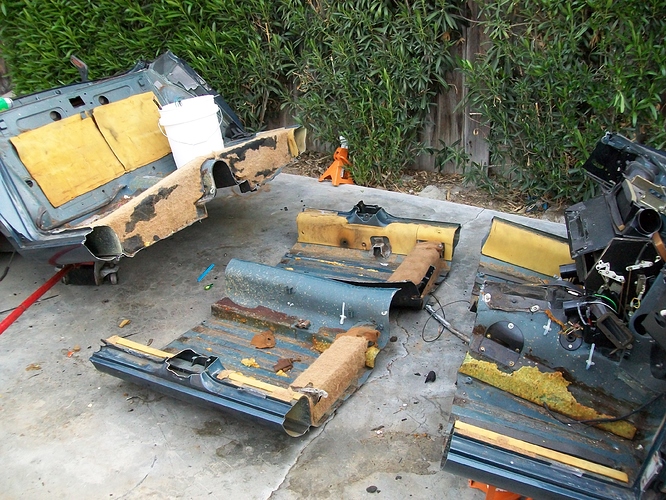 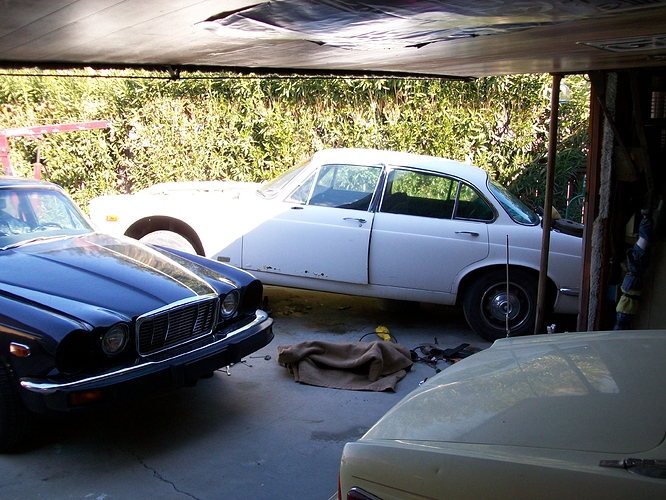 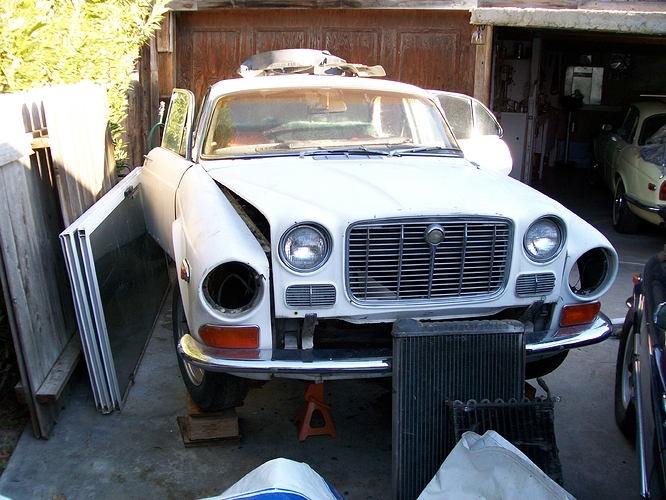 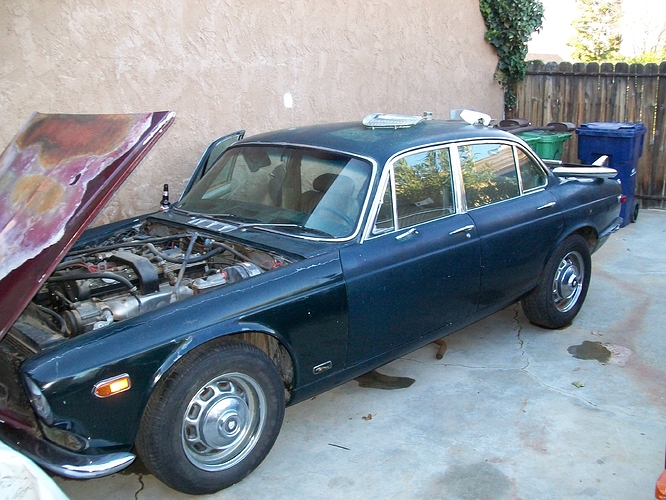 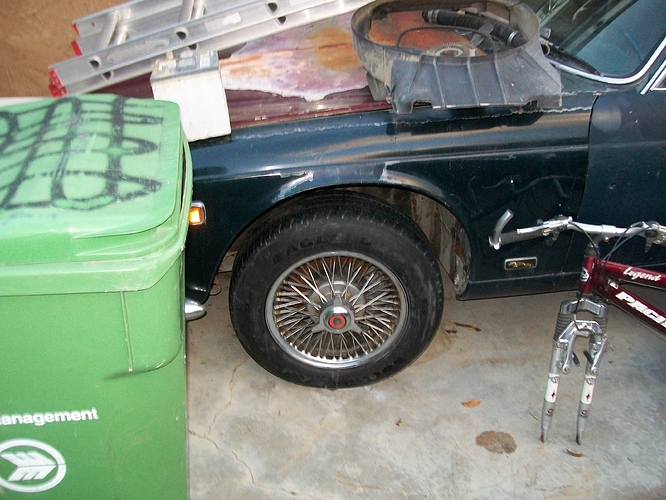 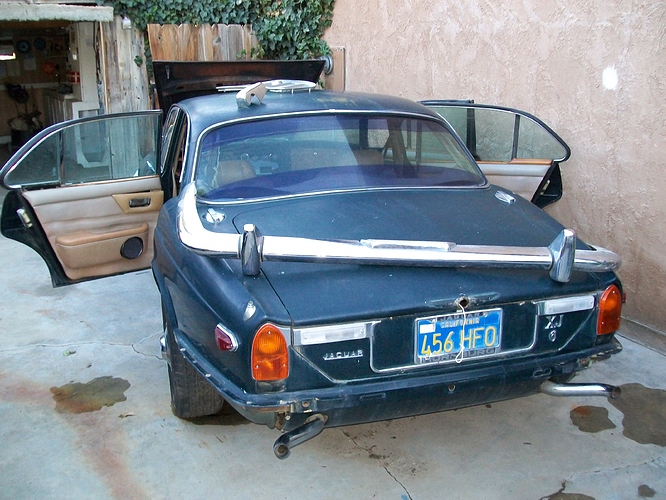 Wow, you probably know those earlier ones inside and out after tearing through them all. I have read about people swapping out suspensions and rear ends on the earlier models because some were better than others?

Jags aren’t common at all in my area, I was lucky to pick this one up for so cheap. I didn’t look for long, but I wanted an earlier model like what you have. The ones I did see had more rust than I wanted to deal with, or the interiors were in real bad shape.

Some thing else on my mind is the wheels. These cars have 5x4.75 bolt pattern, but what about the offset?

Edit: looks like the offset is 33mm, I think early C4 Corvette wheels would work.

Tony, I recall hearing while the Chevy and Jaguar wheels have the same bolt pattern one of them needs to have some grinding (machining) done to the center hole so it fits the ‘other’ car.

I’m not sure what years or models this applies to but you may run into this.