If pedal is soft and no lights on the dash, hmmm…I can’t think of any possible explanation

It’s a Teves III. The pedal pumps up when the engine is off. No warning lights.

Steve,
How about someone removed the warning light bulb? This wouldn’t be the first time some industrious Prior Owner did that.

Both lights are there. They light up when I start the car and then go out.

I’d go on a gravel road and brake hard a couple of times. The ABS should engage and, if a small dirt particle from the old fluid (I am assuming bleeding the system by the manual means the old fluid was flushed) got stuck somewhere in the solenoid block, it will be dislodged and you might see improvement.

IIRC, there was a lister here my the name “CJ95”. He had a soft pedal on his 95 convertible (same as mine) and also claimed no leaks. That was until he removed the passenger front wheel and saw a hint of fluid escaping the caliper seals…

Maynard, I have to ask just on GP…

Is the car new to you?

Some ABS cars just inherently have a rather soft pedal, even when all’s well…to a point, of course. Few (if any) have the high, hard pedal of pre-ABS cars.

I’ve had the car for a number of years. The problem started last fall before I put it in storage for the winter.

Excessively loose wheel bearings or gross rotor wobble/thickness variation can cause the pistons to be pushed back into the caliper; when the brakes are applied this excessive clearance will manifest as a low pedal. You can verify on a long downhill application by releasing the brake pedal fully and immediately reapplying- if the pedal is higher/firmer you are on the right track. Loose calipers can do the same.

You can verify on a long downhill application by releasing the brake pedal fully and immediately reapplying- if the pedal is higher/firmer you are on the right track. Loose calipers can do the same.

And so will some air in the system, first application will compress the air, giving a soft pedal. Subsequent application just afterwards will feel harder.

Jagster here: my brake pedal is on the floor, and I have no stopping power whatsoever. I was reading on another site about the possibility of the fuse controlling the pump motor for the ABS could be blown. Said it was located on the passenger side of the footwell, and I have been waiting for better weather before tackling the issue. Has anyone else had this problem? This car is new to me, and recently bought it from a friend, as he had no use for what we choose to suffer with. Thanks in advance for any help on the issue.

If there are any problems with the ABS system then you should be getting a bunch of warning lights on the dash. Can you hear the pump run when you turn the ignition on?

my brake pedal is on the floor, and I have no stopping power whatsoever. I was reading on another site about the possibility of the fuse controlling the pump motor for the ABS could be blown.

I consider the Teves III ABS system to be unsafe at any speed, but I don’t believe a blown fuse should result in the pedal on the floor. That would be caused by either a leak in the front brake circuit (such as a blown brake hose), a jammed valve inside the ABS valve body, or a bad circuit in the control unit.

I think the first thing you should try is disabling and disconnecting the control unit. Note that you should maintain power to the pump; the pump is not only needed for boost, but the rear brakes don’t function without it. But the circuits are separate, you can leave the pump powered while disabling and disconnecting the ABS ECU. Obviously you won’t have any ABS function, but the question is whether or not your regular brake function is restored.

My brake pedal is low and soft. Have bled it (according to the manual). No air in the system. No leaks.
Suggestions?

You might try just replacing the front brake hoses. One of them may have developed an aneurysm.

Many thanks and my next consideration is to eliminate this nonsense and go with a standard vacuum booster and dual master cylinder, regardless of their origin and re-plumb the brake lines. I suspect others have done this and would appreciate their experience in this matter. I have yet to put it on a lift and see if I can detect any leaks, but the brake fluid reservoir is full. The control unit would be my first suspect. I still have no idea why they chose to adopt this system as the brakes on Jags has not been a problem in all my experience.

As part of my ongoing 5-speed conversion, I am thinking I want to toss the Teves III over the hedge and go back to the 88-earlier vacuum booster / master cylinder set up. The III is not really rebuildable, probably dangerous due to age or design, and I need an accumulator ball which is $300. And I don’t really care about anti-lock, so I am not interested in going to the cost/hassle of converting to Teves IV. I have a Teves III pedal box with a clutch pedal, so I’ll fab an adapter plate that w…

Good plan, IMHO. Note that the basic requirement for that mod is to find a suitable brake pedal housing. The one guy who wrote up his conversion did not, attempted instead to modify the pedal box from the Teves III, and he ended up with a real headache trying to get it all to fit together. Don’t go that route; find a pedal box from a pre-ABS XJ-S before you even begin such a project. The pedal box from a Teves IV car will also work, but presumably harder to find. The pedal box from a saloon will not work.

Many thanks for the tip on the pedal box. I may have to buy a whole car to get one, but they are incredibly cheap here. Mine, for example, was bought for the grand sum of $500 US, and I am sure I saw another one in a parts yard not too long ago. They must look too good to be crushed. Did any of them make it over here with a 4 or 5 speed manual? Back to my find: It starts and runs beautifully; smooth and quiet, faded red paint, nice interior and typically neglected. I think the mileage is 58 or 68 thousand miles. The story was it was lent to the man’s ‘friend’ and was driven until the brakes quit.

Maynard,
The C3 Corvettes were famous for being difficult to bleed and getting all the air out of the system. Then, if you had a disk lateral run-out problem at any of the four corners, you had the caliper pistons pumping with the rotor run-out problem and air was induced into the brake system giving a soft pedal - especially with the OEM lip seal type pistons. The “O” ring seal pistons pretty much solved that problem. My guess is that you have one of you brake rotors with excessive lateral run-out that is getting air into your system. If you find brake fluid around one of your calipers, you have probably found the problem of a leaking caliper piston seal.
Note - at one time I had a classified add on the forum for Teves IV parts including a pedal box with pedal, booster, and master cylinder. That add expired. If you are interested, contact me at awe1@comcast.net.

I may have what you are looking for: 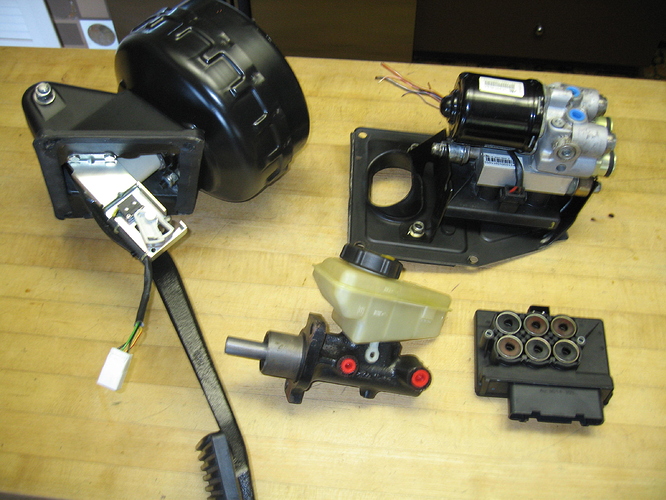