My 95 Celebration has a remote door locking and security system which mostly works well. However occasionally, like now, it plays up and maybe locks the doors, boot and fuel cap cover but won’t unlock them. I then have to use the key to open the doors. Sometimes playing around with the inside door paddle brings it back to life but sometimes I just have to wait, sometimes half an hour before it starts working again on its own. Meanwhile I have to use the key and the inner wire opener for the fuel lid!
Now I remember posting a similar comment on here some years ago when the same thing was happening and I seem to recall that someone, could have been Kirby, suggested it could be caused by a less than perfect main battery, even if the battery functioned in all other ways including starting the engine first time.
I had my battery checked and and sure enough it was not 100% so a new one was fitted and it seemed to sort the remote locking problem.
I now have the same problem with the now 7 year old battery which starts the car no problem. Even after a run the remote was not unlocking so I put the car on the intelligent charger and left it connected after it showed fully charged, while I tried the remotes.
The remotes worked perfectly locking and unlocking with enthusiasm 10 or 12 times without a problem.
Is there something in this? Does the control box need more power than we think! Has anyone else had any similar problems and discovered other reasons or remedies? This system is housed just in front of the o/s rear lamp cluster next to the aerial and uses a single button black plipper with a gold growler on the button. It is the Ford key version. Many thanks. Richard.

This happens to my 96. Typically when the battery is about 6 months from giving me problems.

Just replace the battery and all should be good.

Another solution is to unplug the security module by the passengers footwell and plug it back in.

Your seven year old battery owes you nothing. Its time.

Hi Veekay. Good to hear from you. Do you have any idea why it should be that a battery which can easily start a big Jag engine has problems working a door solenoid?
Also where is the security unit to unplug on a R.h.d car. What does it look like?
Many thanks. Richard.

Similar issue with my '96. A good battery but the remote lock/unlock is extremely sluggish and sometimes fails completely. If I insert the key and lock/unlock several times in quick succession it seems to free up the system and then the remote works much better. It can’t be the battery because it isn’t changed or charged between using the key and using the remote but I don’t know what it is - perhaps lack of lubrication?

One day I’ll get round to taking the door cards off and having a look.

Ive taken door cards off, I’ve lubed all the parts and solenoids…whatever it is…it just is. The car will start no problem, but the door locks become wonky. I have no idea why that it.

I’ll see if I can take a pic of it’s location later.

Thanks Veekay. Ive done all that too! Total mystery!!

Hi Frankie.
I have had the door cards off a number of times and cleaned and lubed everything just as Veekay has but to no avail. I did however find out why my n/s door inner chrome opening paddle would not go all the way back to be flush with the card. It had nothing to do with bent or slack operating rods. The main locking mechanism has many elbows and pivots. One of these across the top looked as if it was returning fully into position by its spring but in fact dirt and rust were preventing this by just a few millimeters. Not much but multiplied over a few more angles and the paddle was sticking out enough to sometimes prevent the door from catching and other times make the door stick not fully closed but locked. On one occasion ot was stuck for 3 days holding the card in place so that I had to fish around down the side of the glass with a bent coat hanger until I eventually found the right lever to pull upwards and the door sprung open
It’s well worth taking those door cards off and learning what goes on inside. Even if it does nothing to improve the remote lock/unlock problem. Cheers. Richard.

Hi Veekay. I see what the module looks like but I cannot find it in my car. Is it in the n/s footwell where that square bump in the carpet is?
Cheers. Richard. 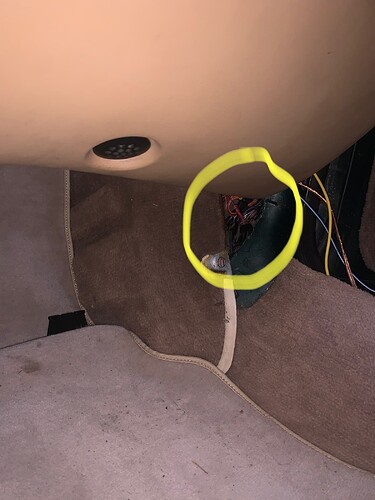 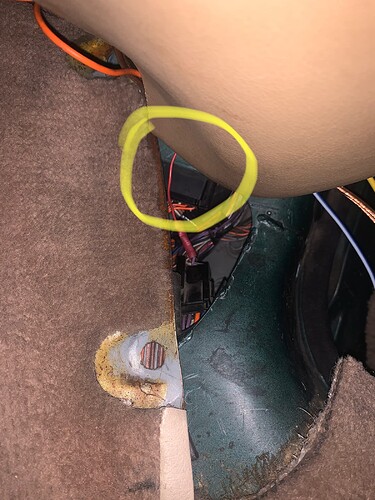 I think it us under the leather clad cover under and to the left of the bolster. Yours being left hand drive may be positioned slightly differently having less room but mine is under there somewhere. Thanks for going to so much trouble.
Cheers.
Richard.