A/C marginal? It might be a bad heater control valve

A/C was very marginal in 95F temperatures. Checked A/C system pressures, and things appeared normal. Decided to check the new looking heater control valve. While the valve portion moved freely, the diaphram didn’t hold vacuum. So when the system applied vacuum to close the valve for A/C, nothing happened. As a result, hot water was flowing thru the heater core all the time. Even with the flaps properly working, there are still internal air leaks in the HVAC unit, plus a 200F heater core sitting there in the unit on the interior side of the firewall. I replaced the valve with a generic plastic unit, system fixed.

This check applies to all XJS models, no matter the year. 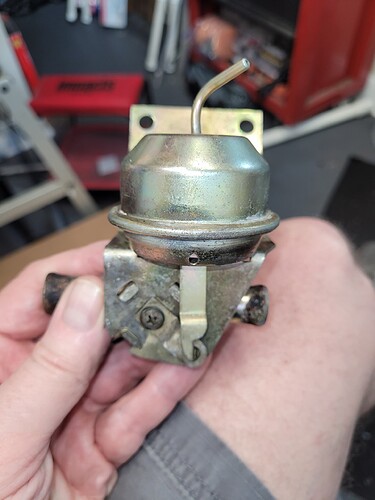 Did you check the vacuum at the hose?
Hoses fail faster than the diaphragm.
Also might be the vacuum manifold under the dash.

I had JUST posted about my bad experience with Superblue’s heater valve (apparently). Maybe something similar going on here? I guess the way to test the gold ball version for proper operation or vacuum leaks is to press the level to compress the diaphragm, and then, before letting off it, putting your finger over the end of the small pipe on the other side. The diaphragm, if fully intact, should not “de-compress” until you take your finger off the end of the pipe (correct?). Otherwise, a vacuum leak is indicated …

I still wonder and have asked though whether the upgraded (i.e. “plastic box”) version of the valve is indeed better/more reliable than the OEM version.

btw, “vacuum manifold”? Where exactly under the dash is that located, Equip, and do our face-lift 4.0s have one?

If it indeed is not working correctly, could that also explain why my CC no longer works (i.e. does it draw vacuum for its operation off of same)?

You can test it that way. I used a hand vacuum pump.

I’ve had one of the metal ones have the valve itself seize from corrosion. The plastic valve is completely different with nothing to corrode. Plus, i got one from Rock Auto in a couple of days for $10 shipped, ans a metal one is several times that cost. I’ve had good luck with the plastic valves on other XJS’.

Sounds like I’ll r/r it then with one of the plastic ones, a.s.a.p… Thanks, Jal …

Only problem is that it shows the fitment for the “upgraded” plastic version to only be for the pre-facelifts (same on all the usual suspects’ websites). I don’t remember that being so, but I guess it is. However, assuming the hose connections (5/8" for the big pair on this version, btw) are the same, I don’t see why it wouldn’t work for the facelifts as well.

It’s the same on pre and post facelift. I just installed it on my recently acquired '95 6.0. The valve you show is what I bought. Rockauto listed 3 plastic valve brands, but they are all the same exact valve.

Question about air flow…I do not have an A/C system hooked up. But when I turn the fan on and set it to coolest settings, I get warmish air. I would expect outside ambient air. Where is the intake for air flow located? If it’s in the engine compartment, then there’s my answer.

Air inlet is the wiper cowl screen at the base of the windshield; air goes to the blowers on each side from there. To get unheated outside air, you need a way to close off coolant flow through the heater core. There are documented mods that will manually apply vacuum to shut off the water valve and open the outside air doors on the blowers.
What you are getting is recirculated cabin air.

Thanks! Going to order one of them now then …

If you turn the temp dial to the lowest setting, the HVAC system should send vacuum to the heater control valve, closing it. That cuts off coolant circulation thru the heater core. This all assumes the heater valve and vacuum system are working properly.

Of course, as soon as you shut off the car, the vacuum is gone, and some hot coolant will get to the heater core. So you’ll get some warm air again after the car is restarted if its parked hot for awhile.

You could put a manual shut off valve in the feed line before the vacuum operated valve (right side of engine compartment), and totally stop circulation in the summer.

That’s a good idea and would work with the original metal valves. It wouldn’t work with the plastic valves since there’s no external linkage from the vacuum diaphram to the valve itself.

You could just run a vacuum line from direct manifold vacuum to the valve, but would have to do the same to keep the outside air doors open. Although you would not have heat no matter the temperature selected.

when I turn the fan on and set it to coolest settings, I get warmish air.

The major problem Greg is that when in Full Cool the system goes into recirculation mode.
Also the blowers are getting hot as they are mounted at the firewall, and if you have a leaking heater valve it makes life even more miserable on a hot day.

The recirculation flaps are controlled with an electromagnetic valve that in turn is controlled by a microswitch at he servo.
I’ve just bypassed the servo control and put a manual recirculation switch in the cabin.
It’s a very easy modification, I believe it’s the “Sawyer’s Mod” in the Book.

The major problem Greg is that when in Full Cool the system goes into recirculation mode.

That’s an excellent point. I’d forgetten about that. So, if he’s going to run without a/c and wants fresh air, but without heat, he either needs to figure out a way to keep the heater valve closed, or rig a switch to turn recirculation off. The latter makes the most sense, as that’s how most cars are set up. Edit: And the last few years of the XJS have a separate switch for recirculation.

So you saying whenever we hit the “fresh air” button on our (facelifts) it also opens the heater valve so that the incoming outside air is heated … ?

No. Facelifts are different. They added controls earlier cars lacked.

This check applies to all XJS models, no matter the year.

That also applies to all Ser 2 & Ser 3 XJ’s with A/C. I had this same problem in my XJ6C. Now there’s another problem with the magnetic switch for the compressor.