Answers pertaining to a 3.8S:

Thanks John, Does the aluminum pan(sump) and or the manual transmission have to come off to put the rope seal out and in?
David

Yes and if you want to replace all the seal then the crank has to come out as well, to do it successfully.

Agreed, The engine essentially has to be almost completely stripped down, cranks out etc. There is a factory sizing tool that should be used to press the rope seal in to the groove just enough to provide minimal clearance with the crank surface. Too tight and they burn away, too loose and they leak.

to do it successfully.

The “upgraded” rear seals are not necessarily a guaranteed fix.

They require the crank to be removed and to be machined to fit a lip seal. There are a couple of different iterations, and all have been known to fail.

We use the standard rear rope seals routinely on our rebuilds. If they are correctly installed they work well.

The factory rear oil seal retainer is a one piece set up using the rope seal.

The housing for the rope seal is in two halves, on all 4.2, and also for 3.8 engines with just the scroll and no seal. Two machine screws from the top, three in the block; the top one will hit the crankshaft which has to be dropped first. I dislike the rear seal conversions.

Thanks guys, all disappointing news. The car is original with 71K miles on it. The leak is not bad, just aggravating to make sure the concrete driveway does not get spotted. More with friends than mine as I can get them up. I prepare a parking spot on the driveway before I leave. If I garage it when I return it is no problem as the garage floor does not mar. I shall wait for the engine rebuild, that may be in ten years from now.
David

I have a painter’s blanket (cloth with a plastic foil backing) and just throw it under the car when I’m at picky places. Now that I did up a few bolts I shan’t need it anymore but it’s not much of a hassle.
What could also work is a wool rag clamped on there. Magnets?

I’ve had the seal on my Daimler V8-250 done now and it no longer leaks.

But when it did I made up a small frame from aluminium (because it’s soft and easy to work with) angle iron which was attached using the bottom 2 of the engine/gearbox bolts. I wrapped a small towel round it and attached it with cable ties.

About once a year (when I changed the oil) I replaced the towel.

It worked perfectly - no oil on the floor at all.

OK, if a machanic saw it he would probably laugh as it wasn’t pretty but it worked.

Robert, you are the kind of guy that made America Great! ‘Necessity is the mother of INVENTION’
For the time being I shall do something similar, not pretty but a functional design! I may use female hygiene produces for greater capacity / volume.
War Eagle

“Back in the day” (whenever that was), cars leaked oil. It was just expected. And it was often at the rear end of the crank. The XK engine was itself an older design when it went into the Mk-II. Chasing down small leaks on these old-timey cars can be a bit of a fool’s errand in my book. I just put a little kitty litter in/on the drip pan and live with them. But I like the idea of a rag holder if a pan isn’t feasible.

Crude and ugly (bit like me) but it did the job.

I like Robert’s towel arrangement. I wonder if it would be possible, instead the towel, to use a tray or tank that could be arranged to empty itself when the car exceeds say 30m/h?

James Bond’s Aston Martin had one of those…

That‘d be nice but it would definitely drip. Drop a restricted vacuum hose in the pan, let the engine empty it

This drip catcher appears to be original, or at least very well executed. 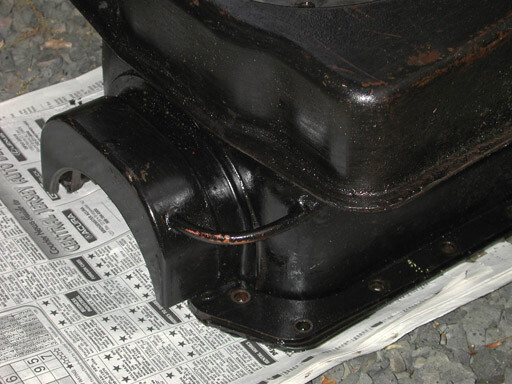 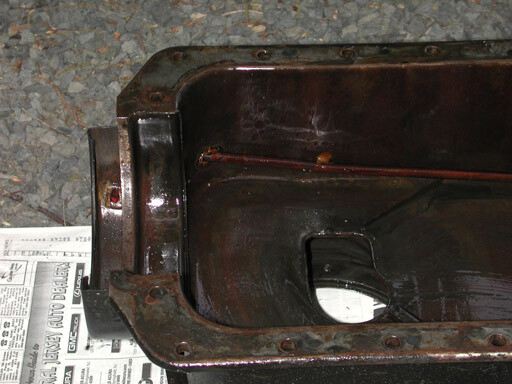 Unfortunately, oil runs backwards through the drain tube when I accelerate. I like the idea of connecting restricted vacuum to the drain tube.

But where would the vacuum suck it to?