Been hunting one of those for years. There are a few in Western Canada but otherwise very rare over here and virtually non existent in USA. I have a thing for Hydrolastic

Around 1996 I was daily driving a 1986 XJS in snowing New Hampshire. XJSs were just used cars back then. I was only 18 making $4.25 bagging groceries and the car was $6000. That was all my money! There was no chance of a second car. I did studded snow tires and it helped a little…. But more often than not, if I was out in the snow unexpectedly, I’d just leave the car somewhere. I used to park it under the overhang at the grocery store and then walk down in the morning to get it after they’d plowed. I did finally wreck it one day coming home from Maine. It was tolerable on the highway with light snow, but the off-ramp did me in.

All RWD cars I’ve owned before were really one wheel drive. No limited slip.

This brakes the spinning tyre so you don’t get stuck as easily. 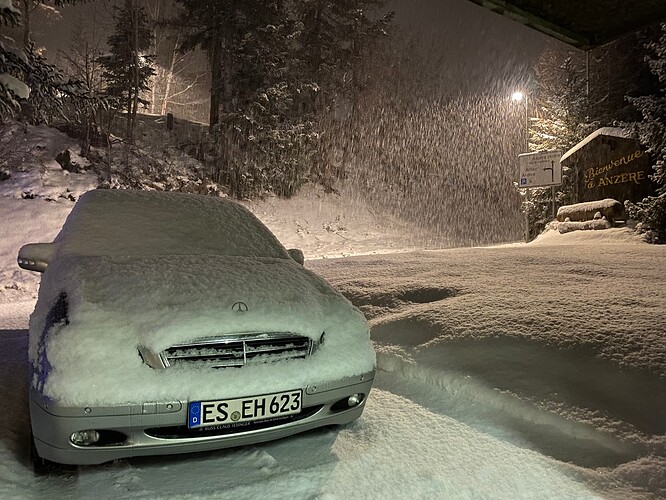 With the XJ I have to be careful. Both my XJ have (had) an open diff so uphills I missed the powrlok. And the system in the BMW was so crude. But I never got stuck, and the car got stuck two or three times in 20 years…

Well, after 90 degrees and accelerating you had traction. Otherwise your wheels would have just spun.
I stand by my statement.

Had an MGB. No problems in snow as long as you didn’t go stupid. Loved that car

I must admit (maybe I’m getting old) , when the going gets tough around here in the winter or I’m in the mountains, I’ll bring out (The Beast) as we name it. I’ve never had a vehicle so sure footed in snow storms and blizzards as this bad boy.
Reliability is also key when the temperature dips to -30C. (Can someone please remind me again why I live in this part of the world) ??? 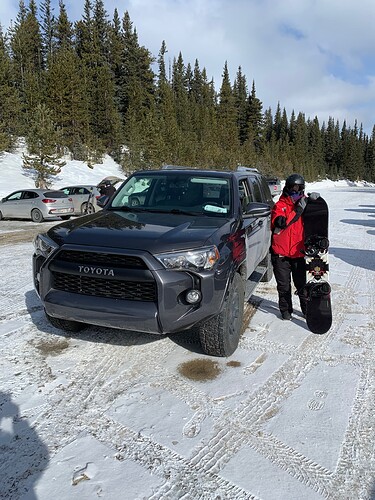 Reliability is also key when the temperature dips to -30C.

Remember when almost any car didn’t have a chance of starting, -20C and down?

With EI and EFI, theres almost always a “let’s start!”

Can someone please remind me again why I live in this part of the world) ???

Can’t help ya… no CLUE how/why anyone lives north of the 40th parallel!

All our daily drivers are either 4 wheel drive or AWD and have been for 30+ years.
We even change our tires over from all season radials to pure winter radials every fall.
I cut my teeth as a teen driver on our snow covered and ice roads in my Dads’s 68 Mercury 390 High Perf that rarely ran a straight line in the winter as it was always in a power slide right beside my friends Dad’s 440 Monaco…lol…its amazing we both survived those teen years.

We even change our tires over from all season radials to pure winter radials every fall.
I cut my teeth as a teen driver on our snow covered and ice roads

Same here. 60 years ago I learned to drive in winter in front engine, rear drive cars on bias ply winter tires. Had to learn to contend with spotty plowed roads, solid rear axles and antiquated designed snow tires. None of this modern formulae rubber compounds with computer designed treads. No tuned IRS back then either.

A study in RWD versus FWD dynamics…

I had a DKW van, which was of course front wheel drive. Even with snow tires, which is the only time I put snow tires on a vehicle in the last 40 years or so, it was utterly helpless in the snow.

(This was back about 1987 or so: even then, finding 16-inch diameter, skinny snow tires was quite a problem!)

Now onto the E-type. (ObJagCon!): in the late 60s/early 70s, dad shod it with four studded snow tires, and unless the snow was so deep that the nose acted as a snow plow, the thing was virtually unstoppable in snow!

Then, my mom drove a Datsun 240Z: it was also utterly helpless in the snow. Lest one think it was just a case of an open rear differential, my Datsun 1200s, of which I had many, would zip around in the snow, just fine, with nothing more than all-season radials on them.

As far as steering in the direction you want to go, what happens when that doesn’t work anymore and you get understeer? No way to pull out of that.

Snow tires can make a heck of a difference, but they won’t do magic on a crappy driver or a car that just isn’t suited to such.

Beyond that, snow performance in my experience isn’t as cut and dry as FWD vs RWD.
I’ve seen examples of both that suck and both that were quite good.

The best of all those bunches remains my 82 VW diesel pickup. I’ve driven around so many stuck or spinning FWD’s and RWD’s and AWD’s and 4wd’s in the last 20 years it’s not even funny. The tractability and ability to modulate the throttle precisely (and lack of power) and excellent feedback of every kind of input you could want make the difference in its case. Just not a ton of ground clearance so you’re limited on depth with the oil pan hanging out in the breeze as it does.

The XJS does not have the ground clearance, least not my 90 as its beat to death front air dam will attest. Panther chassis fords seem to do well, especially with suitable rubber, but they are pretty vague feedback wise. Older RWD Volvo’s are solid (go figure, Sweeden) and have furnace like heaters.

Likewise Saab. The first FWD car I ever drove and later owned that had no torque steer and wasn’t electronically nannied was a Saab 9000 Turbo. Excellent car.

Older RWD Volvo’s are solid (go figure, Sweeden) and have furnace like heaters.

My 97 Volvo 850 wagon with FWD and studless snow tires is a trooper in the snow. It especially loves passing BMWs stuck in the snow.

And yes, the heater is lava hot.

Beyond that, snow performance in my experience isn’t as cut and dry as FWD vs RWD.
I’ve seen examples of both that suck and both that were quite good.

The Mercedes I put a picture up of earlier is not great in the snow, that picture was taken around 2am and all that snow was fresh. In the morning we drove up the hill behind the first snow plow, as much as looking at the throttle would make the tyres spin (fresh, good winter tyres). It was not easy!
On the way down I almost crashed thanks to the ESP trying to help, after shutting all the stability helpers down (not the ABS of course) I enjoyed it. Never had the ESP in snow experience before.

My small BMW was so much fun in the snow, really miss that. Had a chance to drive a big new 335d (tons of torque) in the snow last winter and it was manageable. That car probably sucked the most. Sprinters and other vans are strange and AWD makes you forget that you need to break. I don’t know many people that own FWD cars. Maybe good for traction from standstill but nothing more.

With all cars you have to be able to drive or react to loss of traction, otherwise you might land in a ditch one day or get stuck in a blizzard and hate yourself for not reacting better.

Here in Seattle, we have a problem of steep hills and ignorance.

Case in point, I’m following line of cars up a steep hill in about 4" of snow (yeah, we get snow, but not much). Just keep moving.
Suddenly, car in front of me decides to stop and let someone pull out of a driveway! I’m saying, no, no, no! Sure enough, once they stopped, they could not get started again. Luckily, in keeping my distance, i simply went around them.

We also have a problem of snow melting a bit in the day, and freezing overnight.

We also have a lot of suvs who think AWD is invincible, even with just all weather tires, and don’t slow down. Always a lot of SUVs on sides of roads here.

And… we may get snow tomorrow in the forecast! Think I’ll stay inside.

The older Mercedes I’ve had were not great in the snow either. Back in the 80’s ish they tended toward odd throttle linkage setups that tended to feel kinda dead and non-linier(but were mechanically quite attractive). Especially on the turbo diesels, they’d spool the turbo and break traction if you weren’t super careful. Doable but not point and click. One of the very few times where a lack of low end torque is a good thing.

Here in Seattle, we have a problem of steep hills and ignorance.

Oh, we have one here… dont we, @skiracer?

When I worked at USGS, I had to go up that hill every day, and there was many a day I had to drive five or 6 miles out of my way to get to work, because when it’s slick, there was no getting up!

And I don’t care if you had front wheel, drive or rear wheel drive, and often times all wheel drive wouldn’t make it up.

The biggest issue with getting up that hill are all the idiots in front of you that tried and are now stuck, blocking the way. That hill is one of the worst in the Denver area however.

I was there last week as part of the taping crew for Silver Fern rally, just under 1000klms of special stage gravel and 1800+ tarmac touring between stages.
I took the four Malaysian Uni students who were with us to have a look they were somewhat gob smacked at the steepness.

Ha, and so it begins. About 1/4" of snow here in Seattle, and people are freaking out.

Quick, to the XJS, and the nearest parking lot!!

Take it slow so you can slide it out.