Hi Folks,
Newbie here. I had an XJ6C in the past. This is my first XJS, and loving it so far - except - the accelerator/brake pedal arrangement is really counterintuitive and difficult, at least for me. I am almost 6 foot and fit into the driver’s seat all the way back comfortably. However the accelerator pedal is so close to the console wall my shoe scrapes it constantly, and more importantly, the top surface of the accelerator pedal is set so far back from the surface of the brake pedal, I consciously have to lift my foot at least 8 inches to engage the brake. This is annoying and even dangerous as I sometimes snag my shoe on the brake pedal coming up to it and have to position my foot on it just right so it doesn’t slip off to either side. Also, to engage the transmission kick-down switch I have to stretch my foot our so far I am almost pointing my toe horizontally. Has anyone else experienced this? Is the accelerator pedal position adjustable? If not the only fix I can think of is strapping a wooden or rubber block to the accelerator pedal to build it up several inches.
Anyone?
Thank you,
Richard

Welcome , i think you accelerator ped is bend or out of alignment 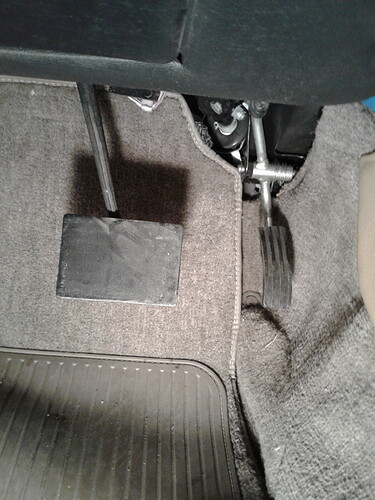 I cut off bottom corners of my brake pedal and fit a different rubber pad from my Volvo 850. Helps.

Before you proceed any farther, you should note that the XJ-S accelerator pedal routinely gets distorted. With the hood open, have an assistant press the pedal to the floor. The turntable (presuming we’re talking about a V12) should rotate 90 degrees until it hits a hard stop. Then the assistant should be able to press harder and engage “kickdown”, meaning the housing if the throttle cable gets pulled toward the turntable against a spring and engages the kickdown switch.

Chances are good it’s not possible to engage the kickdown switch, and some of us have seen cars that didn’t even get the turntable to turn all the way. The problem is that the gas pedal is an L-shaped member with the pedal on one leg of the L, a pivot joint at the corner, and the throttle cable on the other leg of the L. When stomped, the L spreads a little bit, rather than faithfully transmitting the stomp to the throttle cable. And eventually the L takes a set spread a little bit.

Fix is to take the pedal out of the car, bend the two legs of that L a bit toward one another, and then weld in a little brace between the legs of the L so it cannot spread again. Make sure the brace won’t interfere with your toes. Reinstall and readjust the throttle cable. You will be able to feel the difference when you stomp it, as the pedal seems less mushy. And if you’ve never had a working kickdown before, you’ll feel it in the seat of your pants, too.

Doing what Kirby suggests made a BIG difference on my car, including kick-down response. 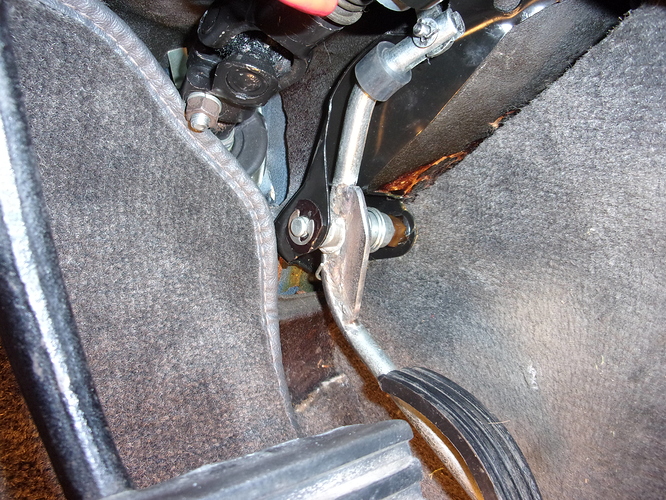 Brilliant re-engineering! How many other mistakes can you name?

Is that made of steel?

Yep. pretty fragile, considering. You can just reach down and pull it back up to where it should be without too much effort.

Hmmm, sounds like it could easily stress crack. I may do what you did to prevent future calamity.

Thanks Kirby, Dave and all. Here is what I am dealing with. Mine is a 6. Is this anywhere near right? 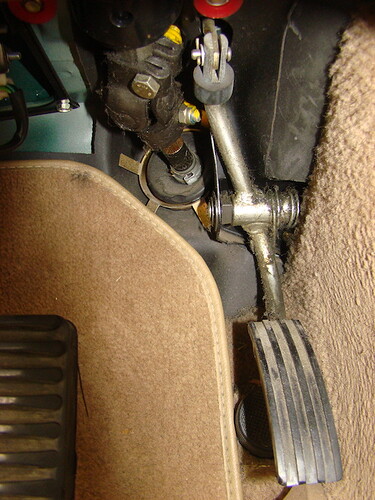 The gas pedal should be centered above the stop, and to me it looks like it is bent to the right. Hard to tell from one photo. It would be helpful to have a photo of the engine end of the cable- My engine is different from yours so I don’t know exactly how your cable/kickdown is arranged. I still think that adjustment will fix the problem.

My car is an XJ wuzza 6. But similar pedal arrangement. Early on, I opined that Brits have narrow feet. My feet are not extra wide. but, the space between the brake and accelerator is narrow. I removed the pad from the brake pedal and cut off the right side. Now the edge of the rubber and the edge of the steel are aligned. Gained about 1/4". Much better.

Not a huge issue as I am a two foot driver. brake left ant throttle right.

One of the adjustments I needed to make was to assure WOT with the Jaguar pedal opening the LT1 throttle.