Does anyone know of a company re-manufacturing these plates?
They are normally individual letters / digits that slide into position.
They are white translucent plastic and the light from the number plate box shines through them.
I see some second hand ones on Ebay but would like new ones if available. 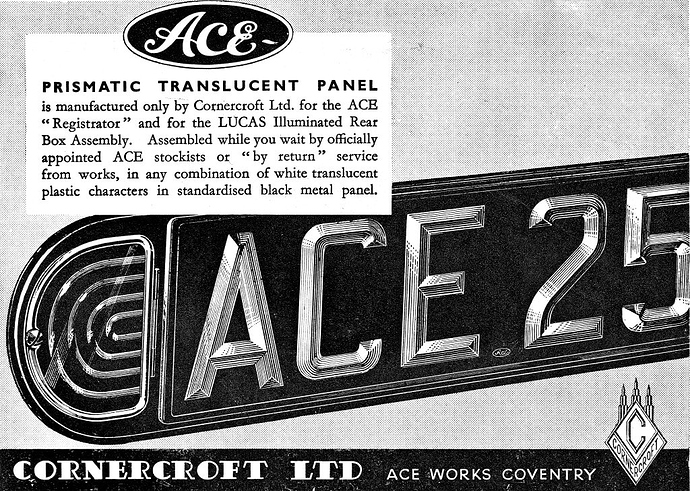 Hello Graham, I do not know of a company re-manufacturing translucent Ace plates. A suggestion would be to inquire with Ace Peak Plates, see http://www.acepeakplates.com/ , who are using “original Cornercroft Ace die sets and die casting equipment” manufacturing Ace plates today. 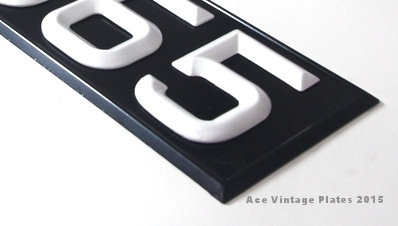 Mine do not slide into position, they have washers and studs which are sort of mashed down. 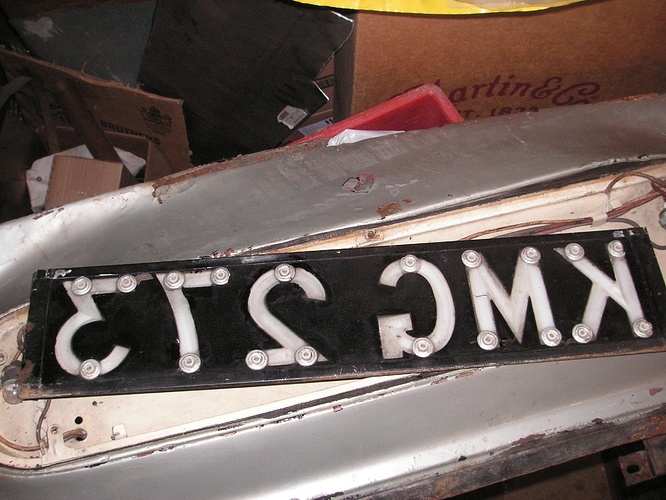 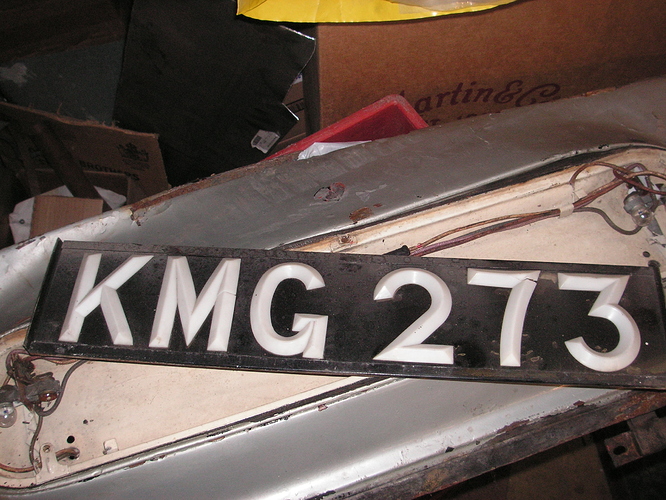 Its not obvious in photo, but I am sure these ACE PRISMATIC TRANSLUCENT PANEL plates are exactly what was on my 1966 E-type (LTX745D) when I purchased it in England in 1975, and they are a FLAT PLASTIC panel, with the letters/numbers engraved into the rear of the plastic sheet or panel. After engraving the whole back of the plate, including the engraved numbers is sprayed/coated with a silver paint, but it does allow for some rear illumination against the otherwise black plastic non-engraved front.

If that is what you are after, you will need to find someone who will engrave your specific required number, as these are not a case of assembling individulal numbers as the common ACE Peak cast aluminium or cast plastic numbers plates that are assembled/rivetted onto a backing plate.

Thanks for your reply.

Yes I tried Ace Peak Plates (I have them supplying me a plate for my 120) but unfortunately they cannot produce these ones and were interested themselves if anyone does.

The advert I showed is possibly a bit confusing in that it would appear to show the style that Rob has however they did also produce the individual character type that slide in and are illuminated.
These are what I’m hoping to find. 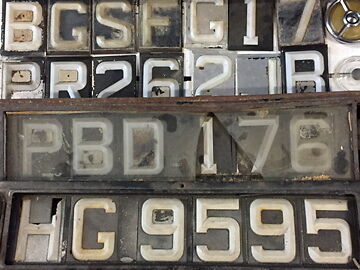 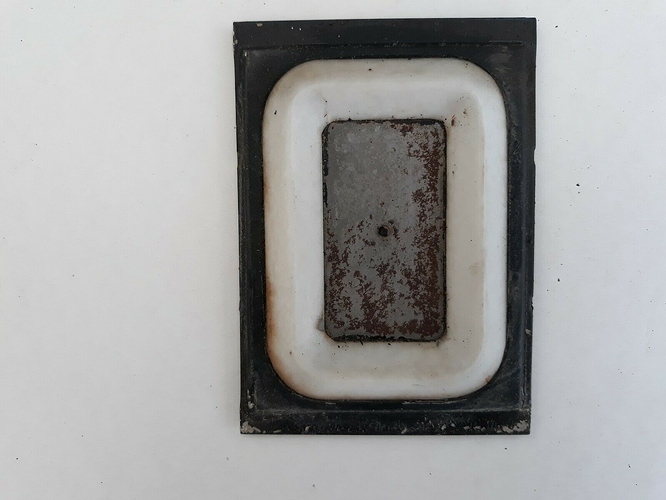 Rob. Are those letters plastic or aluminium?
If plastic does the light illuminate them?
Cheers, Graham

Yes they are white plastic and the lights on the sides of the tail lights illuminate them. Sort of… 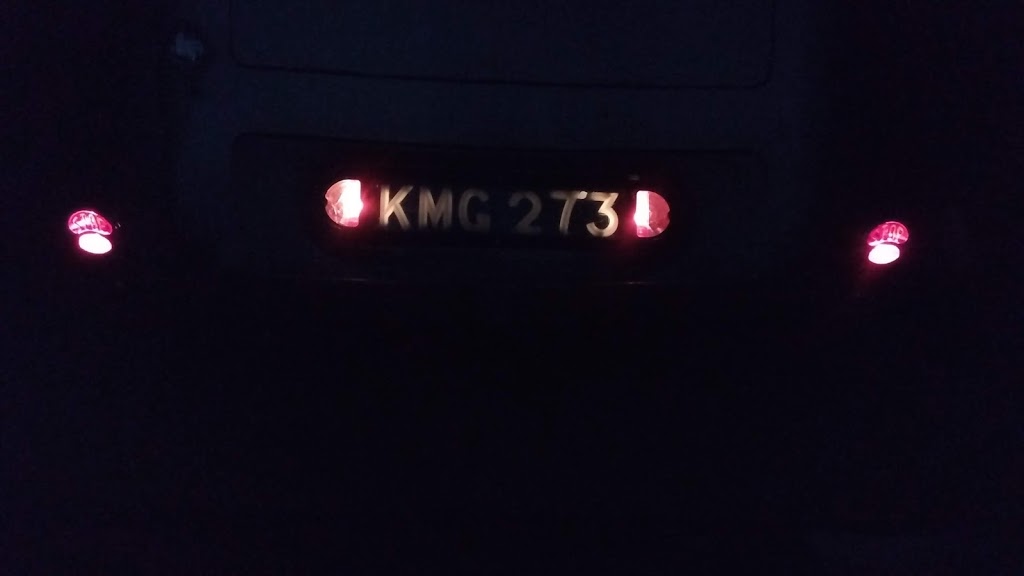 I have some pictures of the Ace Peak Prismatic license plate letters and numbers.
The plate on my car has the wrong registration so I am wanting to trade.
I have a 3, 4, E, M, and a V.
Desperately seeking letters K, L , Y and two blanks. Any leads are greatly appreciated. 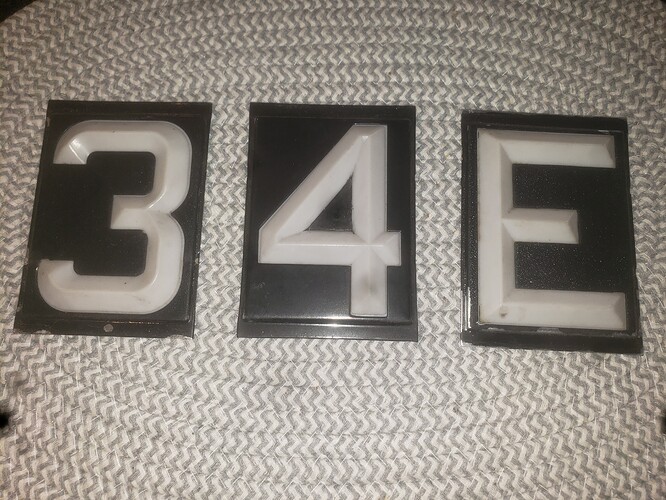 We recently acquired yet another huge cache of new and used RR&B parts spanning many years and this was amongst them. We are parting out a great many EPW cars, including coach built variants from 1946 to 1954.

There’s definitely an opportunity for someone with a 3D printer here. Although the originals had metal cut-outs to mask the backgrounds I’m sure black paint could be used instead.

Ive just bought 1936 SS 1.5 saloon.
I attach some pics for information.
The rear number plate has the correct round lenses.
The LH lens is still there and is vertically ribbed glass, slightly convex domed.
At the rear this lens is sectioned vertically into two unequal halves. It is hard to tell, but it seems as if the inner of these two halves was once painted red, since the reverse is dimpled and it bears a very slight red tint
It has a clear glass number plate, which is blacked out, leaving the numerals showing clear.
For some reason, on the inside, the black paint has been overpainted with white, and this white can be scratched off, being rather chalky. Possibly its a heat resistant finish to stop the black paint from crackling.
The black paint is smooth with no brush marks, giving the appearance of having been screened on.
The glass is held in by two small continuous steel angles, held in by round domed-head screws, with no bolts, screwed in from the front. 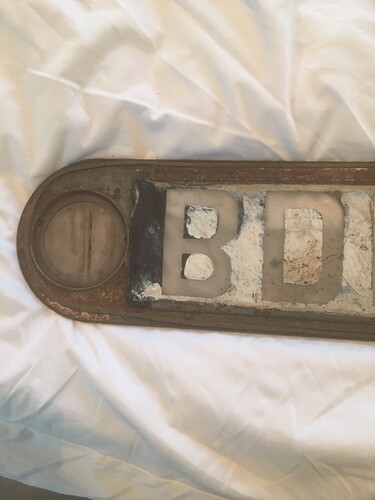 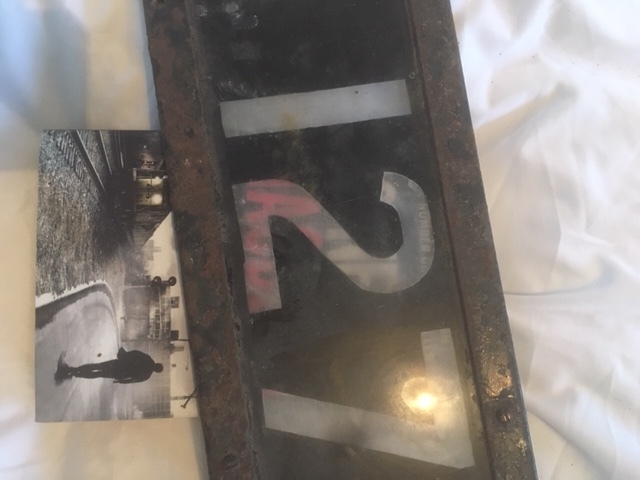 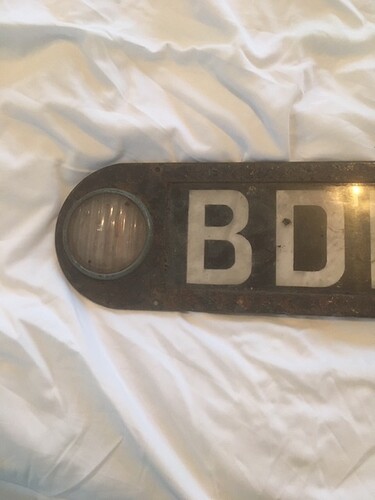 I would imagine that having white background rather than the black the characters would be better illuminated and also show up better in daylight.

Ive misled you.
The letters and numbers are left as clear glass…all the rest has been blacked out to allow light to shine through the letters.

On the reverse, the black has been overpainted with white, but it is not as tough as the oil paint that would have been usual in the 30s.

But you’ve raised an interesting point. If the rest of the area behind the plate is white, then adding white paint to the back of the number plate wil,l as you point, out enhance the reflected light.

I cant get at the back of the car yet, to see whats inside.

Terry, You haven’t misled me. Your photos showed that the characters were the clear glass parts. I don’t think that you should paint over these clear parts but I do think that white paint on the back wall of the box would be beneficial.

It is hard to tell, but it seems as if the inner of these two halves was once painted red, 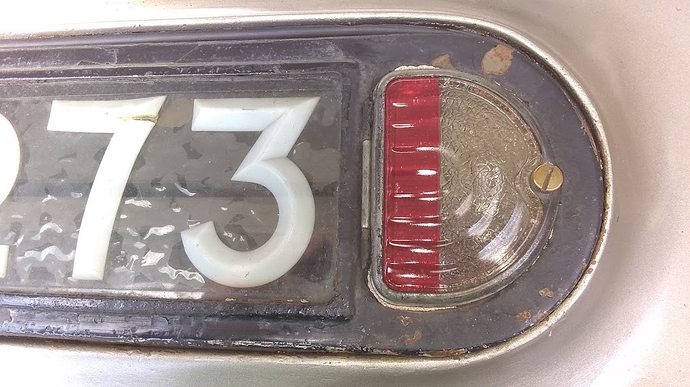 My light box is also painted white inside, to show up better at night. 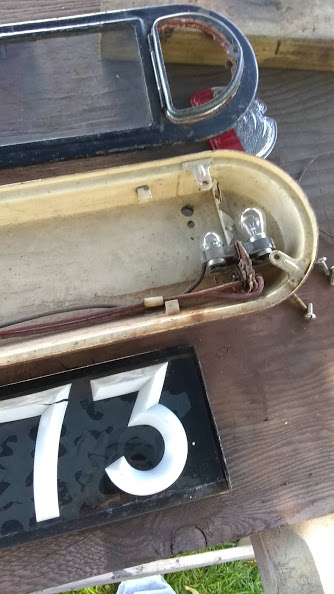 Hi Michael, i am after an E. If you still have it, what price would it be?

Hello Anthony Foster,
Yes, I still have an E in my parts collection. The price would be $40 plus shipping .
Where would you like it sent to?
It looks like there is currently one for sale on Ebay UK for 59 pounds but no shipping offered to the US.

Im in the Uk, if your in the USA, the shipping would be prohibitive for me.