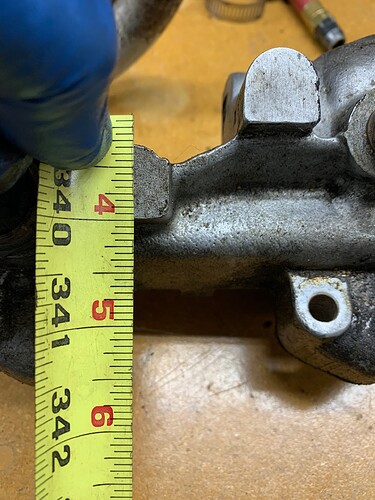 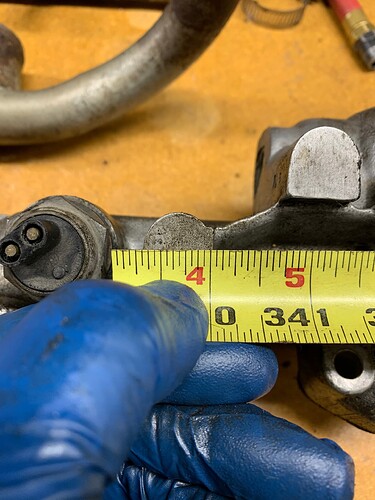 Had another thought. The EGR valves are removed on my engine thus the EGR sensor to the left of the second photo - wonder what threads those are and if I can get a plug for it, drill / tap the plug for the temp sensor?
It is 18 thread count, about .86” diameter. 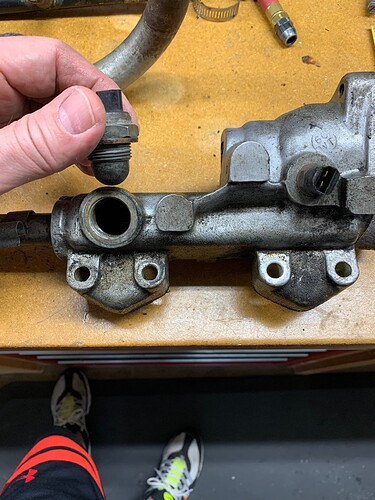 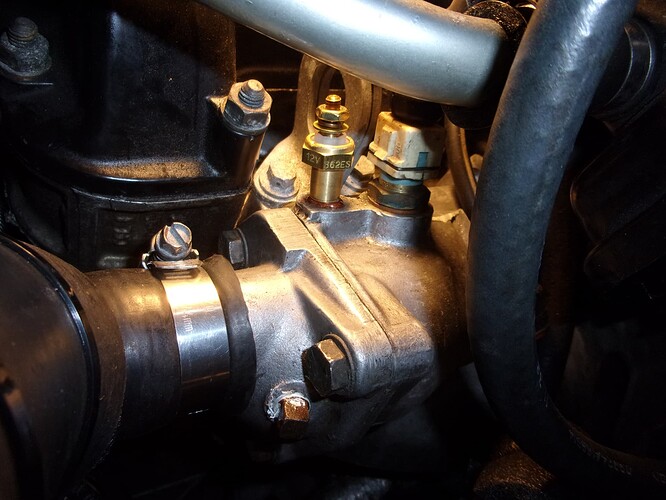 Many of the threads on the V12 are metric. You need to buy yourself a metric thread pitch gauge and a metric caliper. The thread on the EGR valve in your hand may be M15 x 1.5 pitch. 15 being millimeters ( the diameter) and 1.5 being the mm distance between the threads. SD Faircloth

Ah Ha! You’re correct. Indeed this sensor is a metric thread. I went to O’Reilly’s to look for oil pan plugs and sure enough, the M22 1.5 plug screwed in nicely and snugly.
My first realization is that it isn’t threaded all the way up to the head, which we need as it seals by a compression washer to the body.
Also, threaded part of the plug is too tall, an easy fix.
So I inserted the plug into my drill press vice and drilled a 9/16” hole. The 5/8” tap really calls for a slightly thicker drill bit, but I only have a 9/16”.
Then I tapped the 9/16” hole for the temperature sensor, 5/8”-18.
I screwed in an old sensor, snugged it up.
Even screwed on rubber hose, used some hose clamps, and immersed the assembly in water with 30psi air pressure to ensure my compression washer was holding. 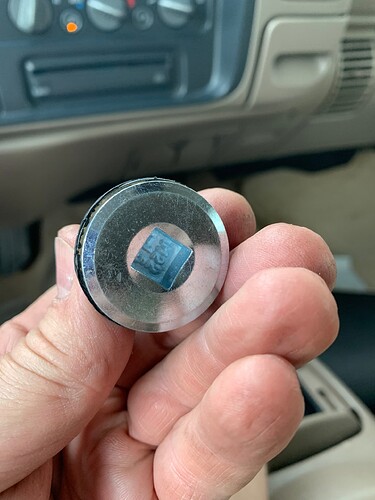 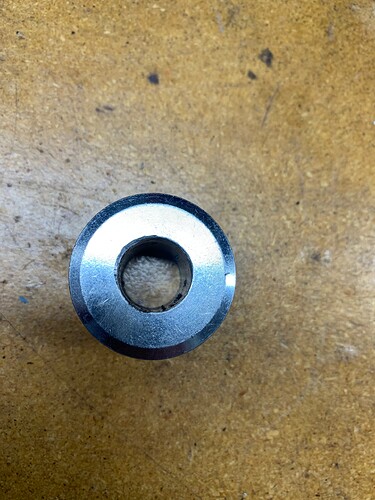 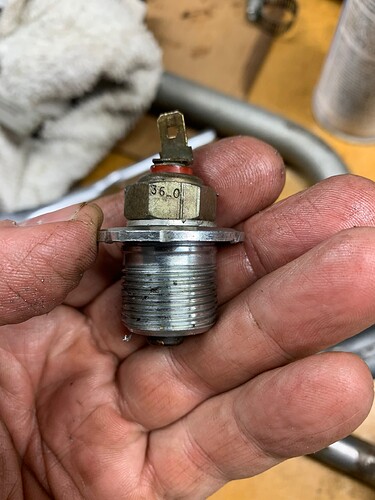 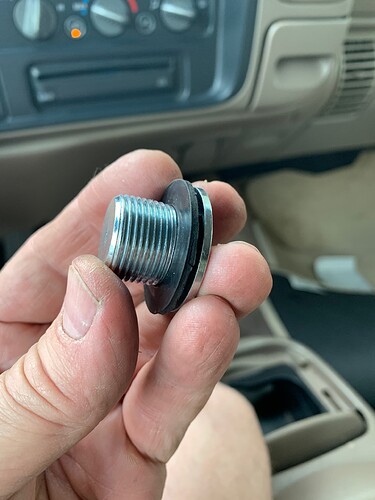 Follow up to modification to add temperature sensor to the M22 1.5 oil plug purchased, which screws into the EGR Valve water temperature sensor:
I rigged up a rubber hose/clamp system to test my temperature sensor screwed into the plug. Put 30psi pressure on it and briefly immersed the assembly in water and saw no air bubbles.
The water rail has been reinstalled, all the new coolant hoses installed, coolant installed and engine started. Hey! No leaks anywhere. Let the engine warm up and get to fully operating temperature. My new Gates boxed MotoRad thermostats that have enough movement to fully close off the water bypass are doing their job. The water rail on each side, when engine fully warmed, never exceeded 180-182F.
Next I will run a new left hand bank temperature sending unit wire to a toggle switch inside cabin of car and put in line with gauge. I’ll be able to flip between left and right to check temperature of each bank.
Here’s a photo of the new left hand temperature sensor installed in the old EGR sensor hole: 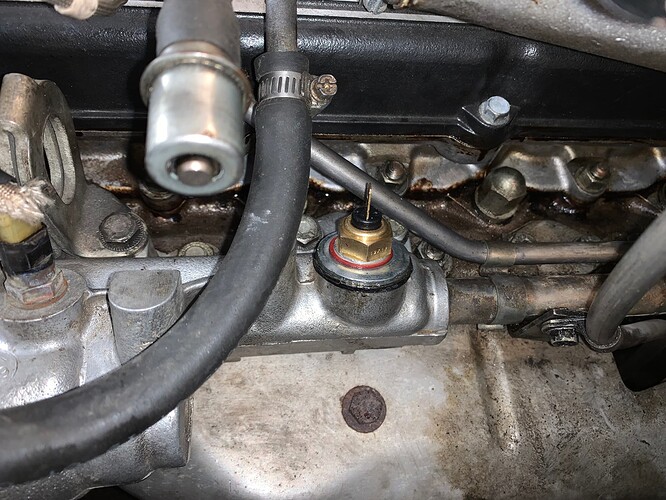 Update: I’ve driven the Jag for several days in a row including some highway runs and some stop-n-go traffic. With my full-extending Gates labeled MotoRad thermostats and my properly grounded voltage stabilizer, my engine temperature gauge never indicates higher than the right-most leg of the letter “m”. Good news. Also, I installed a left bank temperature sending unit of the same part number of the one on the right and the temperature gauge needle really doesn’t move when flipping to the other bank (and allowing time for the bimetallic strip to settle).
The ambient air has only been up to 70F recently, but so far I have no indication that the left bank is running hotter than the right bank.

Just want to add a caution about coolant temperature sensors in my 1977 Series 2 pre-HE V12 Jag sedan. I too have left and right bank sensors with a toggle switch in the under-scuttle to ease anxiety about overheating.
I purchased 2 new sensors from Rock Auto and they both sent the needle to the “l” of normal, no further mind you, but that seemed just a bit too hot. I have been trying everything I can think of to bring those needles down, but the engine seems happy as things are. I checked the instrument voltage regulator thinking maybe the full 12 volts was going through but the bi-metal ticks away between 12 and 4 volts. Finally, I re-installed the original sensor on the right bank and voila! the needle stops at the “o” and stays there. When I switch to the left bank- back to the ´l’.
So, did Jaguar change the sensors for the HE, or maybe the XJS, and abandoned us poor pre-HE types? Buyer beware, especially for after-market parts, all sensors are not alike!
Donvan/

Yes, Jaguar did change the sensors at some point, maybe more than once, and there is a big confusium.
I too got a new one for my HE at one time and it was not reading correctly.
You can add resistors in series with the new senders and they will bring the needle down.
I believe something like 25 to 50 Ohms will do.