I’m just cleaning up the original lower ball joints on the front suspension of my 140. The old units comprise a chrome-plated ball, and a bronze-looking cup. Both have polished surfaces where they were in contact, but no pitting or ridge wear. I’ve bought a new SNG Barratt kit, which includes cups made of ‘Morganite’, whatever that is…
I would expect the original components to be those the factory fitted, as this car was put away with 70k miles in 1983 and stored. What’s best advice on these now - clean and refit the originals, or go with the new and the ‘Morganite’?
Thanks
Roger

SNG is perhaps incorrect in calling their material Morganite, which was a bronze alloy. Is it perhaps nylon or a fibrous composite?
Do you have the grease fittings in the lower caps?

This subject has come up many times on this forum. The Mark V was the first Jaguar model to have ball joint front suspension, and they used most of the same parts for XK120. Jaguar initially made the Mark V and XK120 with Morganite bronze cups and grease fittings on the lower ball caps. Then came one of those “seemed like a good idea at the time” moments in engineering, when they attempted to come up with a greaseless design cup called Ferrobestos and eliminated the grease fittings. Thus wor…

In reply to a message from BISHOP-13 sent Thu 31 May 2007: I did a web search for Morganite and found the parent company is Morgan Crucible in Swansea, which makes composite materials such as carbon/graphite and sintered silicon/carbide bearings, among many other things like the carbon brushes in our generators and starters. Unfortunately impossible to guess exactly which material they were selling to Jaguar in the mid 50s for sockets. Mine had what I presume were Ferobestos sockets, a …

My car is an early 1955 140DHC, and yes, it has a large grease nipple in the base beneath the balljoint. Would you advise sticking with the old parts, or replacing ball and socket?
Not sure what the new SNG parts are as (ahem) I can’t find them at the moment.

Roger,
Just placed these SNG parts on my 1954 XK 120. The new cup (or Socket as Jaguar calls it) is a rather hard plastic material. Don’t forget to remove the steel ring (Spigot C.3024) in the upper part because the SNG version is a replacement for cup + spigot.
My old “Morganite” cup (see second pic) is in fact still looking good but after cleaning all parts it became clear that even without any shims there still would be too much play.
The old cup is a kind of thermoset material with a “woven fiber” reinforcement. I understand that this may be the second generation Morganite as I also found these on my XK 140.
Also the chromed balls still looked good and comparing with the new ones the diameter was only 0.2 mm less than the new ones, but still too much play. So I replaced the original versions. See picture with the old parts on the left and the new kit on the right. Also notice the metal “spigot” that has to be removed. 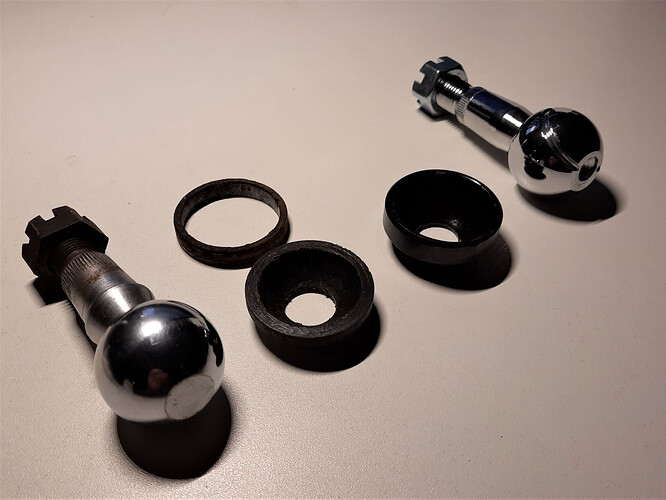 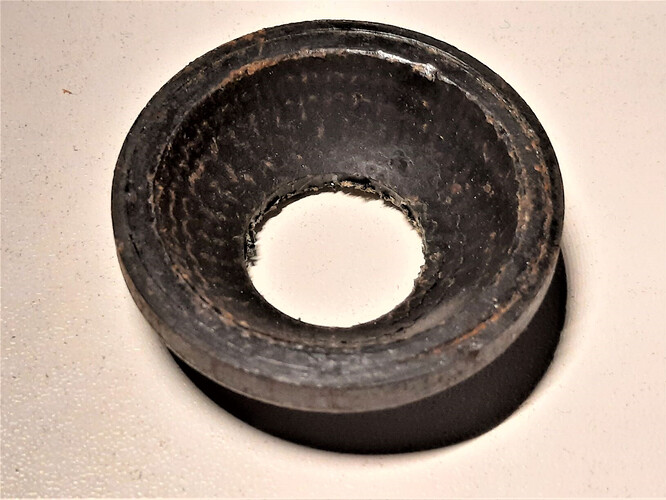 Good point, Bob. The first thing to do would be to assemble them and see if they have worn beyond shimming adjustment. My instinct tells me I’d prefer to stick with the original metal if I can, but they have to work.

Bob, your old cup with the woven fiber is Ferrobestos made by Tenmat Ltd in Manchester, which Jaguar tried in XK120 and Mark VII for a couple of years before going back to Morganite bronze made by Morgan Crucible of Swansea. NOS Ferrobestos cups were still being sold by some outside vendors in the '70s when I put them in my Mark V.
The hard plastic cup is I believe the latest generation reinforced nylon. Given a choice that’s what I would use.
Given the low mileage and easy driving most of these cars can expect in future, any of them would probably be ok with proper shimming and especially grease.

I wonder how cups made of Vesconite would fare? I know one or two members of the ACOC have used it for bushes etc. in their Aces. A cup would be pretty tricky to machine on my old Myford lathe, otherwise I’d experiment. I have some of this amazing stuff in rod lenghts but not the size required for these cups.

Interesting new material I hadn’t heard of before. Can it be poured or injected into a mold? If so it could replace reinforced nylon cups, but if not it might not meet a good price point in our niche market.

Morgan Crucible Co. dates back to the 1850s, and bronze oil retaining bearings was just one of their many product lines, of which they used the Morganite name for several. 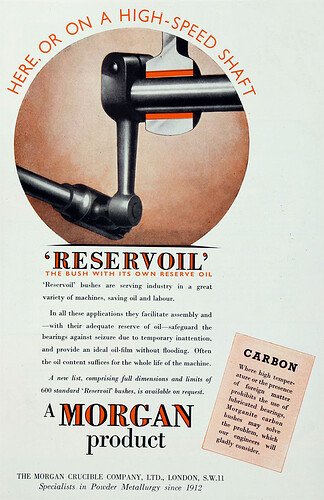 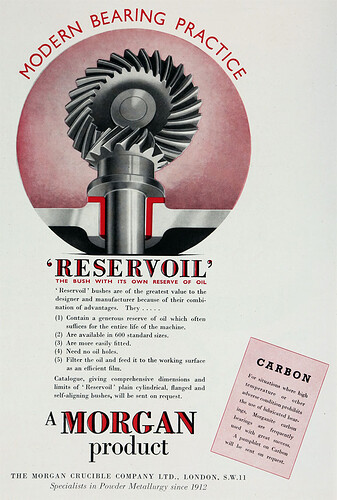 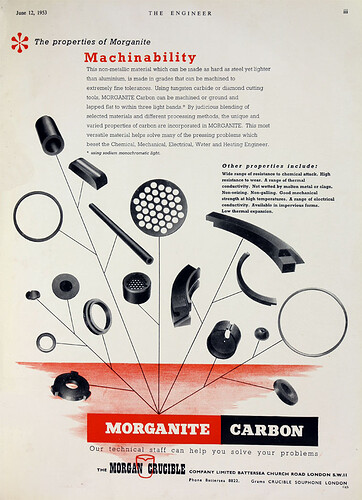 Im1953EnV195-MorganiteCarb760×1047 154 KB
The history of Ferrobestos is a little more circuitous.
Herbert Frood’s Ferodo Brake and Clutch Linings is the source, but they were partially owned by Turner and Newall, which had an interest in Turner Brothers Asbestos Co. which became Tenmat. 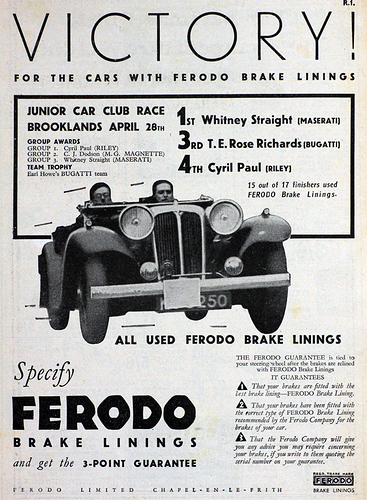 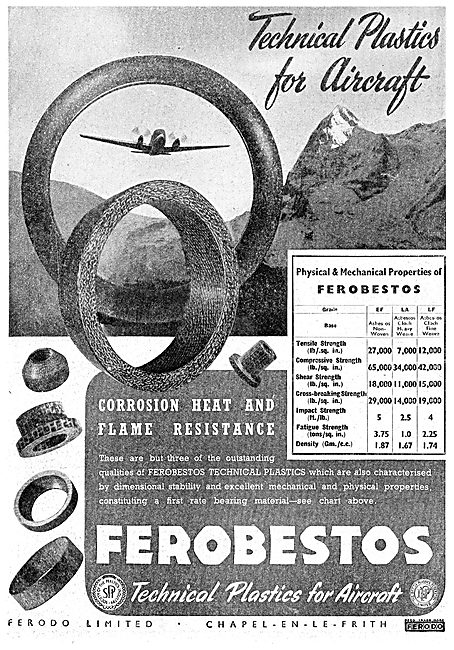 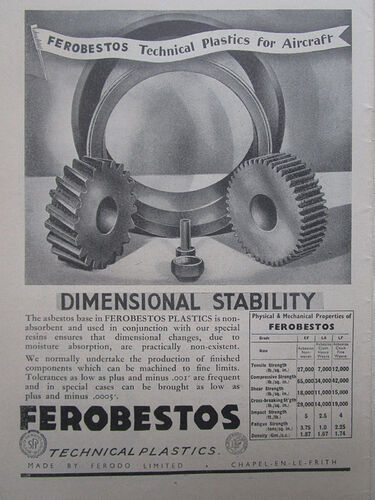 Thanks Rob, now it becomes more clear. My August 1955 also had these Ferrobestos cups, so the change back to Morganite is most likely after that date. So the periode of use for the Ferrobestos cups is at least 1954 and 1955.
I also noted that SNG provides a ball and cup that both have a groove in it, probably to get a better lubrication. This wasn’t present in the original Jaguar parts.
What worries me is that these 1954 lower caps have no grease nipple!! So greasing is one time only or “sealed for life”. See photo. I have no reason to assume that this cap has been replaced. 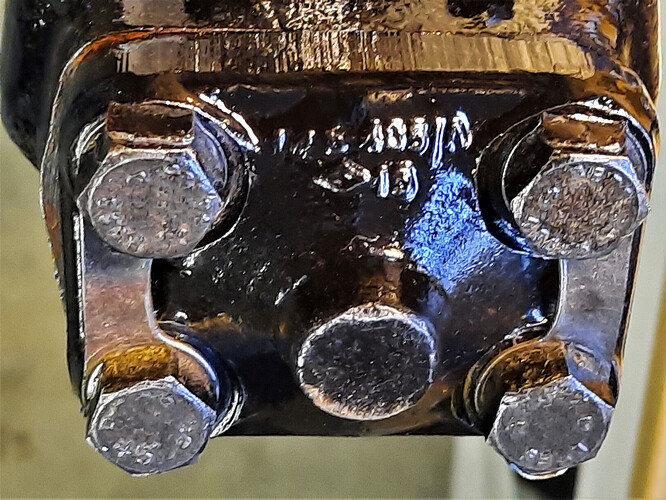 Viart (Terry McG.) indicate in “XK 120 Explored” that only the early versions with the brass cups have a grease nipple and the later Ferrobestos cup is regarded as “self-lubricating”. But in “XK 140 Explored” (Roger P.) the grease nipple is shown again. No idea what the life will be of the modern nylon version without the greasing possibility.

And that is exactly why I drilled and tapped mine and installed Zerk fittings.

Not sure greasing Nylon is a good idea? Many other polymers, particularly the Vesconite I linked too, advise strongly against any oil-based lubricant. And the typical usage for materials like that make automotive applications look like a holiday!

I put a squirt of oil in the top when fitting.