In case you come onto this thread from a historical search perspective, I’m going to attempt to summarize the over 175 replies. Here goes.
1. The J.30 Spare Parts Catalogue calls them Hub Caps. P/N C.1102 and C.1103.
2. Modern replicas (knockoff knockoffs!!!) are reputed to be functional but the font of the word Jaguar and the arrow for the loosen direction is not an exact match to the original. The raised markings on the inside of the hub are missing. AB is the original vendor. 1466 and 1467 are vendor part numbers.
3. Most restoration advice suggested that the originals be rechromed by a reputable chrome shop. My personal advice is to include rubber plugs to seal off the internal threads from chrome buildup. McMaster P/N 9545K137.
4. A wide ranging discussion, frankly 90% of the thread, ensued as to whether the word Jaguar was painted black. I would say there was compelling evidence submitted, mostly period photographs, supporting both cases, at least for the Series 1 cars. It was agreed that starting with the earless cap (a change associated with other US DOT requirements circa 1968), the word Jaguar was definately painted black. For the Series 1 cars, again, there were both photos and testimony from original owners supporting both painted and not painted. In my humble opinion,to date, no one has submitted what I would call irrefutable evidence to support either position.

For the sake of originality on my 1963 FHC project, I am looking into restoring my knockoffs. First, some things I know. I think it is generally understood that the reproductions have a slight flaw to the font of the word Jaguar. The most obvious difference is that the R on the originals is very “stunted” for lack of a better word. Here is a picture of 1 of the 8 knockoffs I have on hand that appear to be original. Can someone confirm these are the “real deal”? 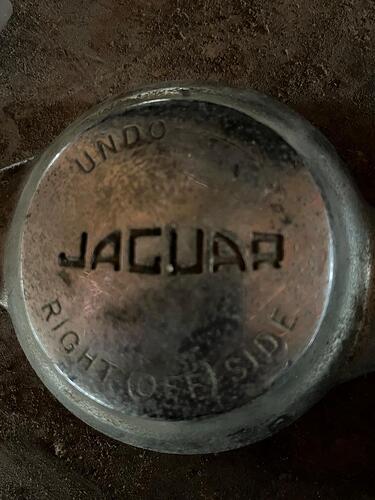 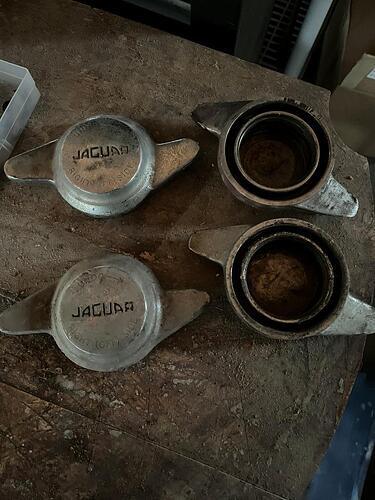 Second, it appears that the originals have text and numbers on the inside. Raised text, not stamping. The ones I have show 1466 or 1467, LH or RH, and AB. Haddock/Mueller on page 248 seems to corroborate this. The reproductions I have are embossed Made In England but there are no numbers. 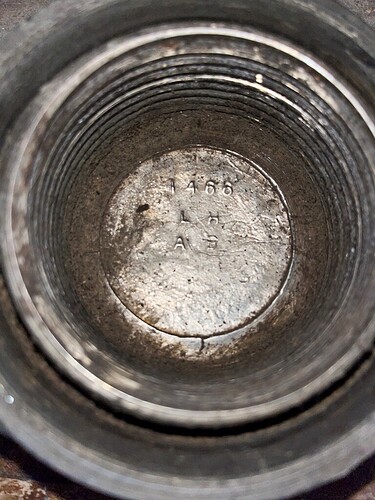 At first I thought 1466 and 1467 were dates, kind of like as used on tires. But now I think they are simply a part number, as for the eight I have, all the LH ones are 1466 and all the RH ones I have are 1467. So, thinking they were part numbers, I went to the SPC J.30 to gain confirmation. If you had to guess, would you think the SPC calls them knockoffs, spinners, or hubcaps? This might earn you some money at the pub because the correct answer is hubcaps! WTF? See Plate 21, Item 29. The P/Ns are C.1102 and C.1103. Confused yet?

Anyway, so much for questions of originality. I contacted my standard chrome plater, Pauls in PA. They agreed that they can shape up the mangled ears. They also have “a guy” who does nothing but etch out lettering, etc. so that after the chrome plating process, the lettering is still crisp and legible. He is apparently slow but does very good work!

I picked out 2 lefts and 2 rights and test fit them on my IRS hubs. They spun on freely. After a discussion with Pauls, I have procured rubber plugs from McMaster. I am going to use these to seal off the internal threads and lettering from the chrome plating process. They asked for a ½” drain hole in the plug so the chemicals don’t get trapped in there. Tidbit- they will solder a heavy wire to the inside of the knockoff, in order to get good electrical conductivity and without having any external points of contact that might mar the chrome on the important surfaces. None of this comes cheap or quick. Modifying the old joke about do you want it quick, cheap, or done right, I only get to pick “done right”.

So I do have a question? I believe the Jaguar text was painted black. Anyone have any advice on how to do this? I would be worried about paint adhesion to the chrome. I assume I can brush some paint into the recessed lettering and then wipe it off the flush outer surface using a sponge? Will enamel paint suffice?

Everything I have been able to find on the hub caps can be found here:
https://forum.etypeuk.com/viewtopic.php?p=36206#p36206

As regards whether the engraving was originally black enamel I am still not sure. I did believe the caps on the S1 cars were not painted and they were first seen like that on the S2 cars. However I found a photo of a cap on an early unmolested S1 and it had traces of black paint on it. However several Factory photos show no evidence of paint.

On the balance of probability I woukd say the engravings were not black filled until 1968. I will do some more digging and see what I come up with. Problem is back in the day an owner or selling dealer might order a new set to freshen up the car and after 1968 they would have arrived with black paint.

If you want to paint them use Humberol enamel as used on model airplane etc kits.

As the numbers on the inside are raised that indicates to me that they would be a p/n rather than a date. It would mean altering the molds everyday to change out the numbers.

David, the lack of black paint is a fascinating point that I was not aware of. I look forward to any continued research you undertake.

Robin, that makes good sense. I have to agree with your logic.

The caps were made using drop forging, a fairly brutal process which used a massive hammer to smash the bronze into a die. The dies needed to be, understandably, fairly resilient so changing codes or adding dates would be time consuming, expensive and of little value. Albion Brockhouse still have the original dies but restarting production would be expensive and require minimum orders in the thousands. With repro’s being offered for buttons there is no business incentive.

As Harvey has found out originals are readily available (used on the saloons as well as the sports) and can be refurbished, but at a high price. Worth while IMHO.

Hi Harvey - been awhile since we last talked.
As far as I know, mine are original from my ‘67 S1. Mine do not have any black paint inside the lettering.
In fact, if you look closely you can see some of the chrome inside the lettering is flaking off.
What is confusing to me is the RIGHT SIDE knockoff is labeled on the inside as 1466 L H A B, and the LEFT SIDE knockoff is labeled 1467 R H A B. Does this make any sense??? 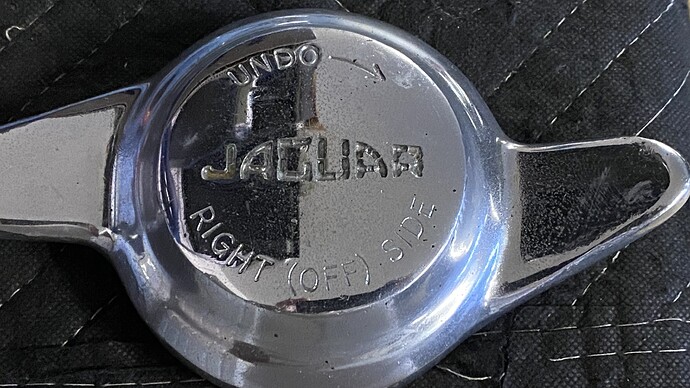 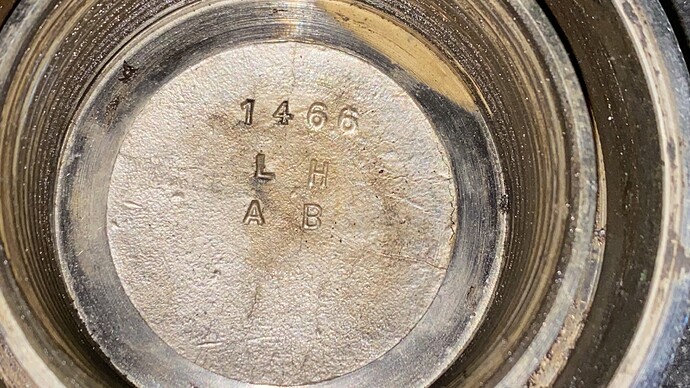 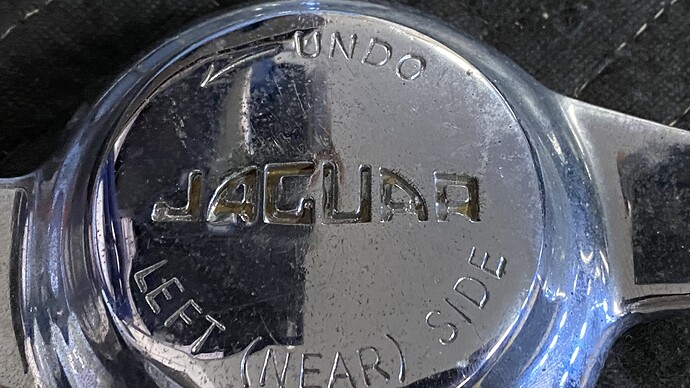 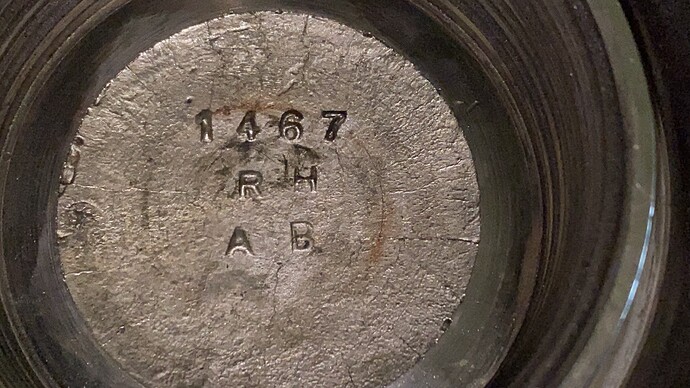 That sounds reasonable … thanks.

That makes sense; an easy check point for the guy feeding the freshly minted knockoffs into the threading machine.

This is the biggest difference to my eye. The G and U are square instead of getting wide and narrow again 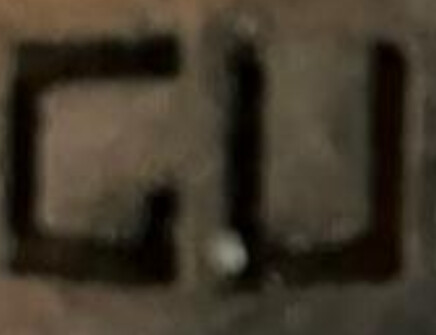 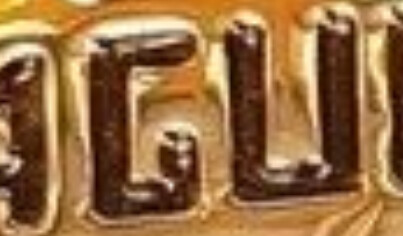 My friend @robrien24 pointed out that it looks like the original Jaguar lettering was stylized to fit into an ellipse. I can see it.

Correct. The Jaguar logo can be seen on the nose of the D-Type amongst othrrs and it is eliptical whereas the repro’s are flat at the base along with other failings.

Easiest test is to use the oil filler cap as a guide to compare with the hubs. You will instantly see the difference between original and repro. As Erica says, the U is squished on repro’s. 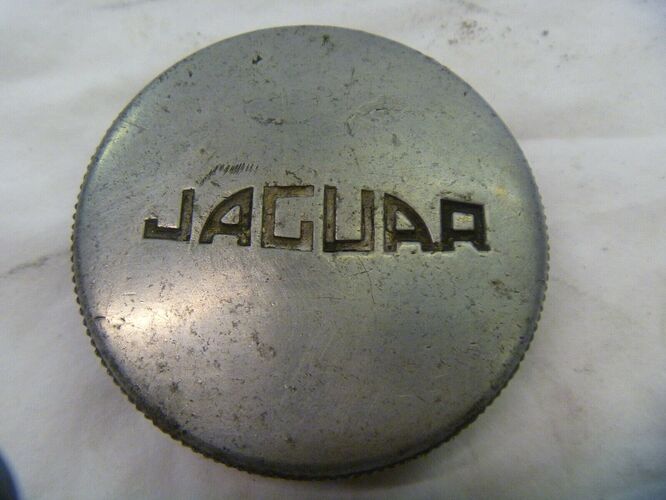 And the top of the G is longer than the repros.

The caps were made using drop forging, a fairly brutal process which used a massive hammer to smash the bronze into a die. The dies needed to be, understandably, fairly resilient so changing codes or adding dates would be time consuming, expensive and of little value

can’t find an emoji with hands over ear 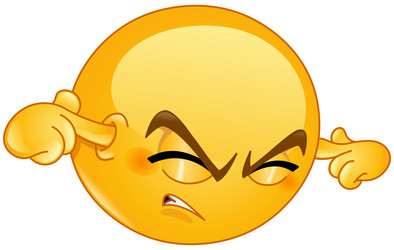 That one would fit perfectly.

Just as a point if reference: I had my original, beat-up knock-offs rechromed by Mara Polishing & Plating in Newark, NJ at a cost of $85 each and was very happy with the results. 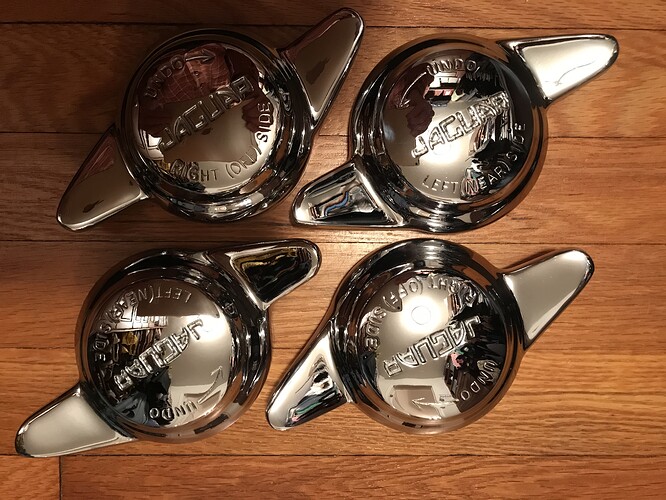 I prefer to let them age gracefully 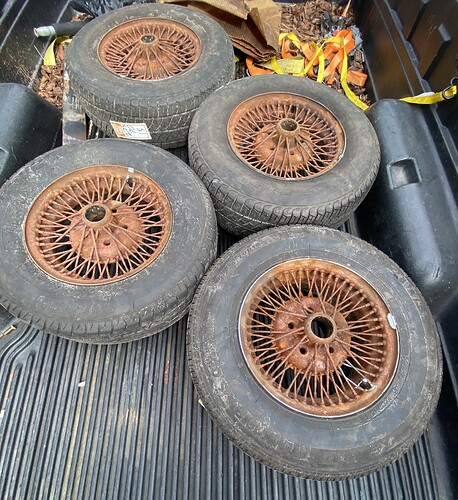 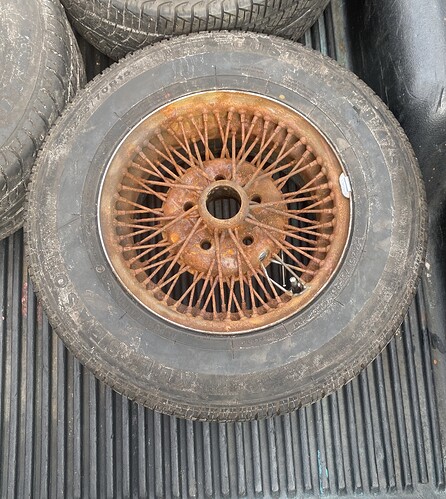