I have a machinery shed which housed our central vacuum system and my compressor.
There has always been water in the system.
I have a water separator with particle filter that doesn’t seem t do anything.
Every time I open the drain there is water in it.
Not only that but water is making it’s way through the hose reel into the tools.
I have been doing a bit of research.
I read that I need a minimum of 20 feet separating the compressor from the outlet.
That is of course impossible but someone suggested using an air conditioner condenser.
Has anyone tried that and how did you go about assembling it in the system.
Did you use a cooling fan and how did you wire it up?
I’m thinking of mounting it relatively flat, is that a problem?
This is an experiment so I can’t afford to just waltz in to the dealer and order it.
Any easy suggestions on the easiest way to find one?

My spray painting compressor always developed a load of water particularly in humid conditions. I used a Volvo truck AC condenser to cool the air so that the water coming out could cool and then be filtered out as fine droplets. The condenser I used has 23 metres of 8 mm copper tube for the air to cool through. Takes up very little room, not complicated and very effective.

You will have condensation in every compressor. This is how the physics works. For the same reason - you have a drain in air tank to be used on regular basis.
Good water separator will work, however good one will be expensive. You also need to drain it (good morning!)
The thing you need for effective moisture removal is “compressed air dryer” - pricey.
An alternative is a bucket of molecular sieve…

To answer the supply of materials… the truck condenser came from a truck wrecker. At the end of this you can fit a drain tank and a filter. I use a self draining filter that dumps the water when the pressure drops overnight. I tried various filters and separators but the AC condenser worked the best for me. You can fit a fan behind it to make it work even more efficiently.
My drain tank was a spare compressor tank I had but this is overkill just to give me a higher volume when spray painting.
When I’m home next in a few days I’ll photograph my st up if you want. Very cheap to set up.

I would love to see it.
The primary issue is I’m totally broke, so I can’t afford a dryer.
I don’t mind draining the tank every day, but the water still gets into the hose.
For the past few years I’ve been using a compressor with a horizontal tank.
It was not easy to drain and I didn’t trust that it was level.
Last week I bought a used compressor with a larger vertical tank.
When I got it home I found it had massive internal rust and a broken head bolt.
This morning, I stopped at a garage sale and found another with a vertical tank.
I’m getting to the point I could have bought the compressor new that I really want.

Sorry to beat a dead horse, but here is where I currently stand.
After weeks of fabrication, fudging and de-leaking, I installed my 5 HP, 30 gal. oil-less compressor in my equipment shed.
I also installed an automatic drain that appears to be dripping wet after starting.
However, I’m still getting water out of the hose, into the tools.
What I was thinking lately is installing a chiller inline, between the pump and the tank.
I have several of them between 1K and 1500BTU, that are capable of freezing water.
Obviously, I don’t want to do that.
The questions I have are what temperature should I set it at?
Should it be located above or below the compressor.
Would I want to install the auto-drain at the chiller outlet?

Equi,
I think you’re over-thinking this subject. You’ll need two moisture traps and one spare 10m air hose. Your compressor has bleeding port for a reason - use it on regular basis.
In terms of airline moisture - install one moisture trap on the quick connect straight after the compressor’s outlet. Take 10m hose and wrap around your compressor (you can do 20m if you have spare) in the lowest section. Attach another moisture trap above your wrwpped hose - example of 2-stage trap below: 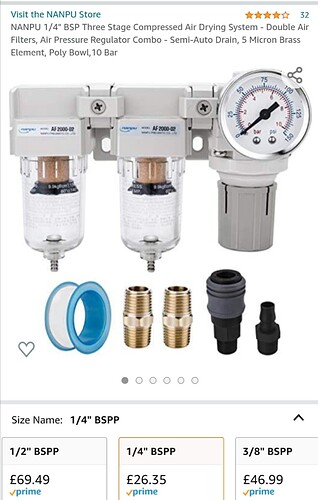 Screenshot_20210617_0818021080×1695 189 KB
Attach your power tools to the second moisture trap and you’re done.
If you are really advanced and using your air compressor for lab and XRF testing, chemical processing, dark experiments - you can always use a water filter enclosure (8bar rated) with something called “molecular sieve” but you will have to regenerate (bake) it consistently.
equiprx (equiprx) June 19, 2021, 12:42am #8

I had two air and particle separators and regularly used the drain valve.
Water still came out the hose reel into tools.
The pump outlet temp is 250F and I think cooling is the answer.
I just need to know what temp to shoot for and preferred placement.

had two air and particle separator

What about a reel of fixed hose between them? These are simple physics. Forget about cooler heater freezer and turntable. It won’t work unless you’ll purchase industrial grade desiccator which will take more space than your XJS itself. At least for your needs… Air power tools are designed to take some water - hence the tool called ‘airline lubricator’.
Another thing contributing to your problem - may be the air hose internal diameter…

I use a deep "U’ as a separator. A petcock at the belly. Drain tank and “U” from time to time. Plus a small dryer,

Some pro’s use a disposable filter/dryer downstream. Close to the tool. usually paint spray…

I drain the tank at least daily.
The automatic HF drain doesn’t seem to do a very good enough job.
I always get water out of the system, even after seeing water from the auto.
Would a 3/8 NPT ‘U’ be sufficient, between the tank outlet and the hose reel?
Specifically, what type of dryer and where?

I would think not. The air flow would blow the moisture right through it. I think what you need is something fairly large, could even be a container, so that moisture collects in the bottom while you take your air feed out the top.

Dumb idea: Might be a container within a bucket, and before use dump a bunch of ice in the bucket. That’d ensure any water vapor in the air would condense out within the container.

Another idea, I suppose, might be a “dirt leg” – although in this case it’d be a moisture leg. Line going straight down into a T. A line continues downward from the T for a short ways to a dead end. Another line comes off the side to go to your tools. Moisture goes straight down into the dead end while air makes the turn to the tools. Every now and then open a valve at the bottom of the dead end to drain the moisture out.

If your compressor is barely meeting CFM of your tools - you will always have water in your air system.

If you’re located in humid area - you will always have water in your airline (where are you based?)

Moisture drops out due to air compression - compressed air cannot hold as much moisture as ambient air (just in case mentioning as you know this already), also on cool down…