Alloy XK120 on BaT in Illinois 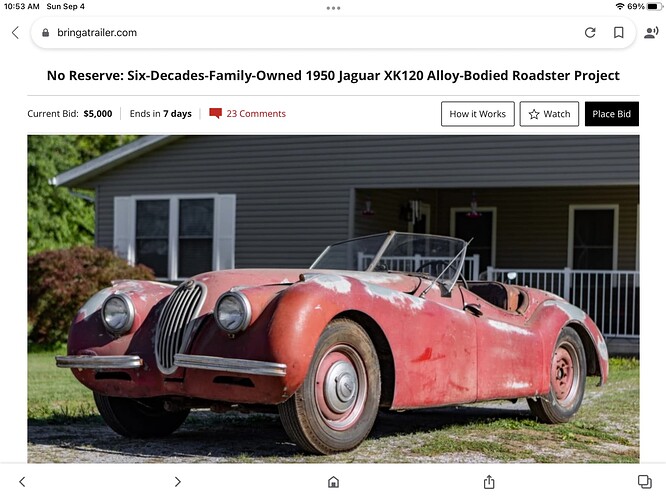 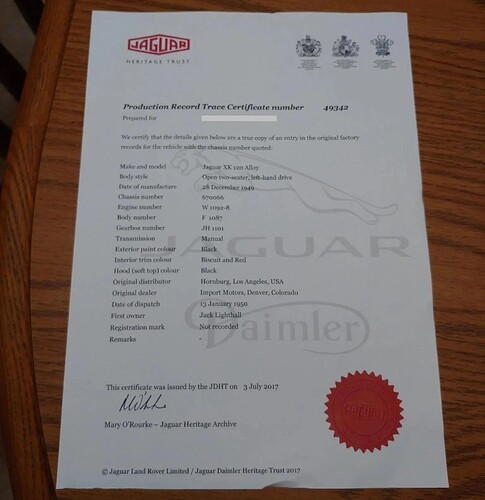 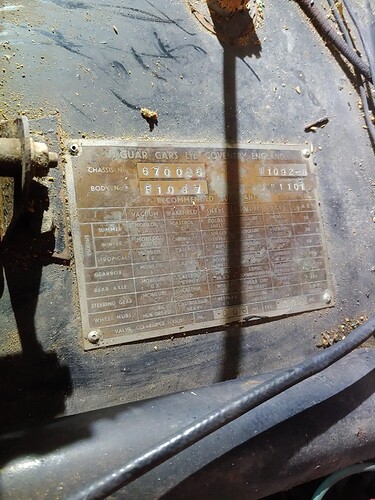 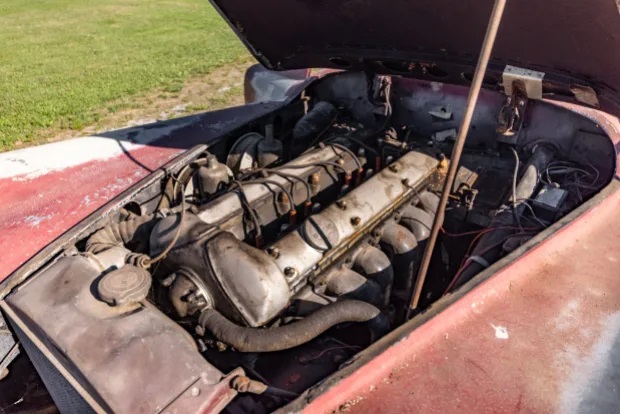 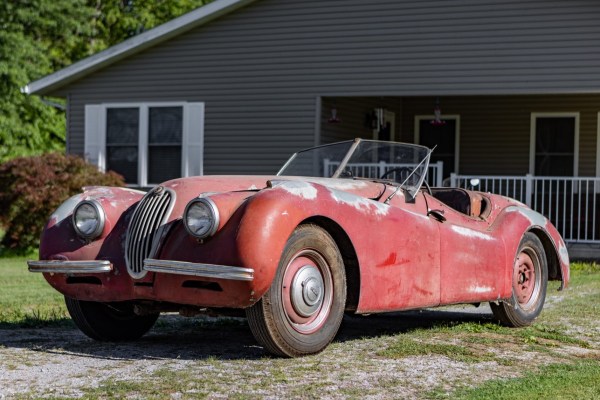 Bid for the chance to own a No Reserve: Six-Decades-Family-Owned 1950 Jaguar XK120 Alloy-Bodied Roadster Project at auction with Bring a Trailer, the home of the best vintage and classic cars online. Lot #84,129.

It’s always interesting to look at these original (sometimes even untouched") examples and I always learn a lot from these.

This time two lessons:
We recently had a discussion on the Rear Number Plate Panels used on the XK 120. This very early XK 120 with chassis No 670066 has the early Rear Nuber Plate Panel C.2941 for the US and Canadian market. Apart from the different way it was held on the Boot Lid (4 screws through the Panel and Boot Lid) we also see now that it had an additional hole located where the Reverse/Number plate light cable goes through the Boot Lid. This is now much more in line with the “other” early version C.2946 (Europe and other countries) that had the same hole but a number of extra holes at the sides. See pictures from BaT and Urs Schmid: top is C 2941 and bottom is C.2946. I will update my document.

Some may remember that I once wrote a story on the early Jaguar pressurized Radiator Caps and also referred to the history of these caps as developed for the WW2 Jeep and the fact that this cap was made by various US companies including the Stant. This XK120 # 670066 has a replacement radiator cap made by Stant. Whereas the first original “US army” versions were round (just like the early RB5 versions made by AC UK), this later (Sixties?) Stant R7 version has “ears”. 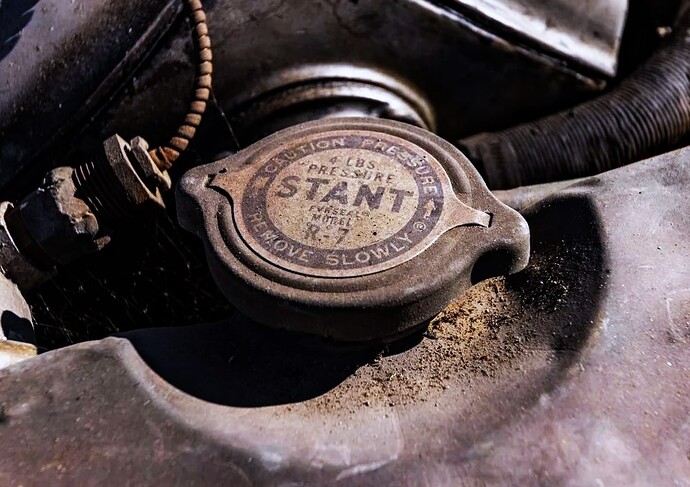 There is another car claiming the chassis number “670066” in the UK. Registered LXS 129, it appears to be fully restored.

Indeed, I see the comments on BaT are getting interesting. The car for sale seems to have Terry McGrath’s endorsement or the lube plate mounting at least. The owner of LXS129 will be unhappy.

Bob, I thought you might notice that rear number plate.
I also noticed the small rear view mirror is the same as my Nov '51 FHC has.
I’ve also wondered about rad caps with ears because mine came to me wearing one. 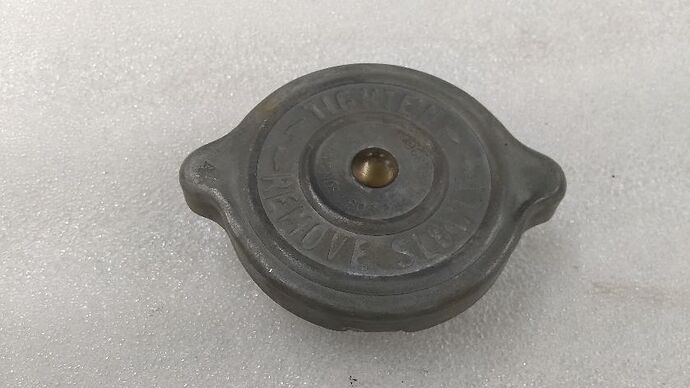 The “other” 670066 could be simply entered with a wrong digit. Someone in the UK should get in touch with him and straighten it out.

two different carb body uppers, some kind of big tube into firewall, a brace of sheet metal for the bonnet hinge, odd angle of the front bumpers…interesting is it says 200 miles driven by current owner !! bid at $77.5 !

With five days to go…

I wonder what happened to the car previously claiming to be 670066, possibly a typo but can’t be found anywhere on xkdata now. All photos of this car have been uploaded now.

I believe there were more pics of LXS129 on XKData yesterday. Now just one pic uploaded 2019 and several comments presumably by the owner.

Certainly almost all pics and quite a bit of information detailing the car on BaT now dominate the page. 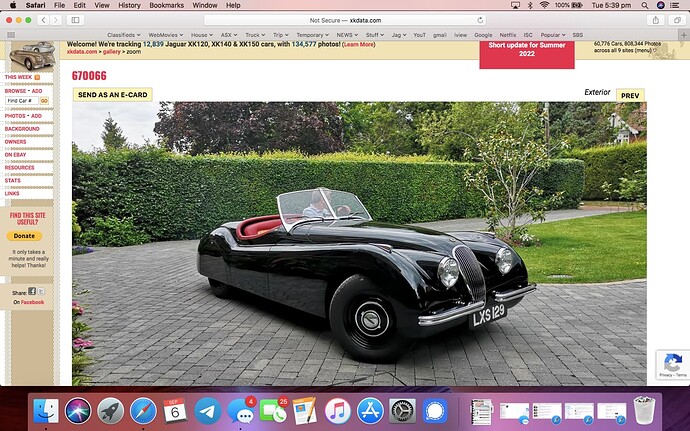 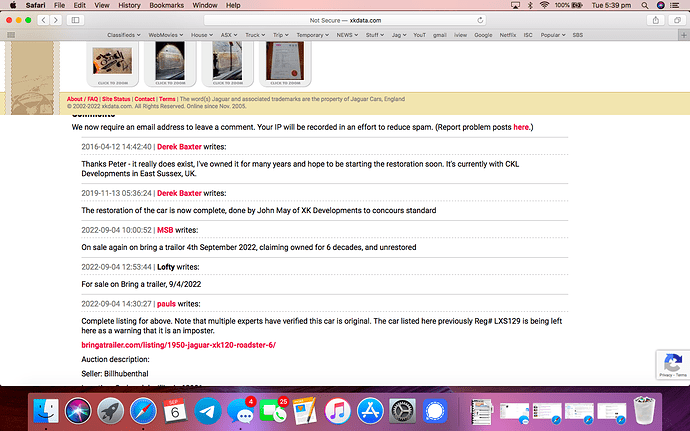 Bit cheeky to say they are leaving the previous car as a warning it is a fake. What if it was a typo by the owner. There was never a photo of the previous cars id plate, pity because that would have answered all questions. Possibly Terry McGrath knows more?

Yes, I wondered about that myself.

I suppose if in fact a mistake did occur the restored car’s owner now has a motivation to correct the records and provide some information.

I personally don’t have any knowledge of intentional cloning but the way a few folk speak of it it would appear to be a real issue. The XKData page for 660001 makes for interesting and even comical reading.

It’s brutality to call it an impostor. Possibly this is just a typo (at least until proven otherwise).

Yes, let’s take the Christian charitable view and wait to see more. The UK owner said he has owned LXS129 for many years and it was restored by a reputable shop. If it is a genuine alloy, there seems to be no reason to make it an impostor/clone.

Clausager in his book just says 670066 “exists” without any other explanation.

Data on XKdata is entered by anyone, so mistakes are not unknown. If a genuine mistake is found, the webmasters are willing to correct it. But they do not delete arguments over provenance.

Unfortunately I will always go for what I know will be the case the UK car will be not a mistyping of chassis number.
There have been to many fabrications of alloys in the UK
The targets are cars with no recorded histories.
I have been collecting histories and photos on alloy cars for 45 years and have some 15,000 photos I had not a single piece of info on 670066 until a week ago yes I have all of its original factory info but it has not come to life until it appeared on BAT and hey presto we already have one!
I am making inquiries into the UK car to see what I determine on its history.
But the last car that was built up in the UK a single digit LHD car I tried to view in England I travel from London to the USA and the same single digit alloy car total original down to body number etched on back of alloy door pockets is found in Illinois.
Lets see what the future holds!
GOV.UK - Display Vehicle (vehicleenquiry.service.gov.uk)

Wow, that is really a pity that this things happen. I think -nevertheless- that until proven otherwise, I always try to be careful with such statements in the www-net.

Maybe I’m naiive, and no doubt Terry will put me right, but would there not be a number stamped on the ‘imposter’s’ chassis?

Maybe not yet answerable, but… is it, or ain’t it?

would there not be a number stamped

Yes in most cases, but I have come across several on which the chassis was so rusted the number couldn’t be determined.

I was involved, along with Jim Kakuska, with identifying the unrestored field find 670008 he had pulled out of a Michigan orchard, on which the the ID plate was gone and the original master cylinder bracket had been cut off and a different cylinder mounted.
We used a wire brush and oil and were able to make out portions of the number on the front cross member, enough so we could be sure by elimination that it could not be any other number.

The “other” 670066 could be simply entered with a wrong digit. Someone in the UK should get in touch with him and straighten it out.