94 XJS V12, Conv-US spec. I realize that all 4 belts must be removed, and the official Jaguar repair manual says start with “remove set screws on top section of fan cowl”. By doing so, it doesn’t really allow access to remove the fan, which must be done in order to fit the new belts. There appears to be 4 nuts on studs set into the fan belt pulley that attach the fan and “torquatrol” to the pulley. Does anyone know IF these 4 nuts are removed, can the fan unit be moved forward so that belts can pass by the pulley?
Wayne

To answer your question, yes, removing the four nuts permits the fan to move forward – but whether it moves far enough depends on how far it clears the radiator by.

I’m not entirely sure you can’t replace all the belts without removing the fan, by sliding them over one blade at a time.

But I do want to ask: Why are you replacing the belt?

I’d like to mention two issues of note. First, that alt belt is a ribbed belt, and they have a fundamental problem that the belt tends to ride on the points between the grooves rather than wedging down into the grooves. This causes the belt to slip something awful, sometimes silently. You can tell because the tips of the ridges on the pulleys get very shiny. I always recommend that, whenever you get a chance, file down the tops of those ridges – especially on smaller diameter pulleys such as the one on the alt. If you had the alt out, the easy way to do this is to chuck up a socket in a drill and use it to spin the alt while you hold a file against the tops of those ridges. Take off a lot. You can safely take those ridges down to half their original height. The more you take off, the longer it’ll be before the belt wears the grooves down to needing that fix again.

Second, note that the XJS convertible is notorious for crank damper failures which result in failure to drive the alternator properly resulting in charging issues. The classic symptom is squealing when trying to raise or lower the convertible top right after starting the car, but sometimes the slippage is silent. It’s easy to check for a failed damper: Apply some alignment marks between the hub and the rim with some Liquid Paper, then run the car including running the top up and down to load up the alt, then check to see if the marks still align. If not, new damper time.

I prefer to do the Alt belt from the bottom. FWIW. No mechanical fan on my car so can’t comment on that.

Second, note that the XJS convertible is notorious for crank damper failures which result in failure to drive the alternator properly resulting in charging issues. 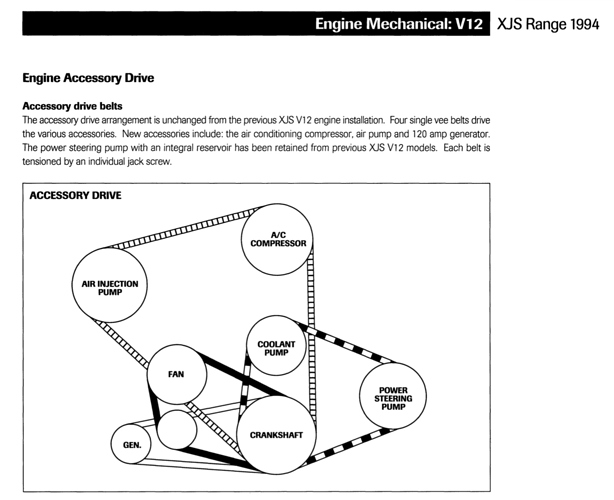 Thanks ALL for your input. I did have to push the mechanical fan forward enough by removing the 4 nuts attached to the fan pulley stud. And now I am able to replace all 4 old belts, which show wear/cracking and may be the originals. regards- Wayne