I noticed my volt gauge was at around 13 volts and then going down to 10 volts and then back to 13 volts that last few times driving the car. I thought maybe the alternator was going bad, but the engine was turning over fine. I heard an unusual noise coming from the engine compartment when I parked the car in the garage, and then it went away. The battery light came on while the engine was idling. I shut the engine off and noticed the alternator belt was broken. I did a search and read some of the old posts on replacing the alternator belt, it sounds like a lot of work. I’m going to replace all of the belts since they all need to be removed to change the alternator belt and they’re probably original. If there are any helpful tips I would appreciate it to save me some time and work. My car is in an unheated garage, so I’ll probably be doing this in the driveway unfortunately. I was going to wait until the weather warms up, but I don’t want to wait until spring if I can help it. The belts are arriving tomorrow, so I thought I’d get a head start and start taking the old ones off today weather pending.

Can’t recall how mine were. But, generally, I offer:

Thanks Carl, those are some good tips. Number 5 was a good one and smart thinking!

No clue on how to get the sizes, but all tips are good - the fan will come out with the shroud in place but it is annoying especially with cold fingers. Maybe you can get around the thing. I think!
Definitely keep old as spares…

Thanks David, I worked on it a little today but I didn’t get very far. I’m going to try and get the belts around the fan as you mentioned. I think I ordered the right sizes, but I will see when I get them. I’ll try to get the belts off intact, cutting them would be a last resort.

Unfortuantely, the alternator belt is the belt closest to the engine; meaning that belt will be the last of the 3 (if a Federal Car fitted with Air Con & an air pump) belts to come off.
The order of operation.

If you need a diagram, let me know I’ll fetch one.

I’ll try to get the belts off intact, cutting them would be a last resort.

**
Indeed it should be - destructive dismantling is not to be encouraged…

Removing the old belts intact is a good preparation for refitting - giving you practice in the reverse operation of fitting and adjusting new belts. With the added bonus that if you have the wrong replacements; you can get back on the road without time lapse - and later have spares…

Thanks Mark, that information was really helpful and the part #'s. I did order Dayco belts from RockAuto and received them yesterday. I’m glad you mentioned the bolt on the power steering pump under the reservoir. I loosened the adjustment nuts for the pump and the pump wasn’t moving, that explains why. I may attempt to work on it today, weather pending. Hopefully the job won’t be as bad as it sounds,lol.

Thanks Frank, those are some good points. If I have a wrong belt, I could use the old ones in a pinch.

the power steering pump is pretty much a bitch very little room & fine threads. under the pump resevior, there’s a nut, the mount isn’t tapped

Hi Mark do you access that nut from underneath the car? It kind of looks that way.

You can or I used a series of long extensions and a universal joint between the extensions. Once you crack it loose a bit it you should be golden.

I will run out to the garage and take a peek get back shortly.

Ok something to keep in mind there is a bracket that attaches to the block that holds the bracket for the power steering pump. Here is a parts view that may help on getting the right nut. Two of the three nuts on the back of the pump are to hold the pump
on the bracket. Not to point out the obvious, leave those two alone. Use the bolt on the front as a point of reference as to where the nut is located. 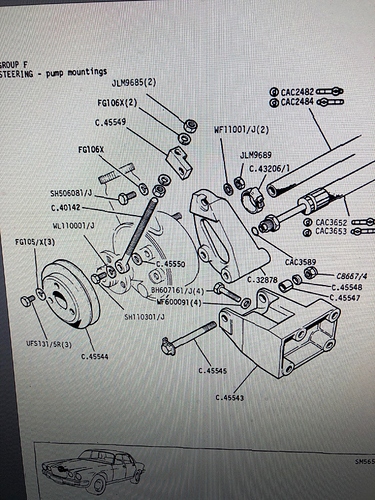 Thanks Mark, the long bolt C.45545 with the nut attached at the back of the pump was the one I was referring to. Thanks for the diagram also, that helps. I was going to work on it today, but it was to cold out and now it’s snowing. I’ll probably wait for warmer weather.

It is here too - cold. Miserable. I hate it. Would you by chance be in the Pacific Northwest?

I figured that was the bolt you were referring to. I think I tried to attack it from under the car, but had better luck from above snaking an extension around the distributor – if memory serves. It’s been a year or two since I’ve done
it.

Hi Mark, I live in a western suburb of Chicago. I hate the cold weather too, the older I get the more I dislike it. You’re in the Pacific Northwest I take it? I’ll loosen the nut from the top too as you suggested and it only needs to be loosened. Thanks a lot, I really appreciate all your help. This forum is a lifesaver.