Amazed at how few posts there are!

As nutty as many of us are, about bikes, there are not nearly as many posts here as I though there might be.

Imagine that… I finally made a mistake by May. I blame it on the Covid.

Personally, its been a long time since I owned one, my memories are clouded from age and health, my DD was two-wheeled for a number of poor years, winter in NJ far from ideal riding conditions especially on ice, snow if deep enough you could always lay the bike down to decrease the stopping distance, but had to mindful that getting the bike up with hot pipes was motivational when leg trapped beneath. On really cold days my outer layer was usually a large thick 55 gallon garbage bag, cut the wind exposure down, also cheap since I usually found one from the maintenance crew of my employer at the time. A couple of bad spills, dead animals, bent forks, seeing my bones, quelled my enthusiasm.

On really cold days my outer layer was usually a large thick 55 gallon garbage bag, cut the wind exposure down, also cheap since I usually found one from the maintenance crew of my employer at the time. A couple of bad spills, dead animals, bent forks, seeing my bones, quelled my enthusiasm.

Being a Colorado rider, I can relate!

My Damascus moment was holding a friend, as he bled to death. Wasn’t too long after that I rode my last street mile.

Mine started when I was 16, Lambretta ‘D’ very close in colour but sans white walls; I could feel the difference in air temp when transitioning from residential to rural on my rides home in the UK, especially on the knees! Dropped it once when entering a large round-about, saw this slick of something on the road surface, once committed there wasn’t a low of wiggle room to change direction, next thing I’m sitting on the grass verg still it was fun. 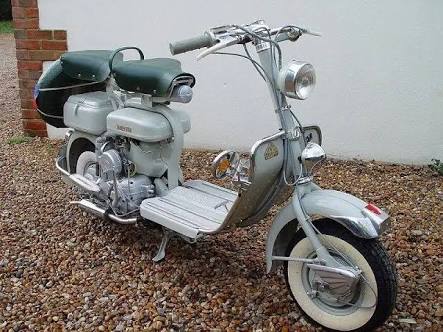 Next one was a 350 of some description I seem to recall it was a Suzuki purchased it with one coil not working so every where I went it was a case of wide open throttle. I change the duff coil out at work one lunch time, fired it up and thought ‘Yeh thats cured that’ and went back to work. Left work and thankfully I was upright and pointing down the road when I did the normal ‘open the throttle’ didn’t wheel stand (it was a heavy bike) but I slid back on the seat which of course meant that my wrist was not in a position to unwind very easily. Didn’t fall off that time but later going to work slow speed front wheel lock up and fall off. Kids were <> 2 and 3 at the time so I thought time to get back into 4 wheels.

I like your story Robin, and the reasoning why your two wheeled adventures were kept at bay.

Yeh the ‘kids’ are now 44 and 45 so a wise decision long term methinks.

BTW I continue to follow the big bike F1-like series. I still am amazed that they can run a race with the abuse the tires take. Side note. First tire change first bike, Dad looked at wear and told me I was riding the bike incorrectly, next tire change worn bald all the way around, felt way better BTW, but had to change, Dad said much better.

one of my best motorcycle memories was in 1957 JUNE , the Laconia NH,1/8 mile drag race !
there was around 175/200 bikes there they run them off one at a time(narrow street woods on both sides). they had some electronic timing equipment set up!
i was with my boss a Harley Davidson dealer from Mass.
i spent most of the winter puting together a souped up 1950 Harley 74,(today it may be called a bobber).
i had know idea what i was supposed to do( my 1st time at an official drag race).
after the many Brit and other forign bikes had made runs, it came down to me and two guys had towed in from California, with two wicked lookin drag Harleys!
well they made ther runs one of them set fast of the day speed!
my boss said your up Ron(give it hell), i made 2mph faster than the other fast guy! WON fastest speed 90MPH in an 1/8, goin thru in second gear(Harleys aint supposed to do that)? I got throphy for fastest bike!
me and boss packed up are stuff,(he carried most with him on big bags),gonna leave for home, WHEN the two other guys walked over and said he got a bad start, and wanted to have a private street race on another flat straight place, 1/4 mile long,we followed them, we got there and DAMN musta been 15/20 bikers laughin,drinkin smokin, hangin round!
my boss went down track end one of there guys across the road!
OK well we dragged and i beat him again worst part,in front of all there friends!
at track end i’m slowin down and boss says ron keep going.,go home, those GUYS are part of HELLS ANGELS from california, and they are pissed off!
Ron

I hope your gas tank was almost full

I think bikes are the best fun to experience handling, acceleration, stopping, and the physics in weight and mass, time to lose weight(note to self). For the buck, much cheaper way to get to edge of all of the above

beach right on , at that time i raced NH. i weighed 130 lbs, and riding a motorcycle can really bring out the magic of YOURSELF!
how many times something bad ALMOST happened , but suddenly it didnt??
much respect for the Universe!!
ron

Id kinda forgotten about that!

Also sensible in the Rover, with its 2/40 air-conditioning…

I’d be lying if I said I don’t miss canyon carving in the Rockies.

I was 18 y/o and 130 lbs. in 1977. After riding dirt bike for six years got a 1977 XS650 Yamaha.
MX racing puts a premium on getting the holeshot.
Guy I worked with shot his mouth off to some 750 Honda tuners that I could take them light to light street racing.
With their big carbs, high rev cams, and open exhausts leaving very little bottom end they were quite embarrassed.