THIS COULD BE YOUR "GOLDEN OPPORTUNITY" To Finally Own one of JAGUARS Vintage Prod. RACING CARS !...

So much honesty! That and 100K of restoration costs with years of sweat equity and it might be worth 40K.

The biggest thing that bums me out about Mk2’s is that they just don’t seem to rise in value. I see some now and again for like 30-50k but they don’t seem to sell and otherwise they are pretty cheap to buy. I guess that’s good if you want to get into one but it makes it hard because they don’t justify the cost of restoration.

If this car is a 1962, why does it have the ‘later’ twin spoke steering wheel introduced after 1965? This car is RHD,and the ad claims it was owned ‘since new’ by PO. RHD would suggest the car spent some time in GB, which would suggest there may be more rust than the ad would indicate. There is no chance any profit could be made if one wished to purchase, restore, and resell this rust bucket.

I’ve just got. 61 mk2 and hope it brings me a few years of pleasure. 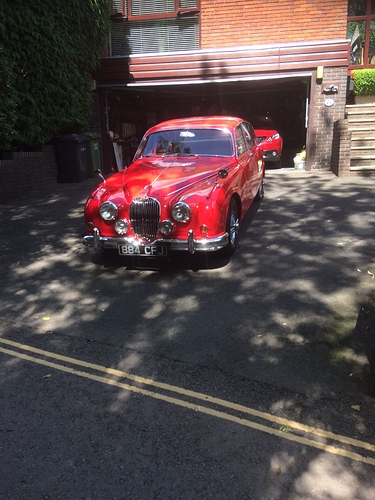 Rent a UHaul and come on over!