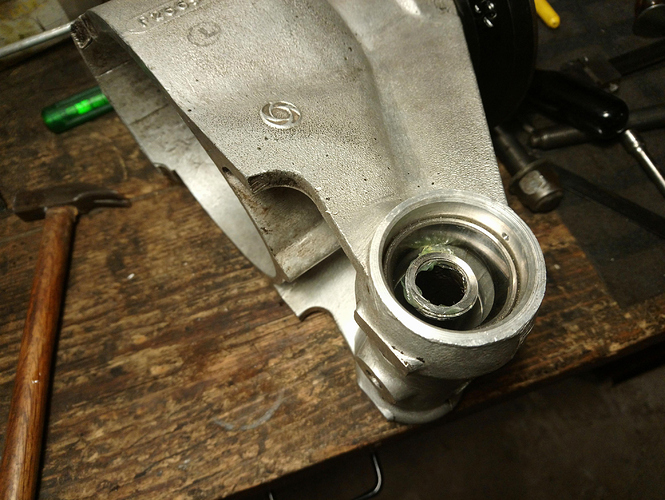 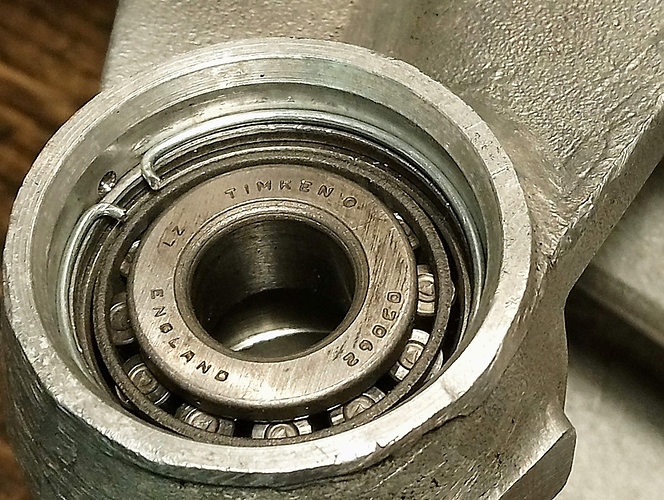 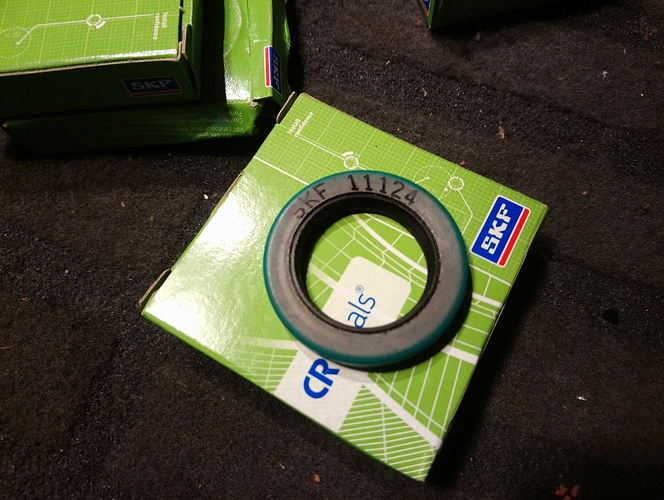 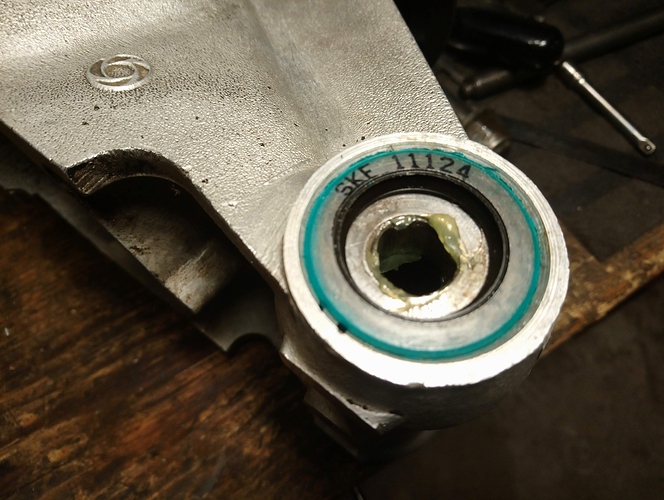 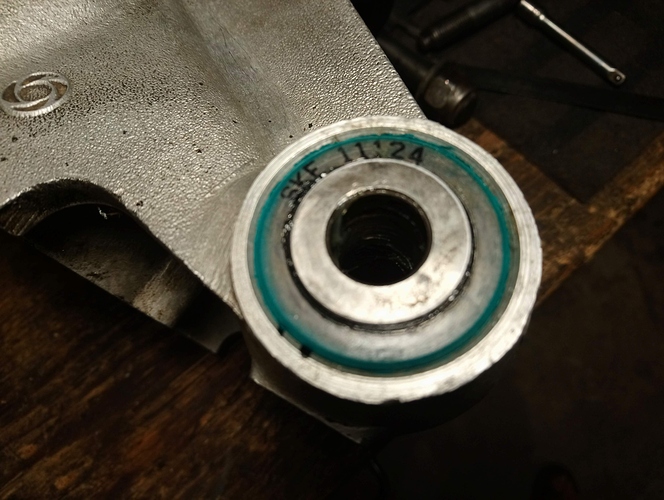 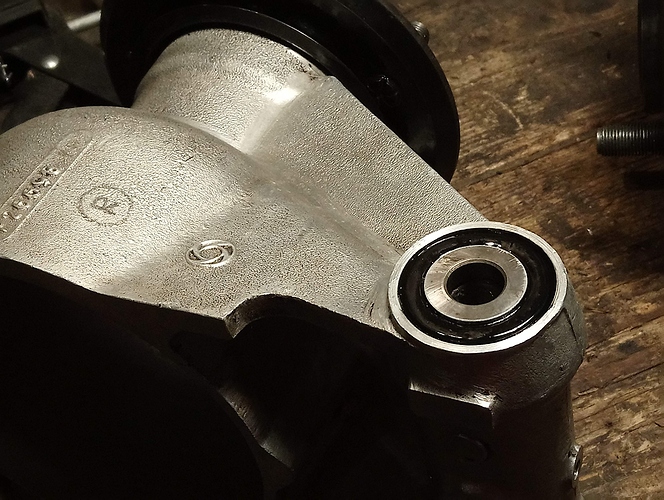 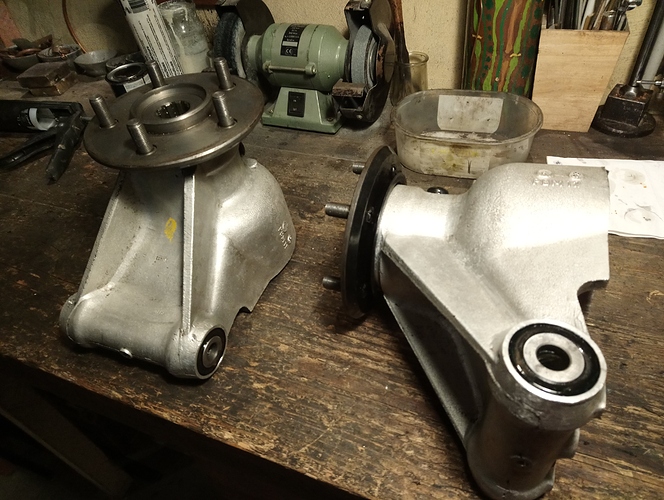 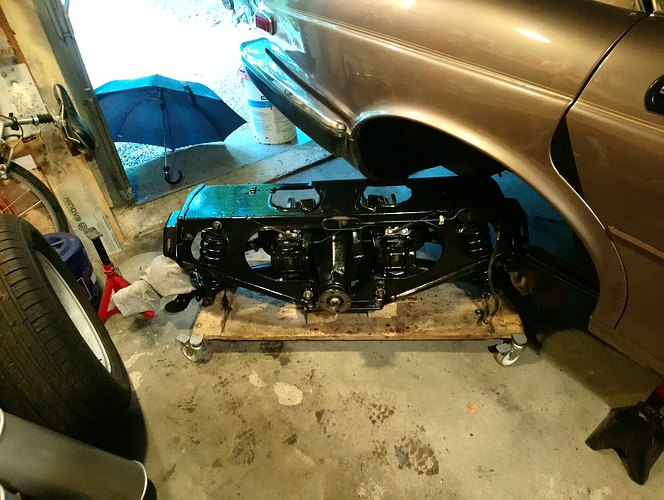 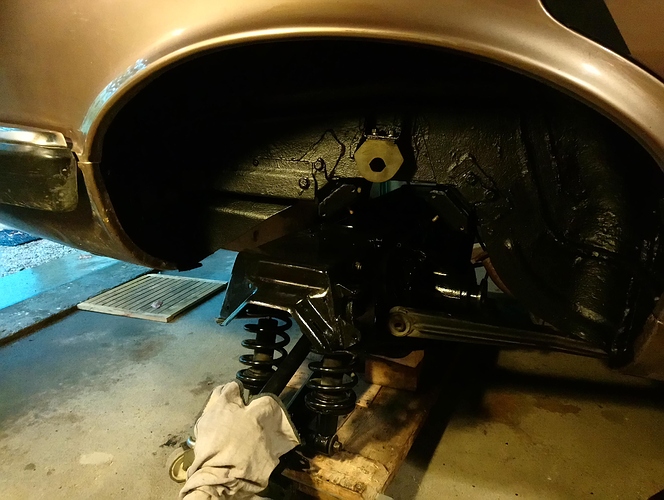 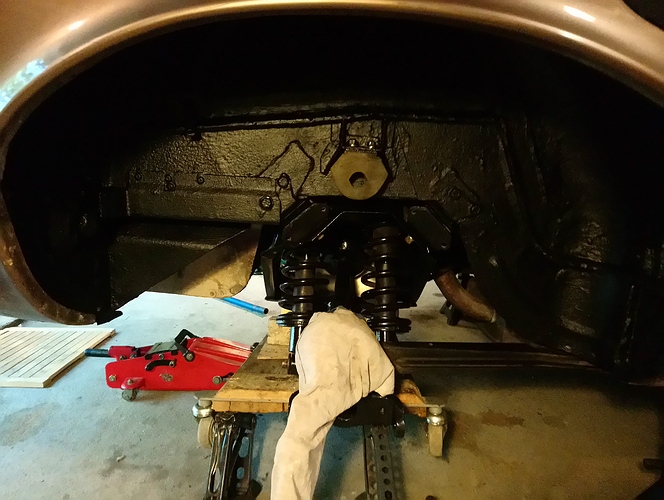 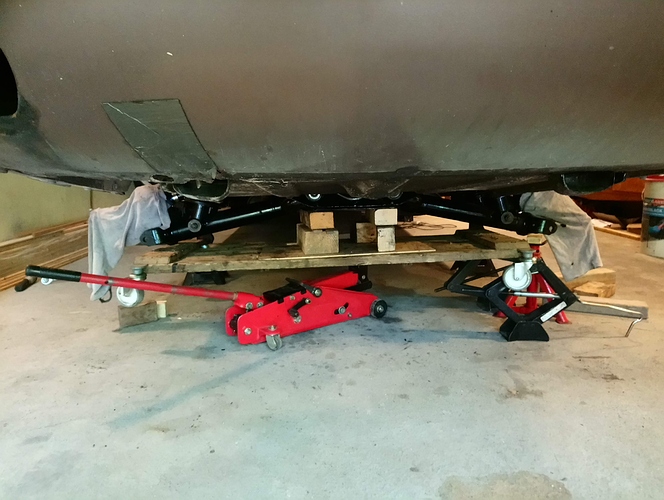 Ha ha haaaah…yes…I suspect that the photos have been “faked” and that the actual install has oil stains on the floor, empty beer bottles strewn about and some blood stains under the car…

Interesting…I don’t think it is actually brinelling …which is excessive local static loads which exceed the material elastic capacity…and are able to be felt as indentations in the bearing races…but rather “false brinelling” which is
“ …a bearing damage caused by fretting, with or without corrosion, that causes imprints that look similar to brinelling, but are caused by a different mechanism. False brinelling may occur in bearings which act under small oscillations or vibrations.”
I saw this on my rear bearIngs as well but was puzzled at the lack of detectable surface defects that normally accompanies actual brinelling…so left them alone…!!! Dammit…

Thank you for your comment on brinelling, indeed we all will have different opinions based on our experiences. Both brinelling and false brinelling are reason for bearing rejection and in any event I would suggest replacing these bearings.

My own experience contributed to my original comment, and from current evidence I still retain my original view. With this in mind I have added below a little to my initial comment, which may be of general interest.

As a formerly fairly high user of Timken bearings I kept very close liaison with Timken technical personnel whilst working on Military and Automotive problems across, and in, some 56 countries. This provided first-hand experience of the various taper bearing problems directly from the World’s leading maker of taper bearings.

In the Jaguar installation in question the rollers only partially rotate under frequent impact loads and cause this plastic “deformation due to extreme or repeated shock loads.” Timken list, show and advise that this is what they term Brinelling.

Initially the damage will be seen as dark shadowing but no undulations are felt. If bearings exhibiting this damage are not changed in the worse cases the bearing will suffer transverse cracking, in simple terms the track breaks. However, before that stage the worn undulation points will form a ratchet action and try to rotate the tracks in their housings (most readers will have witnessed bearing tracks loose). This damage can be expensive to rectify.

Now examine Timken’s comment on False Brinelling, “False Brinelling is recognizable by grooves worn into the raceways by axial movement of the rollers during transportation”
Note that this is a condition produced before the bearings are fitted according to Timken and I have witnessed that situation.

This False Brinelling is often mis-understood and from personal experience I know it can be a particular problem with extremely large bearings over 12 inch (300 mm) diameter. It can generally be prevented by careful and thoughtful packing.

Thank you gentlemen.
But credit is due to Ron Moore, Craig Sawyers and Kirby Palm.
I just substituted the suggested National 471652 single lip with the more suitable SKF CR11124 double lip seal.
All details are in the Book. 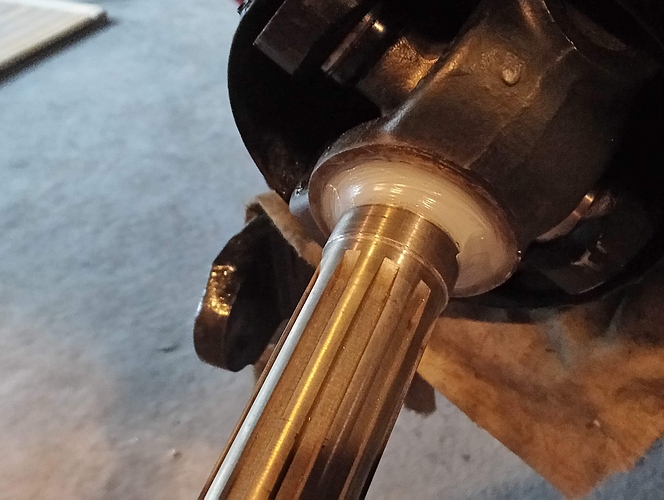 Sealant under the oil track. 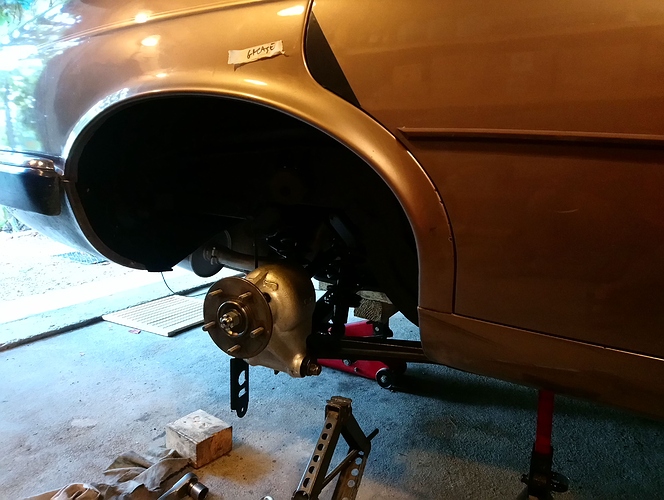 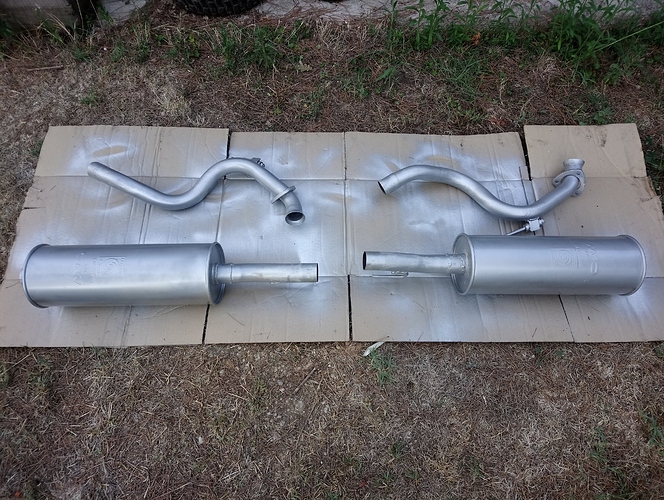 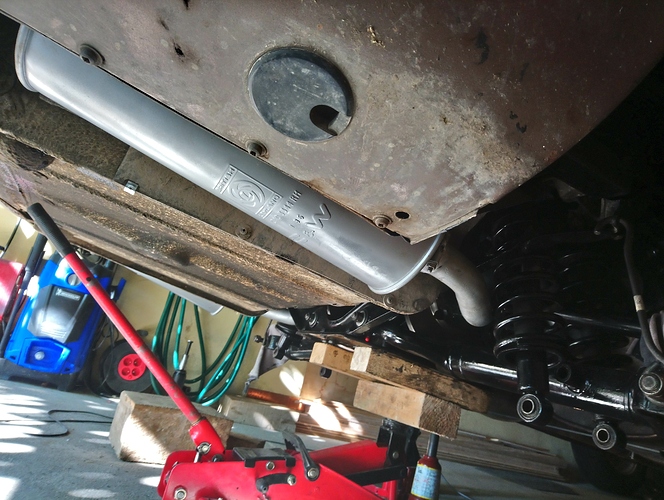 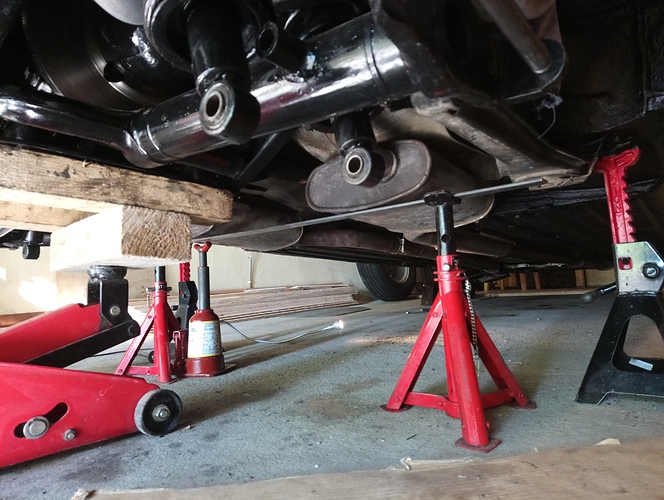 Someone was there before… again… Right rear silencer, with big RH marked on it, was on the Left side and LH on Right side… intermediate silencers were misaligned… and very well stuck together of course !
Firegum was used in all the joints. 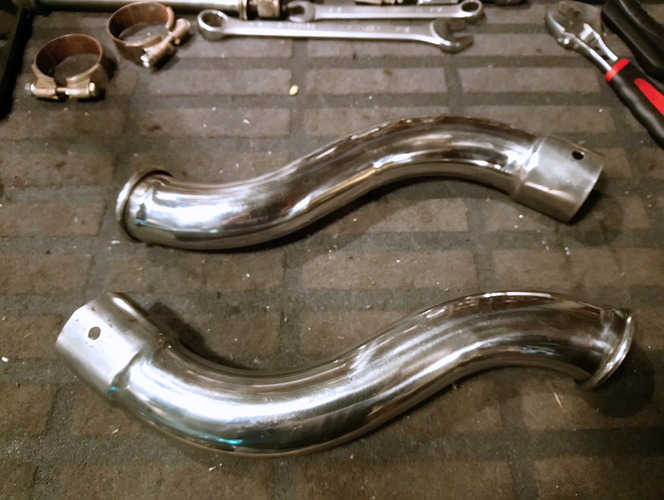 And polished tail pipes for a total bling effect !

Unfortunately I am still of the opinion that the pictures show “false brinelling”.
Brinelling is where the bearing surface has failed in compression due to an excessive static loading. The term derives from a hardness test Engineers can use to determine the surface hardness where a ball is pressed into a surface and the magnitude of the indentation can be used to assign a Brinell Hardness to the material. The material has entered the “post-elastic” zone and does not return to the original position. It is “indented”.
The bearings in the jag hub are not subject to any extreme shock loads …especially with regards to the axial capacity they possess…they spend their whole life supporting half of the back half of the car…say 500kg…and their are two of them…so 250kg each. A bearing of that size will have a static capacity of a couple of tonnes so the load is very low …and the stresses not even close to the yield point of the steels used in bearing races…even with aggressive shock factors applied.
The information in your Timken manual should make the clear distinction between brinelling which is “deformation” …and “false brinelling” which is more to to with “fretting”…a different phenomenon.

This is a bit off topic, but I just noticed the rear badging on your cat in those pics. “XJS Vanden Plas”??? This is the first time I’ve ever seen the VP designation on anything but a sedan … What the heck is on the VDP XJS model that is not on the base model?

btw, are the 5.3 tailpipes supposed to kinda flare a bit to the outside? This XJS that I just bought online - the tailpipes looked like that in the listing pics, which to me had me worried they were bent from possibly hitting something underneath the car. The 4.0 pipes are straight and go straight back.

Robin
These are not “extreme” shock loads in engineering terms.
Look a the position of the bearings. They are held in position by soft springs on the top and nice fat rubber tyres on the bottom. The tyres are the “appliers” of the shock loads and they are extremely “soft” in composition and via the compressed air in the tyre…and all the bearing has to do is accelerate the lower arm which has very little mass. A reasonable shock load is when a hammer hits a nail head…steel on steel. An extreme shock load is a large hydraulic impact hammer which will smash through 250 thick concrete. The jag rear hub load is in the low end of the spectrum. A reasonable clue to the magnitude of shock load is simply noise …which is an inevitable byproduct of the impact energy.

Spacer ring and extra ring made from 1.2mm wire.
The lip seal is thinner (6.3mm) than the original felt seal so the extra ring is needed to bring the seal at the right height.

**
Looking at the picture, Aristides - I’m a bit apprehensive…

The ‘spacer ring’ is not really a spacer? Isn’t it there to keep the outer race of the bearing in place? The extra thickness of the wire you used doesn’t seem to fit entirely into the groove - and may slip out under load, pushing the bearing out…?

No distance piece should be required for the seal - it is a simple press fit, to be positioned as required…