Hello still sorting this XJS out, tackled the AC not working, Put gauges on the system and it is fully charged, Blower runs but blowing on Defrost mode. AC clutch will not engage pressed the AC button nothing happens, Needs some advice, praying the Evap is ok do not want to tackle that job… Regards All and Thank you for all the previous help this site Rocks

Your probably need to check the CCM Climate Control Module located on the right side of the tunnel underneath the dash. The problem with that is they are NLA and good luck trying to find someone to diagnose or repair it.

Thank You AJ I will ck the relays first Any Idea which one is for the compressor?

Any Idea which one is for the compressor?

I’m not sure as I don’t anything in front of me to look at. I believe there are two or possibly three over there and they all look the same, just swap them out and see if anything changes

I google it I think it’s the second one back from the front of engine on r/h side, I found a CCM on E bait for 200 dollars i bought it just in case ,If I need it if not I will put it back on E bait

Your gonna need to make sure that the CCM is the exact same DAC# that is in your car, there are a lot of them floating around and they are not interchangeable.

The defrost only problem could also be as simple as a vacuum hose that came lose in the dash. If that is the case then you’ll be looking at dash removal - seats out, console out, steering wheel out.

. Yes I bought on for the 94-96 CCM . Well I tried another relay, whether it was the AC clutch I don’t know, however, I found my blower only works on defrost and only on #3 speed which is the highest,

Well I got this far with the fan problem it seems one of both fan controllers has Sh*t the bed , It’s a Common problem was the problem with my 94 as well I still remember what a PIA it was to drop and reinstall these blowers. so I am off to find Darlington transistors and the diodes to repair … I still have a Conundrum I really would like to refinish dash wood that would require total removal of the dash , and it would seem to make removal of the blowers easier, However if I just do the blowers and not remover the dash is still would have to remove the seats to access as I am a big guy and arthritic 74 yrs old not looking forward to working on my back again … Any advice would be greatly apprciated , Need someone who’s been there and done that…

Conundrum I really would like to refinish dash wood that would require total removal of the dash , and it would seem to make removal of the blowers easier, However if I just do the blowers and not remover the dash is still would have to remove the seats to access

The blowers can be removed without necessarily taking the dash out, but reinstalling them with the dash in is almost impossible. The only way to any of this work without removing the seats is to have some little kid do it, otherwise there just isn’t enough room. I’m not a big guy and it was still pretty difficult.

How far down the rabbit hole to you want to go? I went through the entire system, which meant not only everything I talked about above, but I went as far as pulling the whole hvac box out. The box houses the evaporator along with the heater core. Removing the dash is the only time you would ever be able to get that close to the box. If you do decide to trove the box I can pretty much guarantee that the evaporator will be full of debris, the same as the front radiator. That debris greatly diminishes cooling. The other benefit is being able to reseal the degradating foam gaskets that seal the various flaps shut when they are closed. You will also be able to clean out the heater core. There is certainly a lot to do that will prevent having go back in there for as lon as you own the car.

Thanks for your reply AJ well I made my decision to remove the dash and restore everything. as you did it makes sense. Now for another question, I ordered a set of new diodes that are the usual suspects did you replace the Darlington transistor too? Also, My courtesy lights work off the switch but not the door switch is there a shut-off switch I don’t know about or do I have another electrical gremlin? I believe British Autowood has a detailed description on dash removal on a facelift car. Unless you know of a better one.

I ordered a set of new diodes that are the usual suspects did you replace the Darlington transistor too?

Yeah, fumbled and ham fisted my way through ordering the diodes and replacing the transistor (This part of the job is not one of my strong suits) on the passenger side board. To be honest, other things got in the way of reinstalling the box, so I still don’t know if I fried the board or did a good enough job to make it work. Once I finish the rear suspension upgrades and get the cage back into the car I will finally get to plug it in and see if it works.

I’ve never had any issues with any of my car concerning the courtesy lights, you may need to remove the panel off and see what’s going on. 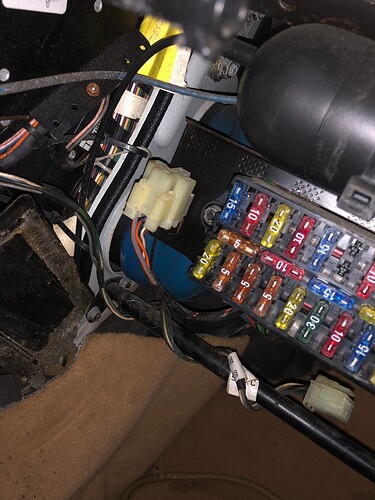 what goes here it is a relay socket but mine was empty Pass side Also how doe’s the side AC ducts come out of the dash? do they pry out of do they have nuts on the back?

do they pry out of do they have nuts on the back?

I believe there are blind nuts, I forget the size, though.

Update on NO AC I changed out the Darlington transistors and diode, I now have more than one speed on the blowers, However, the bellows will not move to change from defrost to heat and the AC still doesn’t work No light on the dash telling me I have AC the clutch is not engaging I have full Charge on AC system according to my gauges. I have changed out the piano board with another nothing changed. Presently testing blowers on the floor of the car before reinstalling. What can I ck next I did change the clutch relay with another and nothing . it was the third relay on R/H side of the car towards front of car I think. I think the weakest part on these cars is the Heat and AC system always seem to have a problem

Have you checked the refrigerant pressure sensor? Its on the passengers side of the engine.

However, the bellows will not move to change from defrost to heat and the AC still doesn’t work

Well, one of the annoying problems is I don’t know of any way to check that damn Climate Control Module. If you actually have the dash out, double check that all of the little vacuum hoses are connected. If that all checks out then you may have to dig deeper into that black box and check to see if the (I believe there are two) actuators that move the flaps are working (they can be checked with a 9V battery.) When you turn on the AC is the clutch on the compressor actually engaging?

OK I just ran the engine and cked the AC compressor clutch it is engaging now , However the AC button on the dash doe’s not light up . I wonder if I should try to install the other Piano module again?

I thought all the bellows doors were Vac operated?

Ok, the compressor is working, so that’s good. I can’t remember anything about the AC light that your talking about.
If you getting AC into the cabin and none of the vacuum hoses are disconnected then, as I said earlier the issue is in the box.
When I got to the point of thinking about removing the box, I thought long and hard about it, but ultimately decided to go for it because I knew that all of the padding needed to be changed, the heater core needed to be checked out, and it was the only way to verify the condition of the evaporator.
In your case, you will have to consider evacuating the system before even thinking about removing the box.