This one went for a whopping $390k. Yikes! Wondering if the buyer will actually follow through. 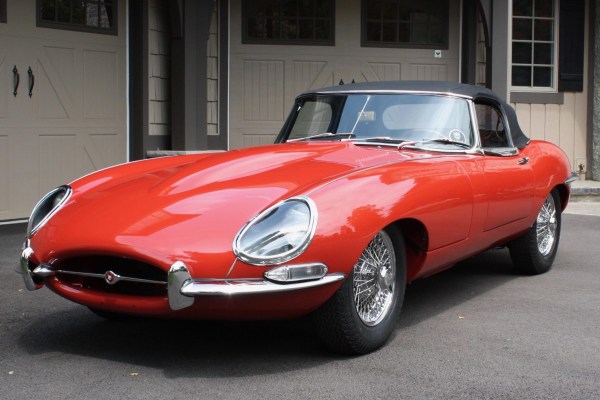 Bid for the chance to own a 1967 Jaguar XKE Series I 4.2 Roadster at auction with Bring a Trailer, the home of the best vintage and classic cars online. Lot #80,595.

I was/am wondering the same thing Tom, the jump from ~300K to 390K seemed a bit odd but maybe he’s an ‘Oil Sheik’?
Cheers,
LLynn

After the reasons given for the absence of photos with the top down, and refusal to demonstrate the car would move under it’s own power, the bizarre bidding sequence seemed to be entirely in keeping with this fantasy auction. Probably not a data point to use as an indication of a trend…

What happens if the highbidder fails? Does it go to the next highest? Could it be a ploy to stop the bidding? Get a friend to bid high to stop bidding so you have a chance at a lower number?
Tom

What happens if the highbidder fails? Does it go to the next highest?

A good question. I think that is up to the seller to decide. BaT have already taken their cut (5% with a $5K cap) from the high bidder’s credit card, and are pretty much hands-off once the bidding is over. If the high bidder doesn’t complete the deal BaT ban them (though anyone can create a new identity), and I imagine that they help the seller out by providing them with contact details of the next highest bidder so they can choose to negotiate if they wish. I’m aware of one auction that went this way when the high bidder defaulted. BaT also offers to re-run the auction in such circumstances (they rarely do this if the reserve is not met on the first auction), though in the case of this car I’d be surprised if a rerun would come close to the high bid from yesterday.

Well, if he is, his money is green. And, as I understand, car collections for such royalty in the middle east are generally stationary. Thus, he may consider that since the top has never been down, and the “new” car hasn’t yet been broken in, he can claim huge bragging rights.

Plausible, but I would think members of a royal family would be discrete with how they buy things (using buyer’s agents, shell companies, etc.). Using his name as his user ID is anything but discrete. My bet is this is fraud. The same user bought a ‘63 Corvette today as well.

The same user bought a ‘63 Corvette today as well.

It’s not uncommon for people to spend that kind of money on a beautifully restored car ( not making comment on this particular car) …… these types of cars never reach BAT or other selling mechananisms……… they are generally commissioned and enjoyed or if sold , ……sell quietly by word of mouth for these kinds of prices and more , depending on rarity model etc

Plausible, but I would think members of a royal family would be discrete with how they buy things (using buyer’s agents, shell companies, etc.). Using his name as his user ID is anything but discrete.

That was my thinking too. If this is a genuine bidder it seems more likely to me that Rashid Khalifa is a reference to the character of the same name in Salman Rushdie’s “Haroun and the Sea of Stories” children’s story.