Anyone changed a radiator?

Those cooler line fittings - what tool fits those (apparently metric) fittings on a late 40?

Have a spare rad but don’t want to start the job if I won’t be able to undo the fittings …any workarounds to release the fittings other than finding the correct tool?

Can’t help with the fitting size but just be careful to use plenty of penetrating spray, they are alli from memory and can just screw the threads off.

Robin - the fittings I’m having a puzzle over are transmission cooler quick-release A/C or fuel-line push on type that connect to the side tanks of the rad using an expanding retainer clip. But your advice is well heeded!

Can you post a picture? Its been a long time since I saw the ‘40 rad and I wasn’t recalling any push fit fittings.

On the 93 and 94 rads the ps and and trans fluid are cooled in the radiator side tanks - the connections are like a/c push fittings. Meanwhile, I’ve been watching a few youtube vids of guys making their own release tools for these fittings with teflon tape spools and sharpie caps trimmed to fit, so I think I should be ok, have a sharpie and an old roll of teflon tape!

have a look at 13 in the pic, that’s some jag repair tool, but you can see the two push fittings on each side tank where the aluminum hoses from the ps and tranny connect. 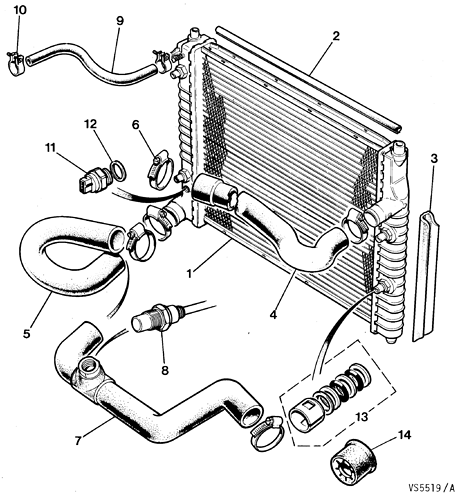 I just had a look at my rad and yes indeed there didn’t seem to be push fittings there after all, unless I’m missing something. 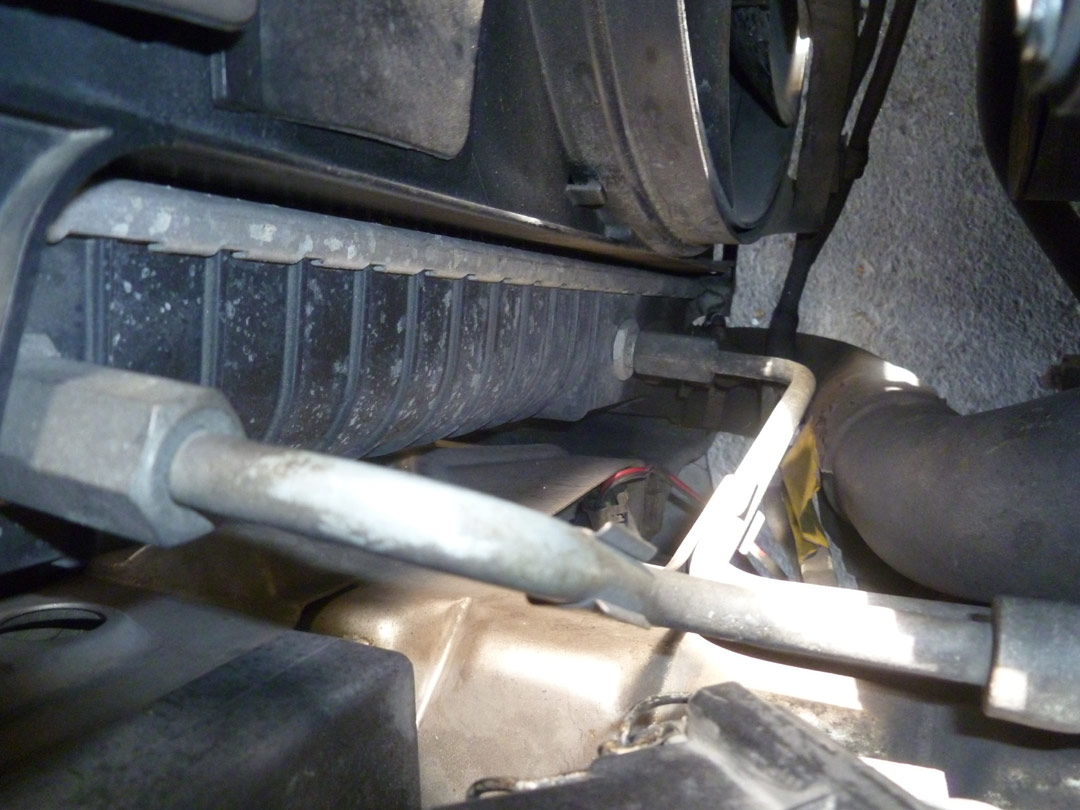 However it’s a bit confusing!
I’m almost sure I ran into the quick release push fittings when I salvaged the rad from my parts car, a late 94, a bit later than mine …AND DonB did a rad replacement on his '93 and that rad FOR SURE had the push-on fittings, see his photo album, here:

I guess I have to recheck my spare but hope to god the fittings are the same as mine or I’ll be out of luck for sure. Spare stash is across town so can’t check right away.

Larry, I was confused about the fittings that you mentioned. i didn’t remember seeing those push a/c type fittings on my rad so I ran out to my car and made these pics. They look identical to yours. 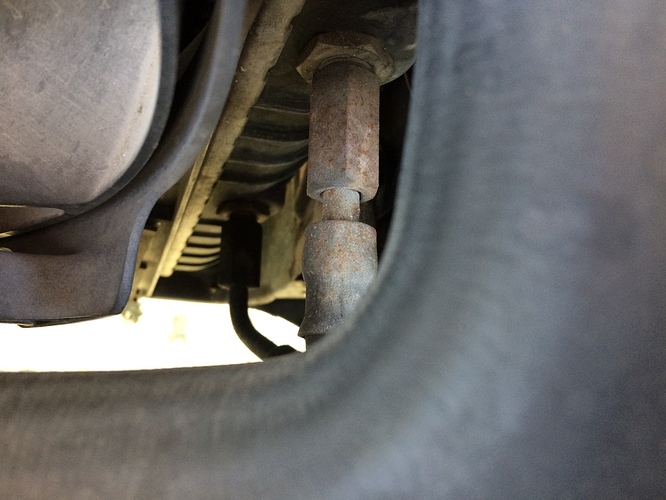 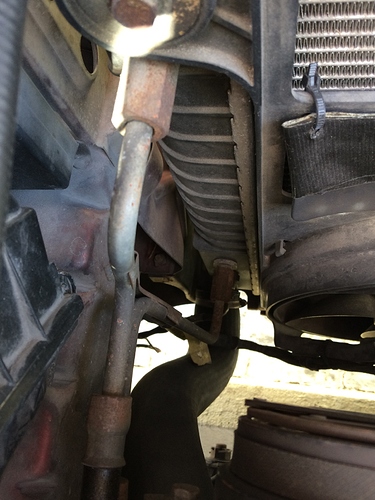 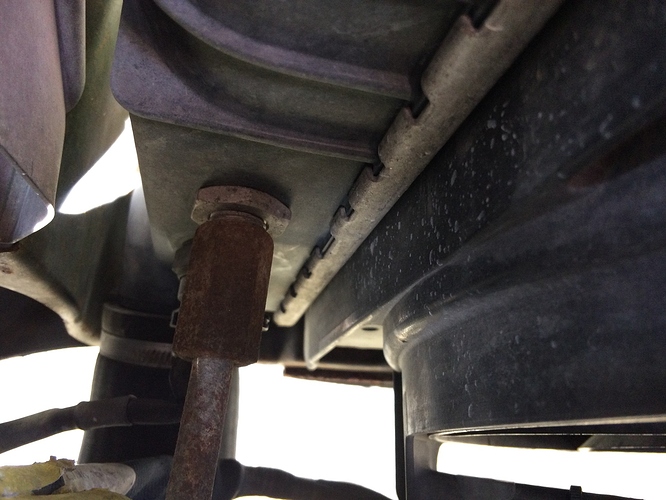 Yep that looks like what I remember. Definitely spray those suckers with plenty on penetrating fluid.

Ok Guys, I just got a ride over to my parts stash and had a look at the spare rad. Good news, the fittings are normal, un-screwable and not push-ons at all!
I guess I went down the wrong path referring to DonB’s rad removal pix and instructions as those on his 93 were definitely push-ons …again kinda weird because I also got an email from a guy in the UK with a 93 and his fittings were identical to mine, Robin and Joe’s …so what gives?
Did they use a different rad with push-on fittings somewhere in the middle of production? Weird! 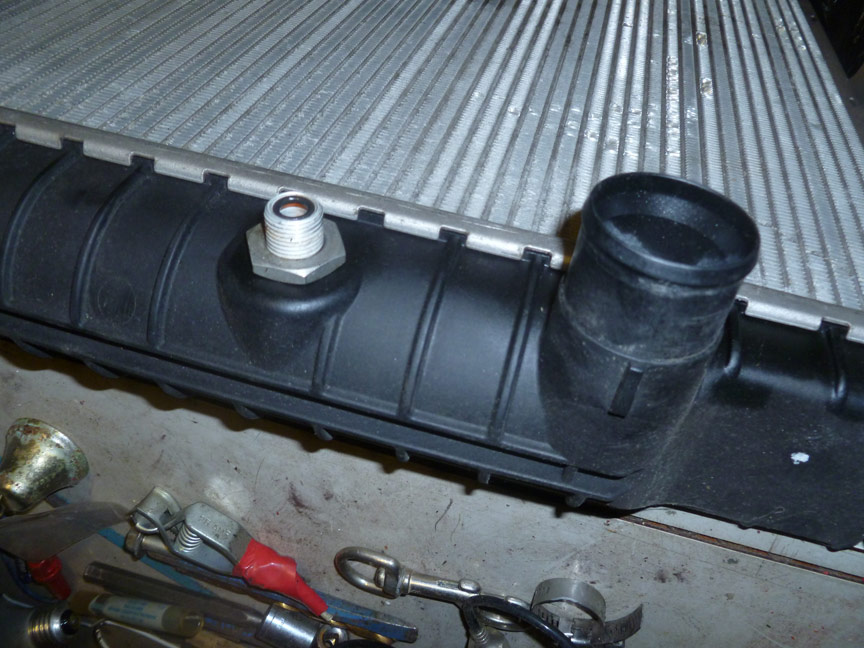 Larry, that’s a good looking radiator. I can’t answer your question about those push fittings. Maybe someone with an earlier model can tell us what kind of connection his radiator got.
Mine developed a leak a few weeks ago. I haven’t located it but I hope it’s at a spot where I can get to easily so I can solder it. Right now I don’t wanna take my car for longer trips although I got extra coolant and engine oil in the trunk (for the oil leak at the rear main seal).
So I guess the right side of the radiator cools the power steering fluid and the left side cools the transmission fluid?

Maybe someone with an earlier model can tell us what kind of connection his radiator got.

Joe - I know a guy with two 40’s, both 91MY, VIN range 6354xx to 6466xx and both of those cars have the same connectors as ours, regular threaded fittings.
Robin’s car had the same too, right?
All I can think of is that they were introduced for a short while somewhere in the middle of things, maybe late 92-early 93? I know Ford used them quite a bit so maybe that had something to do with it?

Mine developed a leak a few weeks ago. I haven’t located it but I hope it’s at a spot where I can get to easily so I can solder it.

My plan (if I couldn’t use the spare) was to try and repair it using the stuff A/C techs use, “LA-CO Heatstik”. My attempts at aluminum welding the condenser were miserable failures but when I discovered this stuff I successfully fixed the condenser and to this day have nice cold A/C.
LA-CO is heat activated epoxy with a 60 second cure time. You clean the area of the leak to bare shiny metal, heat it up the damage and just puddle it on.

When I fixed my condenser with it, I decided to reinforce it (it is a bit brittle) by coating it with a layer of JB weld. I just roughed up the LA-CO with some sandpaper and put a blob of JB over the whole area, Five years later, A/C still good. 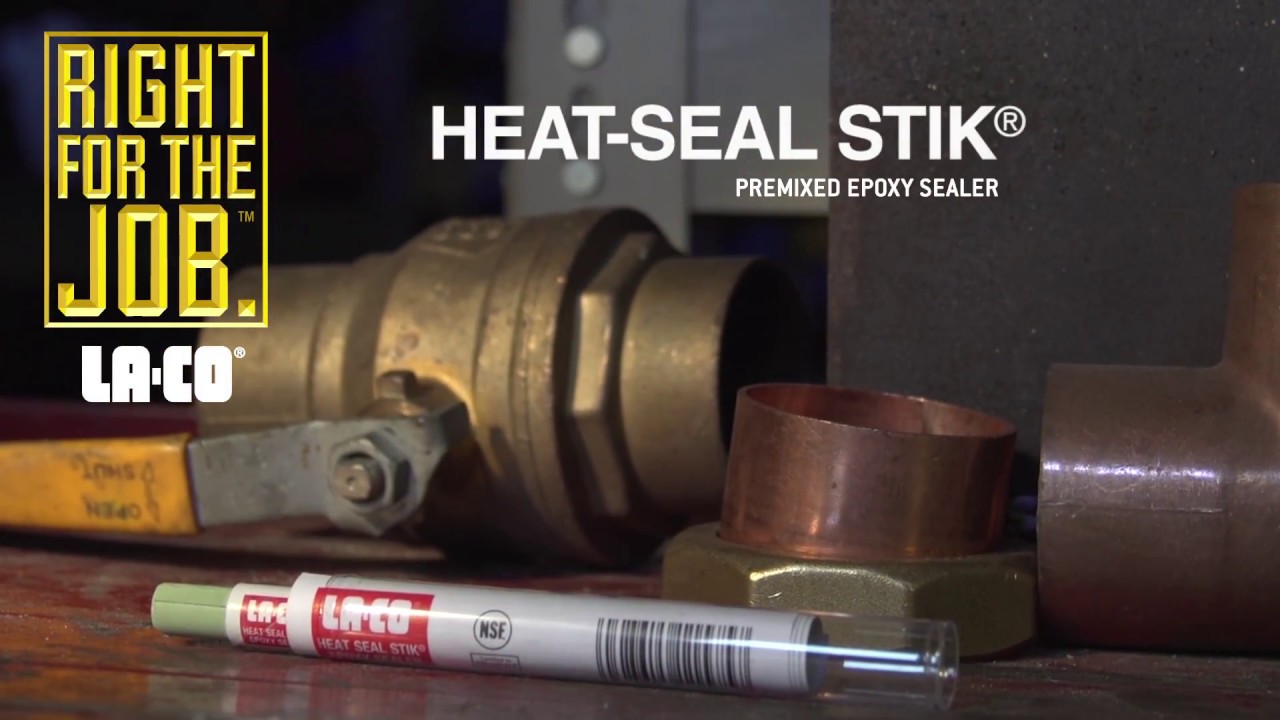 Ok, this is what I found out about the different fittings on the radiators …

The quick-fit rads were part number CCC5476, introduced at VIN 667829 and replaced at VIN 687219. All other cars, earlier and later, used radiators with threaded trans cooler line attachments.

Thanks for the info Larry. I’ll consider using the epoxy but first I have to locate the leak. Can you buy it in a store in CAN or you order if from online?

A quick and dirty fix if the leak is in one of the tanks is baking powder and super glue. Vee out the leak and drop powder on then super glue. Goes as hard as rock.

Robin, when you say “one of the tanks” you mean the side tanks, either the transmission or PS fluid tanks? In my case the green engine coolant is leaking from the radiator so I have to seal the aluminium part of the radiator.

Thanks for the info Larry. I’ll consider using the epoxy but first I have to locate the leak. Can you buy it in a store in CAN or you order if from online?

I bought it online from the USA as I remember.
Oh and I’m pretty sure the end tanks just have coils in them which are then surrounded by coolant - the tanks themselves are filled with coolant completely insulated from the cooling coils so if you have a hole in either side tank, it will leak coolant not fluid.

A quick and dirty fix if the leak is in one of the tanks is baking powder and super glue. Vee out the leak and drop powder on then super glue. Goes as hard as rock.

Used that many times restoring porcelain, not on the car so far but why not eh? Sounds good!

Thanks Larry, I didn’t know how the side tanks really worked. The coolant drops come from the right side of the radiator next to the drain plug but it’s not the plug that’s leaking. Gotta remove the plastic splash guard to have a better view.
BTW, have you seen when a friendly Canadian helps Brian and Stewie on the side of the road?
Funny, eh? 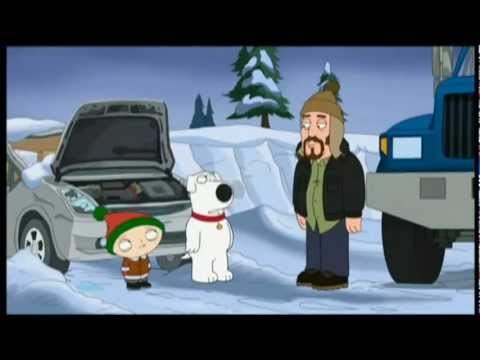 Now that WAS funny, eh?

The coolant drops come from the right side of the radiator next to the drain plug but it’s not the plug that’s leaking.

Same place as mine, but mine stops when I park up so I guess it only happens (for now) when the pressure is raised, i.e. engine running.
Pain in the ass though - my underscuttle is pretty much destroyed from parking lot stoppers and that may even be what has caused the leak. These cars are low in front for sure.