On this new forum site, you can edit your posts, there is a little pencil-shaped icon in the bottom right corner of the post you may want to amend. Try it next time :-)))

I am in the process of rebuilding my EFI harness also - 1989 XJS V12, Lucus. But I have run into a bit of a snag. I am confused about the polarity of the injectors. I have identified the colored wire (2 for for each bank that serve 3 injectors each; one for the odd, other for the even) and the two pink/black wires that do the same for each bank. The first question - are the pink/black wires the ground (-) and the colored ones the (+)? I saw a historical posts that indicated the opposite. The other question is how can I tell the polarity of the injector itself - it is my understanding that it makes a difference. My connectors don’t have a “+” indicating which side is positive, and couldn’t see anything on the injectors. I ran a continuity check on the old harness to ID which side of the connector was pink/black and which side was the colored. Assuming that the Colored are + and the pink black are - and looking at the connector face on with the clip “up” curved notch “down” I got:
1B - +
2B - +
3B - +
4B - +
5B - +
6B + -

I would have thought there was a more of a consistent pattern between the banks and the polarity would be the same for all. The car ran fine with the old harness in this configuration. I feel like I am missing something.

Insight would be greatly appreciated!

Injectors have no polarity. Connect it up whichever way you want.

great - and thanks for the reply!

Company in the UK called autosparks can make you a new loom… I bought an alternator loom from them this year.

I’m currently remaking an injector harness too. Still waiting on a couple of bits to turn up, and it’s been really cold and wet here, so I’ve sort of left it for a while.

Make sure you use the most high quality wire insulation you can find. I went with PTFE but it was a nightmare to find in the correct gauge in the UK. If you’re in the US there is a guy on ebay who sells lengths of it cut for a much more reasonable sum, but here it’s almost as if it’s 100m rolls of it or nothing.

On the 1991 onwards cars this is a bit more of a pain, the injector loom is taped toghether with some other wires (that weren’t there on the older ones) meaning you can’t remove the old injection loom that easily. I’m just going to run a second loom on top of it. Yours should be much easier to make neat!

Yes - thanks - I got some good wire from Del City - researched it and ended there. I am also running the harness from the back - on the outside/under the rail - out of the V - seems to make sense. However, you do have to pay attention to the 1 to 6 banks since they are now reversed fist wire off the harness is 6 instead of 1. I plan to put together the connectors and new end plug this weekend.

I think most of us route it in a similar fashion…or at least get it out of the Vee.

The high temp wire is great; I use it myself tho can’t remember the exact spec at the moment. However, I think most of the benefit comes from moving the loom out of the Vee.

However, I think most of the benefit comes from moving the loom out of the Vee.

PVC-insulated wire rated at 70C in the vee of an engine with 90C thermostats? What could go wrong?

I sorta disagree. IMHO, what’s most important here is getting wire rated at well above 100C in that harness. Getting it off the bottom of that vee is also handy, as things tend to get oily down in there. But I just raised mine an inch, supported at the level of the intake manifold gaskets, and that worked just fine. And visually it doesn’t look much different than OEM, a far cry from those cars where the injector harness is strapped to the fuel rail. 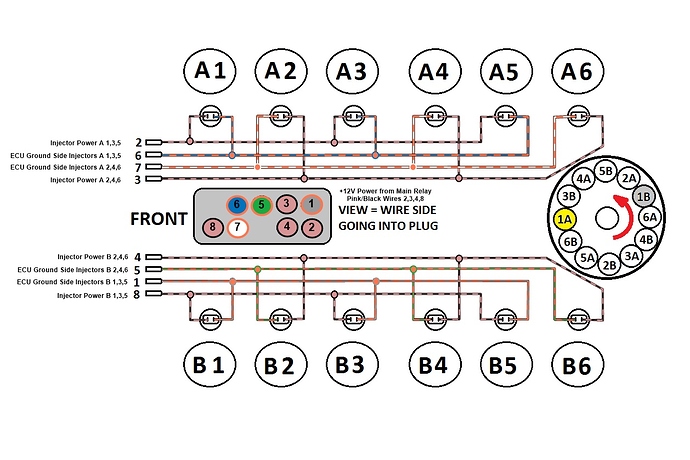 I used ordinary wire, and strapped it to the fuel rail, worked out fine.

Hey Paul the diagram is great - Thanks! I am at a break - waiting for a connector. I ordered an Aptiv/Delphi GT-280 10 pin connector that I hope will do the trick.

Its not all that important how the Pink/Black wires are hooked up other than having them hooked up wrong could make diagnosing why a bank is failing confusing. But the ECU grounds the injectors to control them, so the ECU doesn’t care where the power is coming from.

You should be able to figure out which wires go through which injectors by doing some ohm/continuity testing. For any Pink/Black wire there should be 3 injectors it feeds at around 2.5Ohms each (I believe). So that’s 0.133 Ohms in parallel… roughly… for any particular Orange/X-Color control ground wire.

Paul do you have a similar diagram for the Pre He with D jetronic injector wiring colour code. I understand wiring to the 8 wire amplilifer plug is different. Thank Al

I can’t say it’s similar. All I have is a version of the ENTIRE pre-HE circuit that I’ve colorized (so it has the wiring colors on that portion of the circuit). The early diagrams weren’t as good as the later ones. 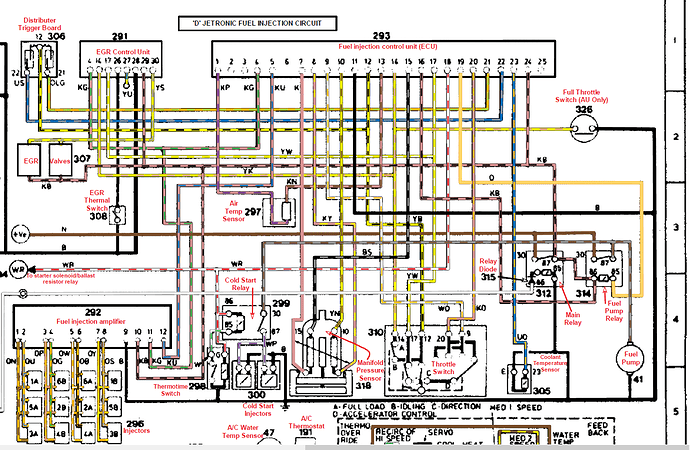 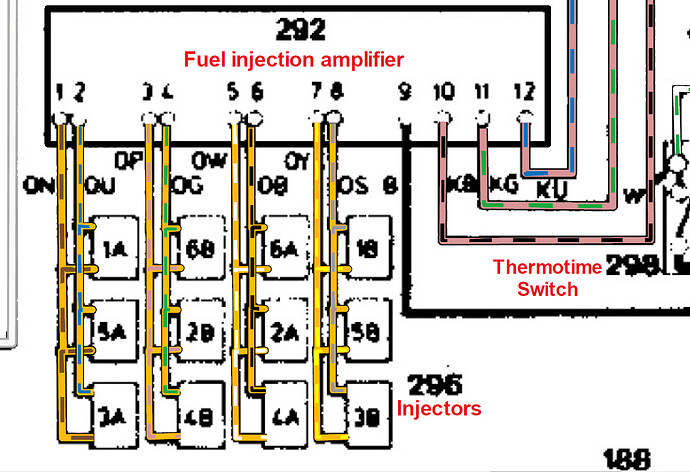 I just noticed what I think may be a mistake for #3 wire color. OP is likely Orange/Purple.

Thanks Paul that will be handy to make sure the power and grounds are conected to the correct pin numbers of the 8 pin amp plug.
From the wiring digrams the pin number are different between PreHe and the He.

I am in the process of bunding up the A and B bank injector harness and marking the individual new harness wires i have made up to match the 8 pin amp numbers. Thanks for your help Regards Al

Thanks for the info Paul - I had the pink/black supply lines to the injectors OK. It was from the main relay to the connector that had me stumped. However, a quick review of the wiring diagram and a continuity check - and I ID’ed which one was for the A bank and which was for the B. Harness done and installed - I was a bit conservative using the high temp wire, heavy duty shrink rap and high temp loom. It is a bit stiff (big surprise).